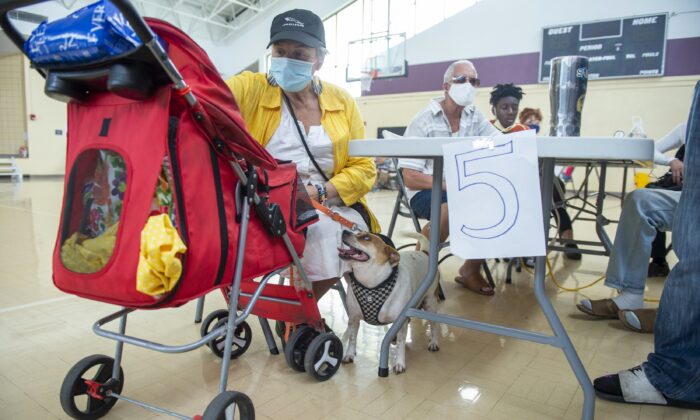 Viana Chacol, 65, and her dog, Chanel, rest at a cooling shelter at the Treme Recreation Community Center in New Orleans, La., on Sept. 2, 2021. (Chris Granger/The Times-Picayune/The New Orleans Advocate via AP)
US News

Four nursing home residents died in a warehouse in Louisiana this week, adding to the death toll from Hurricane Ida.

Over 800 nursing home residents, including those who died, were evacuated to a facility in Tangipahoa Parish ahead of the hurricane, the Louisiana Department of Health said.

Inspectors with the state tried visiting the site on Tuesday after hearing reports of “deteriorating conditions at the facility,” the department said Thursday. The inspectors were expelled from the property and prevented from conducting a full assessment.

All of the residents were rescued from the warehouse later in the week, according to Louisiana’s chief medical officer, Dr. Joe Kanter.

Fourteen were found to be in such bad shape that they required hospital care. Another four were dead. According to a coroner, three of the deaths were related to the storm.

“There are just no words,” Kanter told reporters at a briefing in Tangipahoa Parish.

The rest were taken to shelters or other nursing homes in a massive effort involving the use of buses, ambulances, and other vehicles.

State officials are investigating what happened.

“This is a serious and active investigation. We will be taking action against these nursing facilities, and will be making appropriate referrals to law enforcement,” the state health department said.

The residents were evacuated from seven nursing homes across four parishes. All are owned or linked to developer Bob Dean, according to local media.

Dean could not be reached by The Epoch Times.

He told WVUE-TV that elderly deaths are not out of the ordinary.

“Normally, we lose two to three a day because they are very ill,” Dean said. “I did the best that I could. I’m the only man that has a private evacuation center from Texas all the way to Florida. … That first day cost me over a million dollars to evacuate. One million dollars, and the government never pays me anything. I just do it because I have to save people.”

Unless a mandatory evacuation order is in place, nursing home operators decide when and where to evacuate. But they are required to provide safe conditions for their residents.

“When the situation degrades to the point that happened fairly quickly, starting on Monday, then the owner of the homes have an obligation to either move those residents themselves to a better facility or to ask for help. He did neither,” Louisiana Gov. John Bel Edwards, a Democrat, told reporters.

“We’re going to do a full investigation into whether the owner of these facilities failed to keep these residents safe, and into whether he intentionally obstructed efforts to check in on them and to determine what the conditions were in the shelter,” the governor added. “And if warranted, we will take aggressive legal action against any responsible party.”

Tangipahoa Parish President Robby Miller told WVUE-TV said the warehouse had no beds. Instead, there were mattresses on the floor.