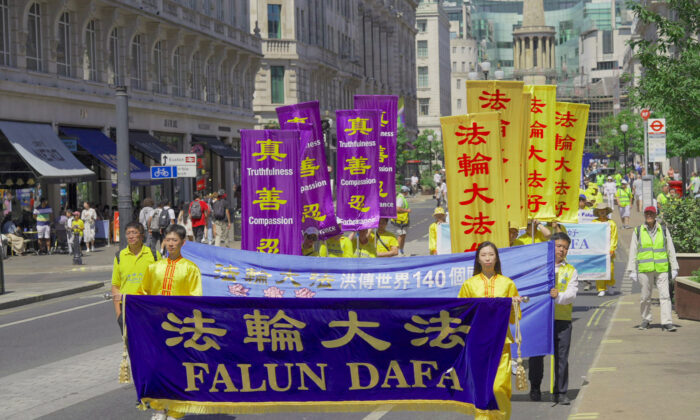 More than 100 Falun Gong adherents in the UK marched on Saturday to highlight the ongoing clampdown against the group in China that has lasted for 23 years.

Fourteen lawmakers wrote to condemn the persecution, saying the treatment of Falun Gong practitioners by the Chinese Communist Party is “completely unacceptable.”

Falun Gong, also known as Falun Dafa, is an ancient spiritual practice with a set of physical exercises and the doctrine of truthfulness, compassion, and forbearance.

Since it was made public in China in 1992 by Li Hongzhi, the practice has attracted millions of adherents whose testimonials pointed to the beneficial effects on their physical and mental health and their character.

But in 1999, the Chinese communist regime launched a campaign to eradicate the practice, with an official ban issued on July 20. The adherents have since been subject to harassment, extrajudicial imprisonment and killing, rape, torture, narcotisation, and live organ harvesting.

Imprisoned and Tortured for Her Belief

Yong Li was incarcerated in a number of prisons and detention centers before leaving China for the UK, including the infamous Masanjia Labour Camp, from which a letter highlighting the plight of Falun Gong practitioners was snuck into a box of Halloween decorations and found by a shopper in the United States.

Li, a 66-year-old retired steel worker, told The Epoch Times that she was dealing with marital problems in 1995 when a colleague recommended the practice, which she found helpful both to her health and to her relationships.

But on July 19, 1999, police started arresting people for doing the exercises. Li’s husband, also a practitioner, was detained for a night.

In December, Li decided to protest in Beijing’s Tiananmen Square, a last-ditch effort many practitioners resorted to as there was no official route to have their voices heard by the communist regime.

She was immediately arrested after getting to the square, which she said was swamped by plain-clothed police.

Many practitioners, including Li, refused to disclose their identities for fear of bringing trouble to their families and workplaces. They were transported out of Beijing by armed guards to different detention centres, Li said. She was sent to Shenyang, a city in Northeast China, and was passed around a number of facilities.

Police tried to identify Li and get her to renounce the practice, Li said.

She was whipped on the mouth with chopsticks, stepped on, stabbed in the ribs with coathangers, and forbidden to sleep for eight days straight. A policeman also dipped a sweeping broom in phlegm and then tried to force the broom into her mouth.

At one facility, an officer threatened to feed her narcotic drugs in order to extract information from her.

After the intimidation proved in vain, Li was told she was sentenced to three years in a labour camp, without any legal process.

Li started a hunger strike before being sent to the Masanjia Labour Camp and had to be let go from the camp soon after because a month of hunger strike and force-feeding left her on the brink of death.

After she returned home, her sister-in-law was told her social welfare payment would be cut off unless she could get her brother to divorce Li, prompting Li’s family to sell their apartment and hide elsewhere.

Before Li went on hunger strike in prison, Li was also subject to weekly blood tests and physical examinations. Li didn’t object at the time, thinking it was a good testimonial to Falun Gong’s health benefits, only to find out years later that practitioners are killed and their organs sold to transplant patients for profit.

Asked what her wishes are, Li said she hopes to end the persecution against Falun Gong in China so all practitioners can regain their freedom.

In 2019, an independent people’s tribunal unanimously concluded that prisoners of conscience had been—and continued to be—killed in China for their organs “on a significant scale.” It noted that adherents of Falun Gong had been one of the main sources of organ supply.

The tribunal published a 160-page report on March 1, 2020, reaffirming its previous conclusion, stating that there was “no evidence of the practice having been stopped and the Tribunal is satisfied that it is continuing.”

Adam Sharif, a lawyer who passed by the event on Saturday, said he was “really shocked” to find out how lucrative the trade is.

Victoria White, UK communications coordinator at The International Coalition to End Transplant Abuse in China (ETAC), said she’s happy that there have been some legislative changes in the UK aimed at ending the barbaric practice, including a provision in the Health and Care Act that meant UK citizens can no longer travel abroad for commercial organs.

“It was already illegal to buy or sell organs within the UK, but now they’ve added extraterritorial provisions, so this means it safeguards UK citizens from being complicit in these crimes by going to China to buy organs, when those organs may be coming from prisoners of conscience who are being killed,” White told NTD, an affiliate of The Epoch Times.

White said ETAC is now working with Global Rights Compliance, an international legal firm based in Hague, the Netherlands, which drafted a “world’s first” legal advisory report on mitigating human rights risks when interacting with international medical institutions and professionals in transplantation medicine.

“Now in the UK, we are trying to do what we can to use this new business and human rights advisory, and to speak to stakeholders: to hospitals, to medical institutions, to legal firms, to universities … and try and engage with them so that they understand the implications of collaborating in the transplant industry with China and what that means, and hopefully, try and cut some of those ties with that transplant industry so that we aren’t complicit in this crime.”

Sending his “best wishes” to the UK Falun Dafa Association, Hunt thanked the members for “bring[ing] the disgraceful treatment of Falun Gong to global attention.”

“I am part of a campaign in the UK to highlight and seek to outlaw the appalling practise of forced organ donation in China,” Hunt said in the statement. “After hearing the evidence at the China Tribunal, Sir Geoffrey Nice QC stated that Falun Gong practitioners were ‘probably the principal source’ of organ harvesting which has been ‘committed for years throughout China on a significant scale.’ We must do everything we can to help stop this vile practise.”