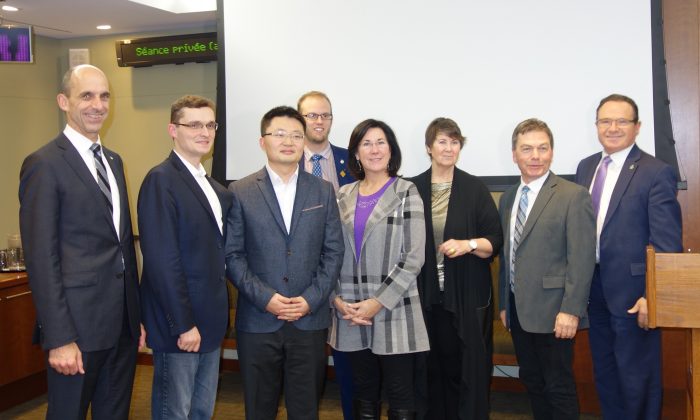 Senator Marilou McPhedran said tears came to her eyes while watching “Letter from Masanjia,” an award-winning documentary about a man held in a labour camp in China notorious for its brutal treatment of detainees.

The film tells the story of prisoner of conscience Sun Yi, who wrote a desperate SOS letter and hid it in a box of K-Mart Halloween decorations made by slave labour at the Masanjia Labour Camp. The letter finds its way into the hands of Julie Keith, a mother of two living in Oregon.

In the letter, one of several he wrote at great risk to himself and hid in packages bound for export, Sun details being jailed for his practice of the traditional spiritual discipline Falun Gong, also called Falun Dafa, and how he and others in the camp were being subjected to torture and brainwashing. Keith releases the letter to the media, which goes viral and eventually leads to the closure of China’s entire labour camp system.

“Like many people in this room, it brought tears,” said McPhedran following the screening on Parliament Hill on Dec. 9.

McPhedran added that she is “deeply concerned” about the case of Vancouver resident and Falun Gong practitioner Sun Qian, who was detained in Beijing in February 2017 while on a trip to China. Sun is one of the tens of thousands of practitioners who have been snared in the Chinese Communist Party’s campaign of persecution against Falun Gong that was launched in 1999.

“[The detention of] Canadian citizen Sun Qian and many, many other practitioners of the Falun Gong religious practice is clearly a violation of the U.N. Declaration of Human Rights, Convention Against Torture, and indeed the Canadian Constitution,” McPhedran said.

“We haven’t been able to bring her to safety. … It is time to regroup, reinforce, and to work even harder to bring her back to Canada.”

“Just to see the story tonight was very disturbing, to see how human rights are being violated in the prisons and the security issues surrounding it,” he said.

“[Sun Yi] had incredible courage to take a chance writing the letter in the first place, but then follow up on many occasions where his life would be at risk. He has that kind of perseverance and faith. Very, very commendable. I think he has a lot to teach all of us. … He did an excellent job living out what he really believes, standing firm and persevering.”

The screening was hosted by McPhedran, MP Cheryl Hardcastle, and MP Tom Kmiec. Hardcastle said she wanted to “be silent” in order to think more deeply about what she saw.

“Tonight I will be silent, thinking more and more of this,” she said.

“A movie like this is extremely profound and helpful for us. It makes us all think that we cannot give up. Sometimes it seemed these problems are so overwhelming and our hearts break, we feel so much anguish, but we cannot give up, it is too important.”

MP Steven Blaney said he was glad he was able to view the screening and recommended “everyone to watch the movie.”

“It’s very inspiring, It’s a lesson of courage, of hope, and also vigilance. It sheds some light on the situation of human rights in China, of the challenges, and of the great courage of the individual who wants to make the situation better.”

“I have seen things in my life but this is particularly—I find that this is so real, and so actual, it is really a masterpiece. I thank you for your courage as well. Sun Yi gave his life but you are risking a lot as well, and this speaks highly of you and your movie,” Blaney said.

Lee is not welcome in his native country because of his prior films about China’s human rights abuses. So in “Letter from Masanjia,” he teaches Sun Yi to use camera equipment via Skype. For over a year, Sun Yi secretly captures harrowing footage of his daily life as a human rights defender, leading up to his tense run from the Chinese authorities.

Lee said that the film, which has won several awards, was just released Dec. 4 on several digital platforms such as Amazon and Blu-ray. The more people who see it, the better, he said, so that people can learn of the urgent situation of Falun Gong practitioners in China, who can be arrested and tortured for simply handing out flyers to raise awareness about the violent persecution.

“I do hope Sun Yi’s story will catch on and people will, through him, learn about many, many other people like him in China whose stories we do not know, who are risking their lives every day even doing the mundane work of producing a flyer, a DVD, for the public to know what’s going on,” Lee said.

“The ultimate goal is, of course, to one day see my fellow Chinese will also enjoy the same freedom that people here in Canada enjoy. Now this is not something taken for granted for the Chinese people. They have been fighting very hard, but it is not an easy battle.”

Regarding Sun Qian’s detention, Lee explained there’s a way to help, and that is by going to LetterFromMasanjia.com and clicking on the “Take Action” tab, where people can send a letter to Prime Minister Justin Trudeau urging him to help have Sun freed.

“Despite holding a Canadian passport, she is now detained in China and being tortured, so we really hope that we can bring her back to Canada,” he said.