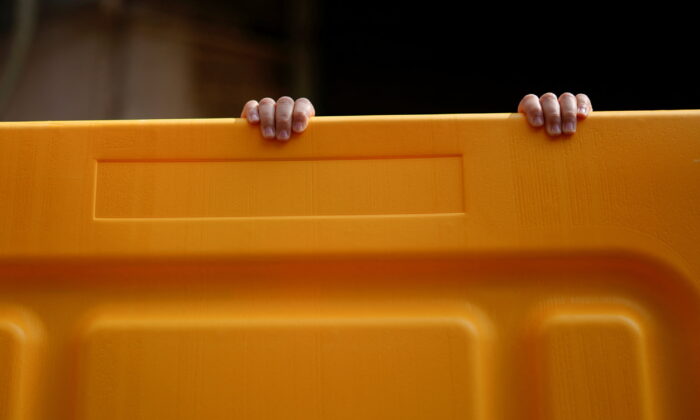 A child's hands on a barrier at an area under lockdown amid the coronavirus disease (COVID-19) pandemic, in Shanghai, China on March 26, 2022. (Aly Song/Reuters)
Australia

A group of researchers have conducted an overview of 33 mental health studies of 132,000 people during the first year of the pandemic and found that lockdowns doubled people’s odds of experiencing mental health symptoms.

Many studies on mental health have been undertaken but the speed with which they were conducted meant that the research was “generally of poor quality” and produced very mixed findings, the authors said.

Social restrictions also increased the risk of people experiencing symptoms of depression by over 4.5 times, stress by nearly 1.5 times, and loneliness by almost double.

Another key finding of the review that co-author and associate professor in social psychology Gery Karantzas found was that most of the mental health studies were rushed during the first year of the pandemic.

“​​This is because good measures of social restrictions were hard to come by in studies. Some studies didn’t detail the specific restrictions in place in various cities, or did not ask study participants to what extent they complied with restrictions,” Karantzas said.

He said that while there is room for improvement in the research, the existing literature has shown that the costs of social restrictions clearly outweighed the benefits.

“Although we have a way to go in the way we conduct research into the mental health effects of COVID-19 social restrictions, the initial research highlights these restrictions indeed negatively impacted the mental well-being of citizens,” Karantzas said.

Another survey from February 2022 of 1,000 people aged 16-21 years by ReachOut has found that stress about the future is on the rise because of the pandemic.

The most common age for this stress was between 14 and 16 years of age (40 percent).

The prevalent issues causing stress about the future were: study and exam pressures, being able to afford the kind of life they plan, being able to survive financially, and building a career in their chosen field.

“These insights confirm that now is an important time to continue to place a focus on supporting young people, in particular those aged 14-16 years.” ReachOut CEO Ashley de Silva said in a release.

“From the survey, we can see that almost 20 percent of young people surveyed had turned to a mental health professional to help them cope with stress about the future.”

Similar numbers were turning to online searches or websites (18 percent) and social media (16 percent) for support.

“Some of the positive self-help strategies young people told us they are using to help them cope with stress about the future included watching tv or listening to music (57 percent) and spending time with friends and family (50 percent),” Silva said.