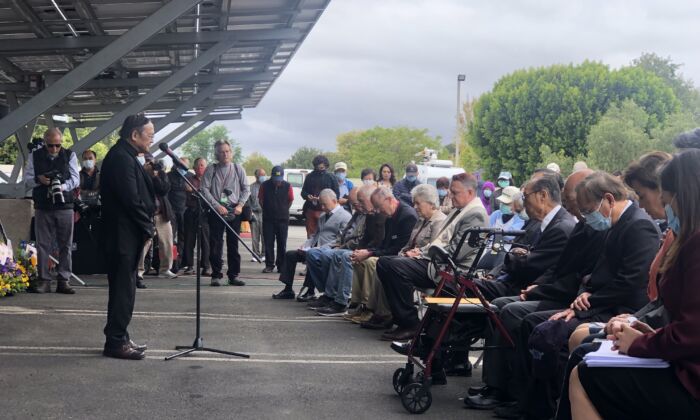 Pastor Albany Lee speaks to members of the Taiwanese community to mourn and honor the victims of a mass shooting at the Presbyterian Church in Laguna Woods, Calif., on May 21, 2022. (Brandon Drey/The Epoch Times)
Orange County Community

LAGUNA WOODS, Calif.—Members of the Irvine Taiwanese Presbyterian Church and leaders of the Taiwanese American community gathered on May 21 to mourn and honor the victims of a May 15 mass shooting that killed one and injured five.

At the start of the memorial service—held at the Taiwanese congregation’s lunch banquet at Geneva Presbyterian Church in Laguna Woods, California—attendants stood in silence for one minute in front of a display of flowers, in memory of the 52-year-old Dr. John Cheng, a local physician who was shot to death after—what people are calling—a selfless, heroic act that likely saved many lives at the mass shooting.

“Father [God] today, we come to you with tears and thanksgiving,” Albany Lee, the pastor at Irvine Taiwanese Presbyterian Church, said in prayer during the event. “Oh, mighty God, look, your church is suffering.”

“The church is still haunted by the terror,” Lee said gently and contritely, referring to the tragedy that occurred barely a week ago inside the place of worship.

“Help us overcome our fear and anger,” he said in prayer.

Lee shared a handful of scripture to those in attendance in honor of Dr. Cheng, reciting John 15:13, which says, “Greater love has no man than this, that a man may lay down his life for his friends.”

Officials said Dr. Cheng was killed when he charged at the gunman—David Wenwei Chou, 68, of Las Vegas—attempting to disarm him.

After Cheng collapsed, Chou’s weapon appeared to be jammed. Pastor Billy Chang then struck the gunman with a chair, and other parishioners pressed him down and hog-tied him with electrical cords before law enforcement arrived.

Chou likely drove from Las Vegas and arrived in Southern California on Saturday before going to the church on Sunday morning, according to investigators. He is accused of walking into the Taiwanese congregation’s Sunday service, mingling with parishioners, and then barricading multiple doors to block escape routes before opening fire during the banquet, where participants were celebrating the return of Pastor Billy Chang.

Chou allegedly chained some doors, tried to nail one shut, and put superglue in the locks of others, all while the congregants were eating lunch, Orange County Sheriff Don Barnes said. In addition to two semi-automatic handguns, Chou was also carrying incendiary devices and other weapons, the sheriff said.

On May 17, investigators determined Chou was born and raised in Taiwan—despite initial reports saying that he immigrated from China to Taiwan, and then later to the United States.

Authorities said the shooting was motivated by a grievance against the Taiwanese community over Taiwan’s political tensions with China.

The Epoch Times also reported on May 18 that Chou was once a member of a U.S.-based Chinese Communist Party (CCP) front group that has a mission to counter separatist movements, including those calling for Taiwan’s independence. The CCP deems Taiwan to be part of its territory, even though the regime has never ruled the self-governing island.

Chou made a brief court appearance on May 17 on the charges stemming from the shooting. His arraignment was postponed until June 10. He remains jailed without bail.

Authorities charged Chou with 10 counts, most notably murder for the killing of Dr. John Cheng.

Richard Lin, the deputy director-general of the Taipei Economic and Cultural Office in Los Angles, spoke to mourners expressing his grief for the victim’s families and urging the Taiwanese American community to support each other during these difficult times.

“Taiwan is a country comprised of different races and different backgrounds,” Lin said. “And we strongly believe that although we have differences, we share a common future.”

Mr. Su, a witness to the shooting, spoke in Taiwanese at the event. Su expressed his gratitude to Dr. Cheng and the church’s longtime pastor, Billy Chang—who struck the suspect with a chair—for their courage and called on the community to stop hate crimes.

Yorba Linda Councilwoman Peggy Huang, who grew up in the Geneva Presbyterian Church community, spoke on behalf of the church’s longtime Pastor Chang.

“He wants to express their deepest gratitude for the prayers, support, and that the community and the world have shown upon them,” Huang, who spoke to Pastor Chang before the event, said.

Rep. Young Kim (R-Calif.) also spoke during the event to express her support for the victims and community members.

“The shock you experienced last Sunday should not have happened,” Kim said. “There is no place in our community or society for any type of hate. We need to stand together.”

Before the event concluded with a benediction—or final prayer—church officials said the surviving victims had begun undergoing a healing process with trauma specialists to help them “unload their grief and anger in their heart.”

Taiwanese community members have also set up a fundraiser for Dr. Cheng’s children.

“Please keep us in your prayers,” Reverend Lee said. “We are not as strong as you think, but the Lord is great, and He is stronger.”