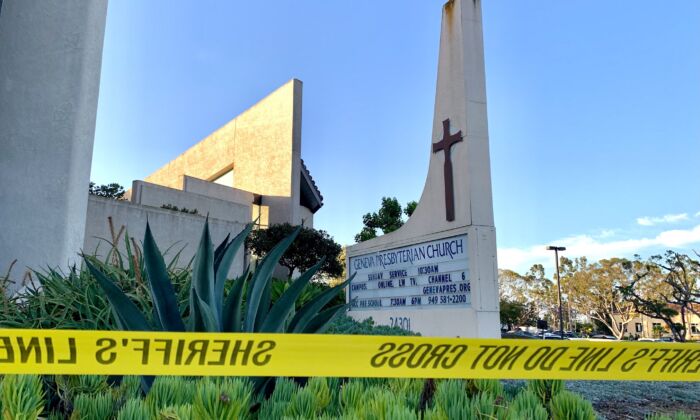 LAGUNA WOODS, Calif.—Taiwanese parishioners likely saved many after they hogtied a gunman who opened fire, killing one and injuring five, at an Orange County church on May 15, officials say.

“That group of churchgoers displayed what we believe is exceptional heroism and bravery in interfering, intervening to stop the suspect,” said Orange County Sheriff’s Department (OCSD) Undersheriff Jeff Hallock during a press conference outside of Geneva Presbyterian Church.

Churchgoers were enjoying lunch following their 11:30 a.m. Sunday service when an Asian man in his 60s opened fire.

Six people were hit, with one killed, four critically injured, and another with minor injuries. They were transported to three area hospitals.

Quickly, parishioners subdued the gunman and tied him with an extension cord while confiscating his two handguns—potentially sparing the lives of about 40 more people.

The name of the deceased will be released pending official identification by the coroner and notification of the next of kin.

“They undoubtedly prevented additional injuries and fatalities,” Hallock said while saying he does not believe the gunman is from the area.

Law enforcement arrived at the scene shortly after and utilized bomb canines to search for secondary devices on the property.

The suspect, 68-year-old David Chou of Las Vegas, was arrested at the church and booked on one felony count of murder and five felony counts of attempted murder.

The weapons detained from the suspect were two handguns—both were not ghost guns, Hallock said.

A motive for the attack remains under investigation.

Members of a trauma intervention program were also on scene attending to the members.

As of 6 p.m., the witnesses remained on the scene waiting to be interviewed by law enforcement.

Earlier in the day Sandra Chen, a daughter of two parents who were inside of the church during the shooting, arrived at the scene and waited behind the yellow police tape, attempting to get the attention of officers to make sure her mom had access to her medicine.

Chen’s father was sent to a local hospital to be treated for a gunshot wound to his foot.

Meanwhile, her mother remained inside the church after a bullet brushed against her shirt, barely missing her skin, Chen said.

Cynthia Conners, Laguna Woods Mayor Pro-Tem and member of the church, arrived at the scene in the late afternoon.

Conners, who has been a member of the church since 2016, said that the Tawainese group moved from Irvine about five years ago. She worries that the group may have been targeted.

The shooting follows a mass shooting in Buffalo, New York that left 10 dead in a supermarket on May 14.

Another shooting at a Texas flea market on Sunday also left two dead and three injured.