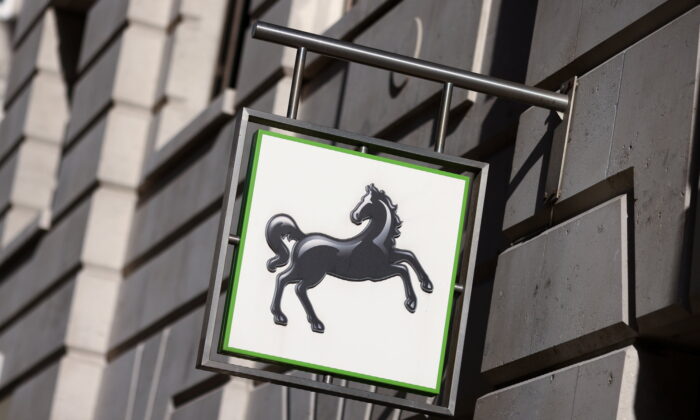 Signage at a branch of Lloyds bank in London on Oct. 31, 2021. (Tom Nicholson/Reuters)
Companies

LONDON—Britain’s biggest domestic lender Lloyds Banking Group contacted 2 million of its 26 million customers in May after identifying they could need extra support to cope with soaring food and energy prices and rising debt costs.

The UK’s largest mortgage provider outlined options including debt consolidation, household budget reviews, and spending control tools to customers it felt could be caught in the crosshairs of an escalating cost of living crisis, a spokesperson told Reuters.

The outreach to 1 in 13 of Lloyds’ borrowers and account-holders by phone, email, and text messages coincided with UK inflation hitting a 40-year high and offers insight into how banks are seeking to tackle financial woes before they spiral.

Lloyds said it was unable to provide a figure for June, adding it regularly contacted potentially vulnerable customers on a large scale.

During the COVID-19 pandemic, Lloyds arranged debt repayment holidays for 1.3 million borrowers as part of a coordinated forbearance drive by lenders, regulators, and the government.

Lloyds’ move to get ahead of an economic slowdown may spark alarm among policymakers, given the bank’s standing as a bellwether for the UK economy.

“All banks must be worried about when and how this crisis will impact asset quality. Why would you contact 2 million customers in this way if you had no such concerns?,” said Roger Gewolb, founder of lobby group the Campaign for Fair Finance, who also called on banks to step up affordability checks on new borrowing.

The Bank of England warned last week the economic outlook for Britain and the world had darkened and lenders needed to bolster capital buffers to better weather the storm.

Concern about the rising cost of living was reflected in the bank’s decision to hand a 1,000 pound one-off payment to the majority of its staff last month.

Charity StepChange reported a 12 percent month-on-month increase in new clients seeking debt advice to 14,000 in May and said the cost of living was now the second most commonly cited reason.

One-in-six households in Britain are in “serious financial difficulties”, research published this week by abrdn Financial Fairness Trust and the University of Bristol showed, from 1-in-10 in October.

Lukasz Krebel, economist at the New Economics Foundation, said he welcomed moves by lenders to advise customers on how to restructure debts or avoid unexpected charges but such support would only help “at the margin.”

“Better budgeting offers only an illusory solution for individuals and families whose real incomes have fallen below what they need for basic necessities,” he said.

By Iain Withers and Sinead Cruise