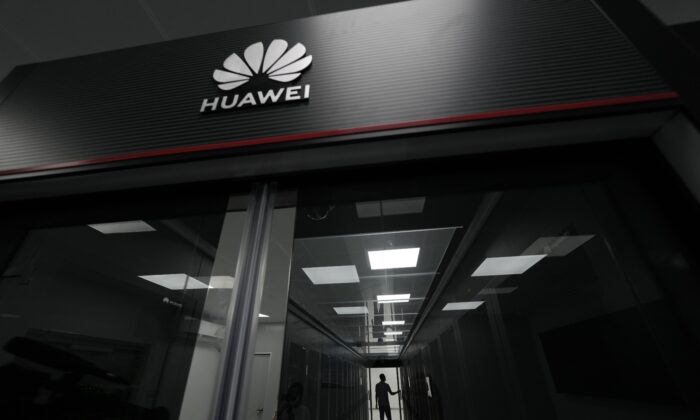 A technician stands at the entrance to a Huawei 5G data centre at the Guangdong Second Provincial General Hospital in Guangzhou, in southern China's Guangdong province, on Sept. 26, 2021. (AP Photo/Ng Han Guan)
Canada

It’s been more than two months since Prime Minister Justin Trudeau said his government will announce “in the coming weeks” its decision on whether to ban Chinese telecom giant Huawei from Canada’s 5G network. But as Ottawa drags its feet on a decision, reports on Huawei’s alleged espionage activities continue to mount.

Margaret McCuaig-Johnston, senior fellow at the University of Ottawa’s graduate school of public and international affairs, says the decision to ban Huawei is a no-brainer, considering the “overwhelming evidence” that Huawei equipment has been used to spy for the Chinese Communist Party (CCP) around the world.

To date, Canada remains the only country among the Five Eyes intelligence-sharing alliance that hasn’t made a decision regarding Huawei and 5G. The other four countries—the United States, the United Kingdom, Australia, and New Zealand—have either banned or taken steps to ban Huawei from their 5G networks, citing the company’s links to Beijing.

“The government of Canada has no choice but to ban it here,” McCuaig-Johnston told The Epoch Times.

McCuaig-Johnston, who was vice-president of the Canada-China Friendship Society from 2014 to 2016, noted Chinese state-owned and private enterprises are often used as the CCP’s data collectors and are in fact legally obligated to do so.

“[Chinese law] requires … that any Chinese company spy on behalf of Chinese agencies if requested, and to keep that spying secret,” she said.

Warnings about Huawei’s threats to national security have long been voiced by the intelligence community.

The latest exposé comes from a Washington Post report based on a review of over 100 Huawei marketing presentations. The report notes that many of these presentations were marked “confidential,” and the slides cover surveillance functions specific to police or government agencies, suggesting that “Chinese government authorities may have been the intended audience.”

According to the Post, of the more than 3,000 PowerPoint slides downloaded from a public-facing Huawei website before the slides were removed last year, five slides stood out. The slides outlined “a surveillance solution” between Huawei and another company, with dates ranging from 2016 to 2018.

The companies involved include Chinese artificial intelligence company iFlytek Co. and facial recognition company DeepGlint, also known as Beijing Geling Shentong Information Technology Co. Ltd. Both were sanctioned by the U.S. Commerce Department in October 2019 and July of this year respectively, for human rights violations and abuses against Uyghurs, Kazakhs, and other members of Muslim minority groups in the Xinijiang region.

The technology co-developed by iFlytek and Huawei, as stated in the 2018 presentation, can identify individuals by first obtaining “the voice audio of the target,” and then comparing their voice against a large database of recorded “voiceprints,” the Post reported. The slides did not provide direct detail on how the voice audio of a “target” is obtained, but another slide lists audio from “phone recordings” and “smartphone apps” as inputs.

In another marketing presentation, Huawei’s and DeepGlint’s “One Person One File” facial recognition system was touted as aiding public security in Urumqi, the capital of the Xinjiang Uyghur Autonomous Region, and had been in use there since 2017—a time period coinciding with the mass detention of Uyghurs in the region.

Three other projects involved prison and detention centre monitoring, tracking “political persons of interest” and criminals, and monitoring of employees and identifying customers in retail stores.

In a statement to the Post, Huawei denied any knowledge of the projects mentioned in the presentations.

In an invitation-only video news conference on Dec. 10, China’s ambassador to Canada Cong Peiwu said Canada will “pay a price” should the federal government decide to ban Huawei technology from the country’s 5G network.

“Of course, they will pay a price for their erroneous deeds and actions,” he told a small group of Canadian and Chinese reporters.

Cong also claimed that Canadian citizens Michael Kovrig and Michael Spavor, who were captured in China in retaliation for Canada’s arrest of Huawei executive Meng Wanzhou, had “confessed to their crimes” before their release from prison in September.

“The information reviewed by Chinese authorities shows that the evidence of the crimes is indisputable,” he said.

Kovrig and Spavor were arbitrarily detained in Chinese prisons for over 1,000 days after Meng was arrested on a U.S. extradition request in Vancouver in December 2018.

McCuaig-Johnston says Kovrig and Spavor had “nothing to confess.”

“They are completely innocent and were taken hostage for almost three years by the Chinese state,” she said. “[Chinese leader] Xi Jinping should confess this harm to two innocent Canadians and apologize to them.”

Former Canadian ambassador to China David Mulroney says Cong’s threats are a reminder to stay away from the Chinese regime.

“Beijing wants us to obsess about potential retaliation, a classic CCP psy-ops tactic, best ignored. It’s harder to ignore Cong’s verbal assaults on 2 innocent Canadians. But his obnoxious conduct reminds us why we need distance from PRC influence/control,” he said on Twitter on Dec. 11.

Conservative Sen. Leo Housakos says Cong is not acting in good faith as ambassador to Canada.

“This same Ambassador has been making unacceptable remarks since his arrival at his current post, including threatening parliamentarians,” he told The Epoch Times.

“I’ve expressed my concerns about him in the past and have asked the government if he has been called in by Global Affairs for a discussion on what is and isn’t acceptable during his time here as a guest of Canada.”

As for Trudeau’s comment that he would soon come up with a decision on Huawei, Housakos isn’t very optimistic.

“We’ve been hearing that for years, including during the recent election in which we heard we would know of their decision within a few weeks,” he said.

When asked for comment on the Huawei issue, Public Safety Canada said the government is reviewing potential companies that have the ability to participate in the country’s 5G network.

“While we cannot comment on specific companies, an examination of emerging 5G technology and the associated security and economic considerations is underway. This review includes the careful consideration of our allies’ advice,” spokesperson Magali Deussing said in an email.

Deussing said Public Safety Canada is working on the issue together with three other government departments as well as the Communications Security Establishment and the Canadian Security Intelligence Service.

“We will ensure that our networks are kept secure and will take the appropriate decisions in due course,” the spokesperson said.

Housakos says Canada should take a tougher stance against the CCP overall, adding that the recent announcement by the federal government in joining the allies in a diplomatic boycott of the Beijing 2022 Winter Olympics is not enough.

“We shouldn’t be sending our athletes there at all, both because of our moral and legal objections to the human rights abuses being carried on by the communist regime of China and because of the very real threat to our athletes’ safety, as evidenced by the kidnapping of the two Michaels,” he said.

“Canada must not find a new direction for its China policy, since China has established that it is no longer Canada’s trusted partner,” she said. “We must pivot to develop deeper relations with other countries in the Indo-Pacific region.”

McCuaig-Johnston says the government must also consider reports of Huawei’s alleged spying activity on different government officials in their decision whether to ban the company from Canada’s 5G network.

“[Huawei] was used to spy on the calls of the prime minister of the Netherlands, and Chinese activists in Holland,” she said.

In the Netherlands case, Dutch landline and mobile telecommunications company KPN, which had been using Huawei technology since 2009, was previously warned of espionage activities by Dutch domestic intelligence service AIVD.

A 2010 report made available to KPN confirmed Huawei’s surveillance activities such as eavesdropping on Dutch mobile network customers—including the prime minister and government officials—obtaining personal contacts from mobile devices, and having the potential to disable the entire network.

The report was kept confidential until the Dutch newspaper De Volkskrant wrote an exposé in April on Huawei’s operations.

In 2019, two Huawei employees were accused of spying for Beijing in separate cases in Poland and the Czech Republic.

Polish authorities arrested Wang Weijing, former sales director of the company on Jan. 11, 2019, based on allegations that his work with Huawei was a front to spy for the CCP. Huawei fired Wang the next day, stating his “alleged actions have no relation to the company.”

In July 2019, two former Huawei employees in the Czech Republic told Czech public radio that they collected and shared sensitive client information with the Chinese authorities. The data was entered into an internal database managed by Huawei’s headquarters in China, in which the targeted clients included state officials, mainly department directors or deputy ministers, who would then be invited to a conference or a trip to China.

Huawei has repeatedly denied working with the Chinese regime.

The Epoch Times sought comment from Global Affairs, which replied that it would defer to Public Safety Canada’s response. Sport Canada did not reply to a request for comment.

The Canadian Press, Reuters, Donna Ho, and Kelly Song contributed to this report