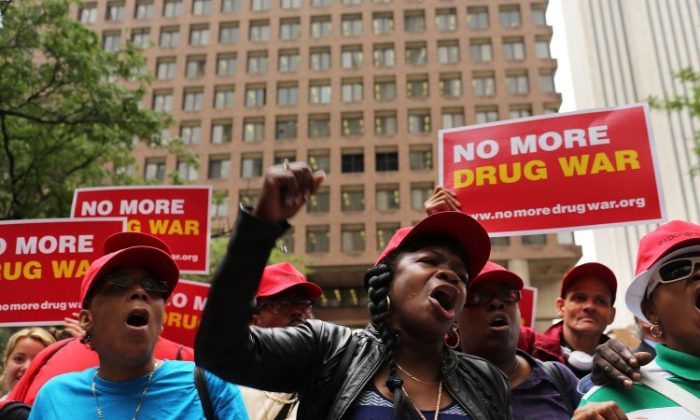 Marijuana legalization advocates and members of community groups attend a rally against marijuana arrests in front of One Police Plaza on June 13, 2012 in New York City. The recent passage in Colorado and Washington of propositions declaring marijuana legal for personal use has changed the U.S. War on Drugs. (Spencer Platt/Getty Images)
US

The 2012 election was a game changer in U.S. marijuana law—for the first time in over 70 years, two states legalized the plant for recreational use. It’s a defiant break from long-standing federal prohibition, yet other states are considering a similar path. Is America going to pot, or is there more behind legalizing marijuana than just an excuse to get high?

To date, 18 states and the District of Columbia have legalized medical marijuana, but voters in Colorado and Washington have taken another step: ending prohibition.

While the two laws differ on details, voter referendums passed in both states essentially grant cannabis the same restrictions as alcohol: permitted only for adults over 21.

To some, marijuana is a panacea of health and happiness. To others, a slothful scourge. As with any modern controversy, numerous studies make a case for both sides.

But it is the changing attitude toward legislation that is finding more common ground. You can find many unexpected legalization allies in an organization called LEAP (Law Enforcement Against Prohibition). Founded in 2002, the group consists of individuals who have fought on the front lines of America’s drug war, including police, judges, prosecutors, and federal agents.

Founding LEAP member and Board Chair Jack Cole has witnessed the effects of U.S. drug laws up close and in practice. Cole retired as Detective Lieutenant after a 26-year career with the New Jersey State Police. More than half of his career was spent in narcotics, mostly undercover.

“When I got out, I felt very bad about my role in implementing what today I’ve decided is not just a failed drug policy, but a self-perpetuating and constantly expanding policy disaster,” Cole said. “Every year it’s worse than it was the year before. And every year we try to correct for it by throwing more cops and more money at it.”

To understand Cole’s change of heart, you have to consider the federal policy it’s breaking from—the War on Drugs.

Cole offers a compelling array of facts and statistics detailing the tragedies of America’s longest running “war”: the rise in gangs and violence, the enormous racial disparity in policing and prosecution, and the alarming increase in unsolved murders, robberies, and rapes that correlate closely with a system incentivized at every level to focus on drug arrests.

“[Police] don’t want marijuana legalized because they get overtime pay; they get better salaries; they get promotions; they get top-of-the-line equipment, all based on the number of arrests they make,” said Cole. “This is considered by cops the low-hanging fruit.”

But after 42 years, a trillion-and-a-half in tax dollars, and 46 million arrests of nonviolent drug offenders, Cole says America’s War on Drugs has had little to show for itself.

“We should make marijuana legal so we can keep it out of the hands of our children, who have told us in every government survey for the last 30 years that it is easier in the U.S. to buy illegal drugs than it is to buy beer,” Cole said as part of his research-based list of reasons. “Why? Because they get carded when they ask to buy beer.”

“The House I Live In” is a film that attempts to portray a sense of the devastation the drug war has caused. The film won the highest award for a documentary at the 2012 Sundance Film Festival, and is a sobering look at American drug laws—from their history as “thinly veiled instruments of racial control,” to today’s mandatory minimum sentencing, which critics say does more damage to individuals and families than the drugs themselves.

Filmmaker Eugene Jarecki says the drug war has essentially taken a health problem—addiction—and turned it into a criminal problem, designed to reap political and economic gain. He says the only reason more people aren’t outraged by the policy is because it hasn’t touched them in ways they can easily see.

“If they haven’t lost their brother, or uncle, or cousin, or child, or grandchild to the voracious jaws of the drug war yet, they may not have done the math of how disruptive it is,” he said.

According to a recent Rasmussen poll, 82 percent of Americans say the drug war has failed. Legalization advocates point to U.S. alcohol prohibition as the cautionary tale, and surprising policies in Europe for the cure.

Cole says that like alcohol prohibition, it’s illegality that makes marijuana so dangerous, producing an “obscene profit motive” for what is essentially just a weed.

“It grows anywhere, and yet this weed is worth almost as much as gold, ounce for ounce,” said Cole. “That’s nuts—it’s just a weed! If it were legal, it would have almost zero value.”

According to DEA estimates, U.S. marijuana sales account for 60 percent of the profit for Mexican drug cartels—profit that Cole says could be instantly wiped out if the weed were legal and regulated.