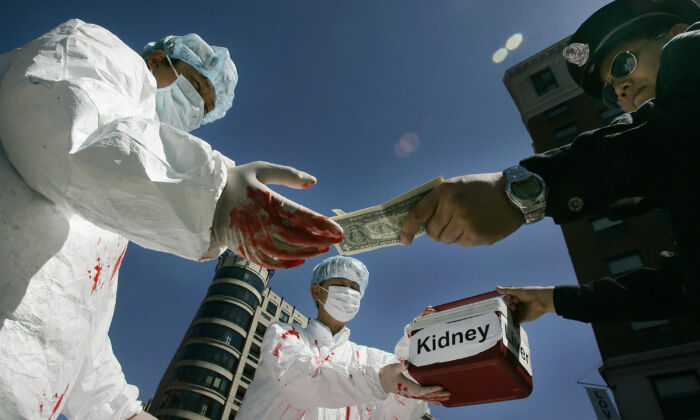 By Nicole Hao and Cathy He
biggersmaller
Print

Evidence of large-scale forced organ harvesting has cast a shadow on China’s organ transplant system for more than a decade.

Now an internal document analyzing organ allocation and transplant data in a Chinese province has revealed systemic reporting anomalies by hospitals. The anomalies cast doubt on the credibility of China’s official organ registration system, which may further point to state-sanctioned organ extraction from prisoners against their will, according to an expert’s analysis of the report findings.

The report, obtained from a trusted source, had been compiled by the China Organ Transplant Response System (COTRS), a body set up by China’s National Health Commission (NHC) in 2011 to register and allocate organs. Under this regime, organs registered in COTRS are matched and allocated to patients in need.

“This is really ridiculous,” Dr. Torsten Trey, executive director of medical ethics advocacy group Doctors Against Forced Organ Harvesting, told The Epoch Times in an email. This large number of transplants being entered into COTRS only after the surgeries indicates “systematic malpractice,” he said.

Since 2015, the Chinese regime has been claiming that organs for transplant come only from voluntary donors. In an ordinary organ allocation program, potential organ donors should be reported to the allocation system (in this case, COTRS), which then matches the organs to suitable recipients.

“But here, the organs [were] allocated without COTRS,” Trey said.

“This could be a strong hint that organs are harvested on demand.”

In 2019, an independent tribunal found, after a year-long investigation, that the Chinese regime has forcibly harvested the organs of prisoners of conscience for the transplant market “on a substantial scale,” a practice that continues today.

The primary victims are detained Falun Gong practitioners, it found. Adherents of Falun Gong, a spiritual practice, have been persecuted by the Chinese Communist Party for more than two decades, with millions having been detained in prisons, labor camps, and other facilities, according to the Falun Dafa Information Center.

Trey said that because thousands of organs appear to have bypassed the allocation process, the entire system can’t be trusted.

“Once the process is breached, anything can happen.”

Trey suggested that COTRS might just be an “empty shell” or a “sugar coating for Western doctors.”

“Western doctors are being deceived that COTRS is similar to other organ allocation programs,” he said.

The COTRS report analyzed organ allocation and transplant data in the eastern Chinese province of Zhejiang from Jan. 1, 2015, to April 13, 2018. Alongside COTRS data, the report draws upon data from companion NHC databases, the China Liver Transplant Registry, and the Chinese Scientific Registry for Kidney Transplantation, as well as information from hospitals’ organ procurement offices.

The report said that, nationally, 2,036 organs were registered in COTRS without sources specified. Trey said that this again demonstrated sluggish reporting “not to the standard of Western allocation programs.”

It also found that 104 organs were allocated to hospitals in Zhejiang but were ultimately not used for transplant. This figure represented 2.6 percent of the organs registered in COTRS in the province during the time period, according to data cited in the report.

That more than 100 organs—or even any organ—would be allocated to a hospital and not be used would be “100 percent impossible” in other regions with developed transplant systems such as the United States and Europe, Trey said.

In the case of an organ recipient passing away before the transplant surgery, then the hospital would need to inform COTRS to suspend the organ transfer or reallocate it, he said, noting that it was unlikely that more than 100 patients would die before their transplant.

“If those organs were not used, and not reallocated, that would suggest a sluggish organization or such an abundance of organs that really, nobody would care about them,” Trey said.

In the report, COTRS also identified several issues in the system that indicated that hospitals in Zhejiang may have “falsified medical data, manipulated organs’ distribution, and cheated [the COTRS system] to get donated organs.”

It found more than 1,400 instances of a donor’s or recipient’s data being changed within one hour before transplant, or new recipients being added to the waiting list just before they received the transplant.

“This is awful,” Trey said, adding that it demonstrates fraudulent practice by hospitals.

“If made public to the Western transplant community, it should cause outcry about bad practices.”

The Epoch Times found that one of the hospitals identified in the report as an authorized hospital that performed transplant operations, Shulan Hospital, is not on the Chinese regime’s official list of transplant hospitals.

“If this hospital is not officially a transplant hospital, what other hospital is performing transplants [without authorization]?” Trey said.

COTRS found that five hospitals that were not authorized to conduct organ transplants had performed 43 transplant operations during the statistical period.

A 2019 study published in the scientific journal BMC Medical Ethics found that there was “highly compelling evidence” that the Chinese regime was systematically falsifying its organ donation data. It found that the official figures conformed almost precisely to a mathematical formula, a quadratic equation.

Despite heightened scrutiny on China’s organ transplant practices, Beijing is gearing up to expand the industry.

Even as the CCP virus ravaged China in 2020, China’s organ transplant industry conducted business as usual, with no “obvious organ waiting time delays,” according to a July investigation by the U.S. nonprofit World Organization to Investigate the Persecution of Falun Gong. One nurse in the Guangxi region told the investigators that, despite fears of COVID-19 infection, they would “do the surgery whenever there is one,” only that they “won’t go crazy like during the pre-pandemic times.”

Huang Jiefu, former Chinese vice health minister and head of the China National Organ Donation and Transplantation Committee, boasted at a conference in October 2020 that China had become the second-largest organ transplant country in the world.

“During this COVID-19 pandemic, organ donation and transplantation was developed in a very smooth and high efficient way in our country,” Huang said.

He added that China could become the largest organ transplant country within three years if it could solve three “bottleneck problems,” being “high cost, shortage of transplant capability, and lack of organs.”

The NHC changed transplant rules in August last year to make it easier for doctors and hospitals to be authorized to perform organ transplants.

“There is growing evidence that the Chinese Communist Party has and continues to harvest organs from prisoners and members of Chinese religious groups,” bill co-sponsor Sen. Tom Cotton (R-Ark.) said at the time.

“It’s past time to hold Beijing accountable for these heinous acts.”