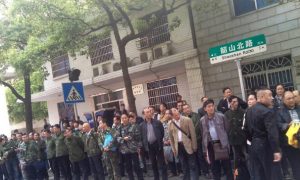 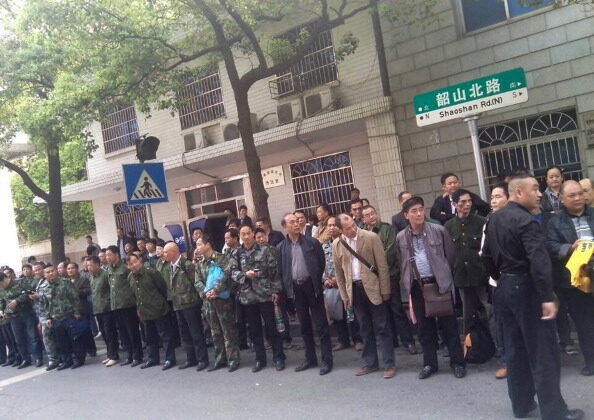 This undated photo shows former soldiers participating in a protest outside the provincial government building in Changsha, central China's Hunan Province. Marginalized and misunderstood, Chinese Vietnam veterans—who fought in a little-celebrated war with its southern neighbor—risk beatings and prison in a new battle with authorities. (STR/AFP via Getty Images)
Social Issues

In China, the growing number of mass protests by veterans over their rights and benefits has become a sensitive issue for the Chinese Communist Party (CCP) in recent years. The Epoch Times recently obtained a government document from a trusted source that reveals how petitioners are being suppressed by the authorities. One China observer said that the CCP suppresses veterans through draconian measures to “maintain stability” and solidify its rule.

The Epoch Times obtained a document from the municipal government in Dandong city, Liaoning Province.

In 2018, three mass protests occurred between May 31 to June 12, according to the document titled, “Report on the Verification and Investigation of Military-related Petitioning,” issued by the Dandong City Public Complaints and Proposals Administration to the Party Committee of Dandong City on June 23, 2018.

On May 31, 75 veterans from local companies in Dandong gathered at the municipal government office complex and appealed to the authorities by holding up banners, kneeling on the ground, and sitting quietly.

On June 11, over 110 veterans protested in front of the city’s Railway Station Square to appeal for their rights—a few protesters delivered speeches, while many were seen holding up  banners and sitting quietly.

On June 12, around 230 veterans protested in front of the provincial government complex.

Despite the peaceful protests, Chinese authorities were concerned about the number of protesters at the demonstration sites. The report claimed that “the retired military personnel got an opportunity to unite, exchange information, learn from each other, and increase their influence, creating multiple negative impacts on future stability maintenance and reconciliation work.”

The report noted that the number of veterans at protest sites were increasing and the petitioners were well-organized.

The group “has a tendency to intensify [the situation] and won’t stop until their goal is achieved,” it said.

According to the document, the petitioners have strong ties among themselves and with other similar groups, and these veterans are well organized at the petition sites because they are divided into different teams. It said that there are seven groups of veterans over the social media platform WeChat, with nearly 400 members.

The report said the group works quickly and is able to evade the monitoring and tracing by the police. The petitioners frequently change cell phone SIM cards that are not registered under any real name. They intentionally take a detour and travel in private cars or trucks to get to their petitioning destinations under the cover of darkness.

Hsin-Hsien Wang, a Taiwan expert on China affairs said that the main reason for this high level of mobilization is that various veteran organizations have been set up by local veterans to facilitate communication—these organizations include the Chongqing Disabled Veterans Organization Committee, Guizhou War Veterans, Henan Revolutionary Disabled Veterans’ Rights, Shaanxi August 1 Veterans, and Hebei War Veterans. He noted that these networking groups are widespread at the city, county, and provincial levels. Some of the groups are established at the national level such as the National Association of Veterans of the Two Participations and the National Veterans United Association.

The “Two Participations” group refers to veterans who have participated in the CCP’s Vietnam War and veterans from Nuclear Unit 8023, a military unit in charge of nuclear weapons tests.

According to the report, the then-Secretary of Dandong Municipal Party Committee was frustrated at the situation: “The city has sent two Standing Committee members to Shenyang to work [on controlling the petitioners], and more than 100 county or district leaders and police officers participated in the work, but why wasn’t this [sending people to Shenyang to control the petitioners] reflected [in the report]?”

The report listed suggestions for future “stability maintenance” work related with veteran petitioners, including setting up special organizations that are responsible for veteran groups; strengthening the collection of personal information of all the military veterans, targeting the leaders and organizers by alienating them from the group, “implementing humane care” to appease the veterans in order to prevent them from petitioning.

A reporter from the Chinese language Epoch Times reached out to the office of the Dandong City Public Complaints and Proposals Administration, but the director of the office refused to respond to questions related to veterans.

According to the document, there are 2,114 veterans working in the city’s enterprises, of which 288 veterans were laid off—that is the main reason why they have frequently petitioned for their benefits.

The CCP Uses Both Hard and Soft Measures to Control Veterans: Expert

Hsin-Hsien Wang, a professor at the Graduate Institute of East Asian Studies of the National Chengchi University (NCCU) in Taiwan once wrote in an analysis, “Veterans have a variety of qualities that scare the [CCP] government.”

In 2018, Wang published “An Analysis of Recent Veterans’ Protests in China” in Prospect & Exploration, a monthly publication of the Taiwan Ministry of Justice Investigations Bureau.

Wang estimated that about 3 million veterans are from the “Two Participations” group and about 1 million are those who were discharged during China’s arms control and nuclear disarmament from 1985 to 1987. (In 1985, the CCP announced to reduce its military personnel by one million by 1987, which was known later in China as the “Great Disarmament.”) However, due to a large number of fake veterans, Wang believes that getting an accurate number of the total number of veterans in the country is “a headache” for the CCP.

In the past two decades or so, military imposters paid for a veteran status to get access to good job placements and veteran-related benefits, and various government departments and hospitals were involved in providing them with fake identity documents. This indirectly impacts the benefits of true veterans, according to Wang.

The petitioning and protesting veterans have demonstrated astonishing mobilizing capabilities, Wang wrote in his analysis.

One example is the protest in October 2016 outside the CCP’s Central Military Committee office complex in Beijing by thousands of veterans. Security was on high alert as the incident occurred at a sensitive time when two significant events took place in the capital city.

“These veterans came from at least nine provinces and cities, and the timing of the event was very sensitive, as it coincided with the annual Xiangshan Forum attended by official delegations and military experts from nearly 60 countries, and the eve of the 18th Plenary Session of the 6th Central Committee of the Communist Party of China,” Wang wrote.

Wang noted that the large-scale veterans’ mobilization is mirrored by other groups.

“It is of concern that this kind of mass mobilization is not only happening to veterans, but also to truck drivers who went on strike in June [2018],” he said.

The soft measures include payments of benefits and improvements of veterans’ incomes. But local governments have failed to carry out these measures. And when veterans complain, authorities respond with draconian measures, he said.

“It is expected that the ‘rights defense’ of veterans will be a huge challenge and a sensitive issue for the CCP,” Wang concluded in his analysis.

On June 19, 2018, a group of veterans from Zhenjiang city, Jiangsu Province went to relevant government departments to inquire about veteran-related policies. They were suddenly surrounded by police and later beaten by unidentified thugs, who ran into the municipal government’s office buildings and hid themselves there. Upon hearing about the incident, other veterans from nearby cities in Jiangsu and from other provinces came to Zhenjiang to support the local veterans. Police beat the veterans, and nine veterans were arrested on June 20. In 2019, they were sentenced to two to four years in prison.

Hong Ning and Gu Qing’er contributed to this report.