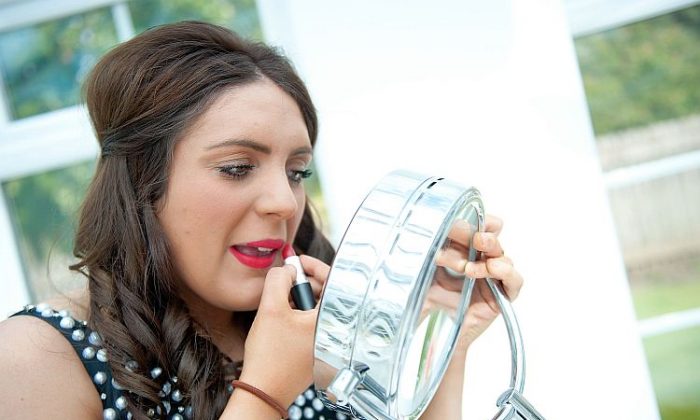 A young woman applies lipstick before a school prom in this file photo. The FDA recently tested 400 lip colors of lipstick for traces of lead. Despite finding traces in lipstick, the agency said it was not a safety concern. (Bethany Clarke/Getty Images)
US

Women are painting their lips with lipstick containing more lead than what was reported a few years ago. Twice as much of the neurotoxin was found by the Food and Drug Administration (FDA) in a recent analysis of several brands of lipstick.

Four hundred lip colors were tested and the results varied widely. L’Oreal’s Maybelline Color Sensational topped the list with 275 times more lead than the least contaminated colors—more than seven times higher than the average of all lipsticks tested. Another L’Oreal product placed second in lead levels.

“Our initial findings, as well as our expanded findings posted in December 2011, confirm that the amount of lead found in lipstick is very low and does not pose safety concerns,” the FDA said in a statement.

Lead in cosmetics is not regulated by the FDA, but concern among consumers prompted a closer look. When the agency first released reports of lipstick lead levels in 2007, scientists found little reason to worry. While they discovered that many lip colors contained lead, regulators considered the amount to be safe for cosmetics.

Critics say the FDA has spent years studying lipstick but hasn’t assessed how much lead actually gets into the body of a typical lipstick consumer.

“The FDA has previously stated that there is no potential for harm with lipsticks with lead in small amounts,” said Stacy Malkan from the Campaign for Safe Cosmetics, “which leads you to believe they may be wrong.”

The consumer coalition aims at improving safety requirements of cosmetics and personal care products on the U.S. market, particularly lipstick.

“Because it’s a product that does get ingested into the body, levels of lead are even more concerning,” said Malkan. “Women put them on their lips several times a day, and it is something that builds up over time. It adds up to potentially significant levels that could cause a problem.”

The Campaign for Safe Cosmetics is pushing federal regulators to set an upper level cap based on the lowest amount of lead companies can achieve—the same regulatory principle the FDA uses to set limits of lead in candy. It’s a standard that Malkan argues is quite conservative.

“They set candy limits, not on the assumption that this level is safe, but because that’s the best that companies could do in the manufacturing process,” said Malkan. “So we think they should use that logic when trying to look at lipstick instead of trying to figure out what level is safe, because there is no safe level of lead exposure. They should look at how companies can get it down to the lowest possible levels.”

According to the FDA’s list of lipsticks ranked for lead contamination, the issue of limits doesn’t seem to be dictated by manufacturing cost. Malkan notes that Wet and Wild, one of the least expensive brands available, also showed the lowest levels of lead. L’Oreal’s Color Juice had the second least.

Manufacturers say they don’t add lead to lipsticks intentionally, but raw materials used to make lip colors are already contaminated. Malkan says that because lead in gas, paint, and other products was permitted in the United States long after it was banned in other countries, it has become a very ubiquitous pollutant.

Experts say it is more common for lead poisoning to build up over time with repeated exposures to small amounts of lead. Research has shown that lead is much more harmful to children than adults because of how it affects nerve and brain development—suggesting that the younger the child, the more harmful lead can be.

A study released by the U.S. Centers for Disease Control (CDC) in January concludes that even low levels of lead exposure can harm children. Due to the damage the toxic metal can have on cognitive and endocrine function, the CDC is calling for a strategy that emphasizes the prevention of all lead exposure.

“The recent science on lead says there’s no safe levels for children, that any level of lead can be a problem, and the reason why we think that’s significant is because kids experiment with lipstick and teenagers use it,” said Malkan. “But the most concerning exposures would be developing fetuses, so pregnant women getting exposed to lead is a problem. If we want to protect children from toxic exposures we need to protect women who are pregnant or who one day hope to become pregnant.”

So how do you know if your favorite lip color contains high levels of lead? The FDA has posted the lead levels of the lipsticks it tested on its website. But if your brand isn’t listed Malkan recommends that consumers contact the manufacturer for details.

“I think it’s a good idea to avoid lipsticks that are on the top half of that FDA list,” said Malkan.

FDA says it does not believe there is a safety concern from the results in the recent analysis. But, “we are evaluating whether there may be a need to recommend an upper limit for lead in lipstick” the FDA site says.