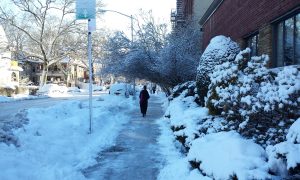 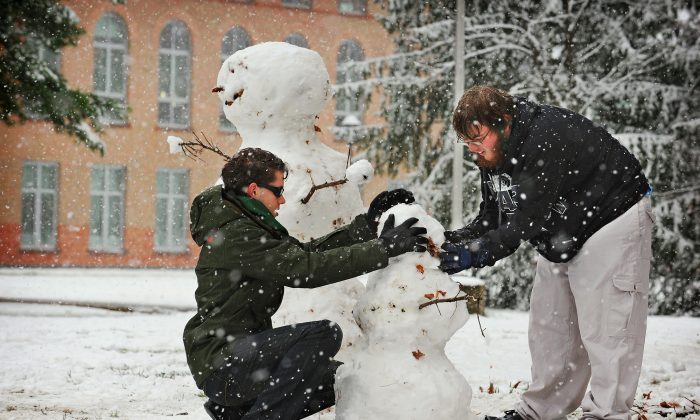 Clarkson University students, sophomore David B. Josephs, left, of Potsdam and freshman Dallas J. Blowers, of Watertown build a snowman at Clarkson University in Potsdam, N.Y., Monday, Nov. 17, 2014. More than a month before the arrival of winter, forecasters said snow off the Great Lakes could fall through Wednesday afternoon at a rate of five inches per hour in spots, and that wind gusts of up to 45 mph had the potential to make travel nearly impossible along sections of the New York State Thruway and Interstate 81. (AP Photo/ Watertown Daily Times, Jason Hunter) MANDATORY CREDIT
Photo Gallery

BUFFALO, N.Y.—Parts of New York measured the season’s first big snowfall in feet, rather than inches, on Tuesday as 3 feet of lake-effect snow blanketed the Buffalo area and forced the closure of a 132-mile stretch of the state Thruway.

The waist-high snow blown by strong winds stopped even pedestrians in their tracks and motorists abandoned vehicles where they got stuck. National Weather Service meteorologist Tony Ansuini said the storm was dumping 3 to 4 inches of snow per hour.

“There are some significant main arterials in the community that are basically parking lots,” said Erie County Executive Mark Poloncarz, who declared a state of emergency and issued driving bans for the southern section of Buffalo and more than a dozen suburbs.

The Thruway Authority said white-out conditions caused by wind gusts of more than 30 mph forced the closure of Interstate 90 in both directions from the Rochester area to Ripley, on the Pennsylvania border 60 miles southwest of Buffalo.

Brian Krzeminski watched the snow pile up outside the south Buffalo convenience store where he worked overnight and served free coffee to the motorists and pedestrians who came in to get out of the blinding snow.

In a region accustomed to highway-choking, mass school-closing snow storms, this one is being called one of the worst in recent memory. At one point, nearly half of the town of West Seneca’s plows were bogged down in heavy snow, officials told The Buffalo News. In neighboring Orchard Park, the highway superintendent called the rate of snowfall “unbelievable,” while next door in Hamburg even police cars were getting stuck in the deep snow.

The National Weather Service warned that the snow off the Great Lakes would continue at least through Wednesday, affecting also Interstate 81 between Syracuse and the Canadian border.

Lancaster, just east of Buffalo, reported 42 inches by 9 a.m., while just to the south, in Orchard Park, there was 36 inches. But typical of lake-effect snow, areas just a few miles away, including downtown and north Buffalo, had seen just a couple of inches.

State troopers were using all-terrain vehicles to deliver blankets and other emergency supplies to motorists stranded on the Thruway overnight, said state police Capt. Ed Kennedy. It wasn’t known yet how many people were stuck in their vehicles Tuesday.

“Other than wishing they weren’t stuck in traffic, they’re warm and safe in their vehicles,” he said.

The Tug Hill region on the eastern edge of Lake Ontario, notorious for its yearly snow totals, was bracing for 2 to 3 feet of snow.

The National Weather Service said the Lake Michigan shoreline could get 6 to 16 inches of snow by Tuesday, while 4 to 18 inches was forecast along Lake Superior.