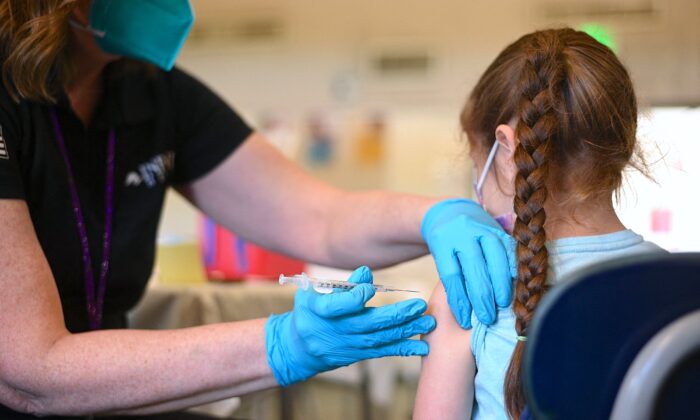 A nurse administers a pediatric dose of the COVID-19 vaccine to a girl in Los Angeles on Jan. 19, 2022. (Robyn Beck/AFP via Getty Images)
Southern California

The Los Angeles Unified School District (LAUSD) is recommending delaying the deadline of its COVID-19 vaccination requirement for students until the summer of 2023—in alignment with the state’s timeline.

Superintendent Alberto Carvalho recommended the district postpone its student vaccine mandate from August 15, 2022, to July 1, 2023, according to an April 28 statement—two weeks after the state’s health department announced the delay of its student vaccine mandate from July 2022 to July 2023 because the vaccines have yet to be fully approved for children under 16 by the Food and Drug Administration.

Carvalho came to the decision after consultation with health experts and the district’s medical director, citing high COVID-19 vaccination rates among students 12 and older and low transmission rates in the school community, according to the statement.

“We know that students do best when learning in the classroom with their peers,” Carvalho said in the statement. “Due to the high vaccination rates among students 12 and older, low transmission rates in our schools and our nation-leading safety measures, we have preserved in-person learning in the safest possible environment.”

About 84 percent of students 12 and older have been vaccinated against COVID-19, according to an April 28 report (pdf) released by the district.

The LAUSD saw a spike in cases—about a 5 percent increase—after spring break when “mainly symptomatic people were being tested.” However, after spring break in April—which was after the district lifted its mask mandate on March 23—COVID-19 test positivity rates have remained below one percent, according to the report.

The report also cited a study—by the Clinical and Translational Science Institute at the University of California­–Los Angeles (UCLA)—on in-school transmission rates that reported no estimated classroom transmission in the district since January 31, 2022, after the Omicron surge peaked.

“We studied positivity at the classroom level in Los Angeles Unified throughout the school year,” UCLA Clinical and Translational Science Institute Dr. Vladimir Manuel said in the April 28 statement. “Our models suggest no or very small amounts of classroom transmission since January, even after lifting the outdoor and indoor masking mandates.”

Carvalho said that “vaccinations are and remain our greatest tool to fight against COVID-19” and that the district still plans to increase vaccination rates among students.

“For the remainder of the school year, we will further improve our student vaccination rates via accessible school-based clinics, while offering vaccines for all students ages 5 and older,” he said. “Providing ongoing support, especially in communities where students and their families have been hardest hit by illness, and addressing the educational, mental health and economic challenges of the pandemic, is my top priority.”

With the recommended postponement, the LAUSD joins other large school districts in the state—including the Long Beach Unified, the Corona-Norco Unified, and the Capistrano Unified—in aligning with the state’s student COVID-19 vaccine deadline.

The San Diego Unified School District, however, said earlier this month it plans to continue its vaccine mandate for students ages 16 and up, effective as early as July for the district’s summer school program.

The LAUSD Board of Education will vote to finalize this recommendation on May 10.