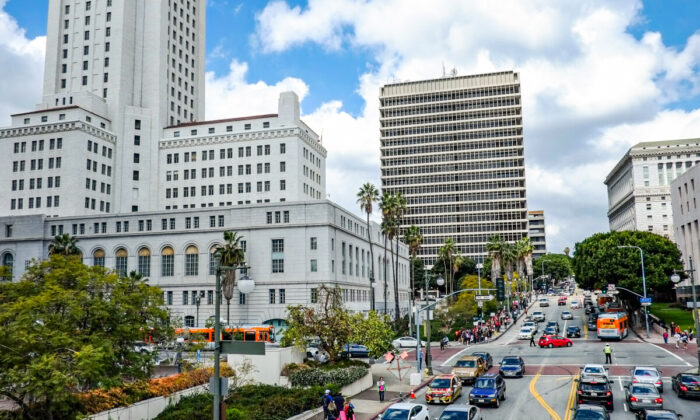 On March 24, candidates for LA County Supervisor District 3—which spans from the Westlake Village to the San Fernando Valley to West Hollywood—participated in a debate hosted by the Los Angeles League of Conservation Voters, an environmental group based in West Hollywood.

On greenhouse gas emissions, Horvath said she thinks supervisors should double down on accomplishing the county’s existing “Our County” Plan, which consists of 12 goals with short, medium, and longterm timelines.

One of those goals, Horvath said, includes reducing greenhouse gas emissions by retrofitting buildings with green energy technology to reduce building energy consumption, though she did not specify what type of buildings she has seen retrofitting policies successfully enacted in her own West Hollywood community.

“I think we can decarbonize our building sector in a way that cuts family budgets down to a size where you’re not spending half your income on fuel,” Stern said. “I think we can do that by retrofitting people’s homes. When your furnace breaks or your AC unit isn’t working, things like heat pumps into your home—that are all electrified—can be a huge benefit.”

Stern went on to say that “new construction in the county should be 100 percent green,” and that his goal is to close the gas and fossil fuel infrastructure in the county, particularly in Aliso Canyon and Playa Del Rey.

“I would put much more resources into the harbor, electrifying those ships offshore,” he said. “You see the same thing with the [pollution from ships] in respect to what’s happening along the freeways, [creating] asthma, all the impacts on people’s lives.”

Hertzberg said increasing the amount of recycled water would help the county make better use of its own water and become less dependent on water imported from the Colorado River and other locations.

Stern agreed that the county needed to find more ways to rely on its own water supply and suggested the county focus on cleaning up its groundwater and creating a new bank underneath Los Angeles that the city can draw on.

Stern also said Angelenos must change their mentality for Los Angeles, with a new vision for a self-reliant Los Angeles when it comes to water.

“[We must] commit ourselves to a new way of thinking about water—that every ounce that you drink from that tap doesn’t necessarily have to be pulled out of the Eastern Sierras,” he said. “We can recycle our water, and we can use it for all kinds of applications in L.A.”

As for Horvath, she again referenced the county’s existing plan for water usage outlined in the “Our County” Plan.

The county’s plan includes a strategy to achieve zero violation of primary maximum contaminant levels in the public drinking water systems by 2045 and a goal for 80 percent of water to be sourced locally by 2045.

“We need to make sure that the water that exists in our county is protected, preserved, and conserved,” she said.

In response to a question about balancing housing expansion, the environmental costs, and wildfire risks, Stern said the solution was to build in the inner parts of the county, not the outer canyons and hills where wildfire risk is high.

Instead, Stern said, the county should incentivize housing development near the center of the county and high-opportunity transit zones to make housing more affordable and environmentally sustainable.

“That’s really where I think the future of housing is going to be an outlet, being very intentional about affordability,” Stern said.

Hertzberg said he would seek a $25 billion bond from various investors to create new housing units.

He said he would also utilize the “adaptive reuse” method to convert old buildings into multiple housing units.

Horvath said she thought the county needs to “focus densification in our urban cores and not in the places where it is dangerous to our natural environment and to the people who would be living there.”

She said people should not have to worry about fire risks and commuting.

“We don’t want people living in high-risk fire areas,” she said. “We want to make sure that people are actually living in community and close to their jobs, close to the services that they need, connected by transportation that gets them to where they need to go each and every day.”

Horvath said West Hollywood created an inclusionary housing policy to set aside at least 20 percent of housing units in each development project to provide affordable housing to people earning moderate, low, or very low income “to make sure that we’re getting the housing that we need the most in our communities.”

Horvath said she would work to implement a similar policy in the county.

The primary county supervisor elections will take place on June 7.

A spokesperson for the Los Angeles League of Conservation Voters, the hosting organization, did not respond to a request for comment by press deadline.