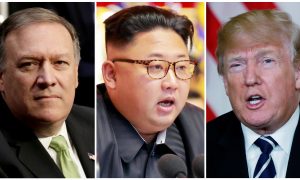 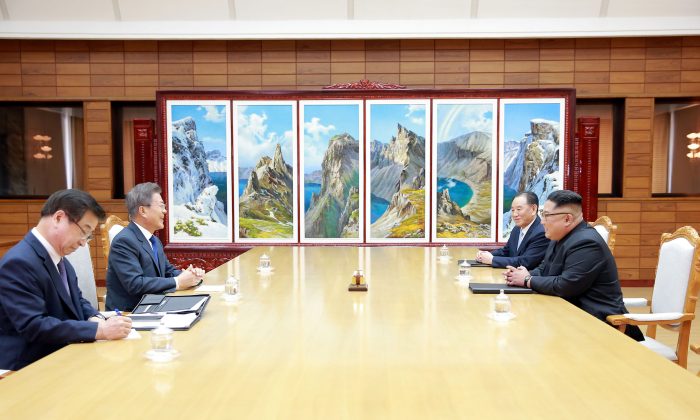 Moon, who returned to Seoul on Thursday morning after meeting Trump in Washington, told a news conference in Seoul that he delivered a message to Kim on Saturday of Trump’s “firm will” to end the hostile relationship with North Korea and pursue bilateral economic cooperation given that North Korea commit complete denuclearization.

“I told Chairman Kim that if he decides and put into practice a complete denuclearization, President Trump is willing for economic cooperation and ending hostile relations,” Moon said.

Moon said that during the impromptu meeting with Kim on Saturday, they both expressed their wish for the North Korea-U.S. summit to be held successfully.

“Chairman Kim and I have agreed that the June 12 summit should be held successfully, and that our quest for the Korean peninsula’s denuclearization and a perpetual peace regime should not be halted,” Moon said.

Moon also said that Kim reaffirmed his commitment to working towards a formal end to the 1950-53 Korean War.

North Korean state-media KCNA said Kim and Moon agreed to hold high-level talks between their two nations on June 1 to take steps to quickly implement their efforts to denuclearize the peninsula.

The meeting was the latest dramatic turn in a week of diplomatic ups and downs surrounding the prospects for an unprecedented summit between the United States and North Korea.

U.S. Secretary of State Mike Pompeo, who met Kim twice in Pyongyang, told a Senate committee on May 24 that North Korea had not been responding to contact attempts in recent days.

“Over the past many days, we have endeavored to do what Chairman Kim and I had agreed to put preparation teams together to begin to work for the summit and we had received no response to our inquiries to them,” Pompeo said.

U.S. officials also said that the North Koreans had not showed up to a planned meeting in Singapore last week.

“We’ve not been able to conduct the preparations between our two teams that would be necessary to have a successful summit,” Pompeo said.

In a letter to Kim on Thursday morning, Trump said he was cancelling the planned Singapore summit but remained open to dialogue. On Friday, Trump revealed that North Korea had sent a “warm and productive” statement and said that the planned June 12 summit may still happen as scheduled.

“Very good news to receive the warm and productive statement from North Korea,” Trump wrote on Twitter. “We will soon see where it will lead, hopefully to long and enduring prosperity and peace. Only time (and talent) will tell!”

Very good news to receive the warm and productive statement from North Korea. We will soon see where it will lead, hopefully to long and enduring prosperity and peace. Only time (and talent) will tell!

Moon was also contacted on Friday by North Korea. Kim expressed hopes to meet for candid dialogue, reported Yonhap, to which Moon agreed.

“A meeting was held because officials of both countries thought that meeting face-to-face would be better than a phone call,” Moon said on Sunday.

The impromptu meeting on Saturday lasted two hours and was the second between the two sides, following the historic meeting on April 27 when the two Koreas said in the Panmunjom declaration that they would work toward a nuclear-free Korean peninsula and a formal end to the 1950-53 Korean War.

Video and a photo released by South Korea’s presidential Blue House on Saturday showed Kim hugging Moon and kissing him on the cheek three times as he saw Moon off after their meeting at Tongilgak, the North’s building in the truce village, which lies in the Demilitarized Zone (DMZ) – the 2.5-mile wide buffer that runs along the heavily armed military border.

Previously, a second inter-Korean summit had been scheduled for May 16, but North Korea abruptly cancelled the planned talks citing provocation from the annual U.S.-South Korean military exercises in the south.

Moon is the only South Korean leader to have met a North Korean leader twice, both times in the DMZ, which is a symbol of the unending hostilities between the nations after the Korean War ended in 1953 in a truce, not a peace treaty.

On Saturday, Trump said that talks in preparation for the June 12 summit in Singapore are now progressing very well.

“We’re doing very well in terms of the summit with North Korea,” Trump said at the White House. “It’s moving along very nicely. So we’re looking at June 12th in Singapore. That hasn’t changed. So, we’ll see what happens.”

A White House team will leave as scheduled for Singapore this weekend to prepare for the possible summit, a White House spokeswoman said on Saturday.

By Hyonhee Shin and Josh Smith. Additional reporting by The Epoch Times staff.