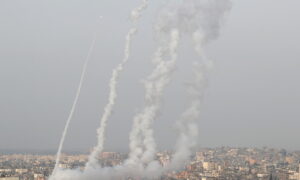 It was the clearest sign yet that the on-again off-again summit between Trump and Kim is likely to be held as initially agreed, in Singapore on June 12.

The unannounced meeting at the Panmunjom border village between Moon and Kim came a month after they held the first inter-Korean summit in more than a decade at the same venue and declared they would work toward a nuclear-free Korean peninsula.

“The two leaders candidly exchanged views about making the North Korea-U.S. summit a successful one and about implementing the Panmunjom Declaration,” South Korea’s presidential spokesman said in a statement. He did not confirm how the secret meeting was arranged or which side asked for it.

Video and one of the photos released by the presidential Blue House on Saturday showed Kim hugging Moon and kissing him on the cheek three times as he saw Moon off after their meeting at Tongilgak, the North’s building in the truce village, which lies in the Demilitarized Zone (DMZ), the 160-mile (260 km) long, 2.5-mile (4 km) wide buffer that runs along the heavily armed military border.

The previous summit was held at the southern side of the border.

Moon, who returned to Seoul earlier this week after a meeting with Trump, will announce details of the meeting with Kim on Sunday morning.

Trump said on Friday, May 25, that Washington was having “productive talks” with Pyongyang about reinstating the June 12 meeting.

Trump said in a Twitter post late on Friday, “We are having very productive talks about reinstating the Summit which, if it does happen, will likely remain in Singapore on the same date, June 12th., and, if necessary, will be extended beyond that date.”

Trump had earlier indicated the summit could be salvaged after welcoming a conciliatory statement from North Korea saying it remained open to talks.

“It was a very nice statement they put out,” Trump told reporters at the White House. “We’ll see what happens—it could even be the 12th.”

“We’re talking to them now. They very much want to do it. We’d like to do it,” he said.

By Hyunjoo Jin and Soyoung Kim