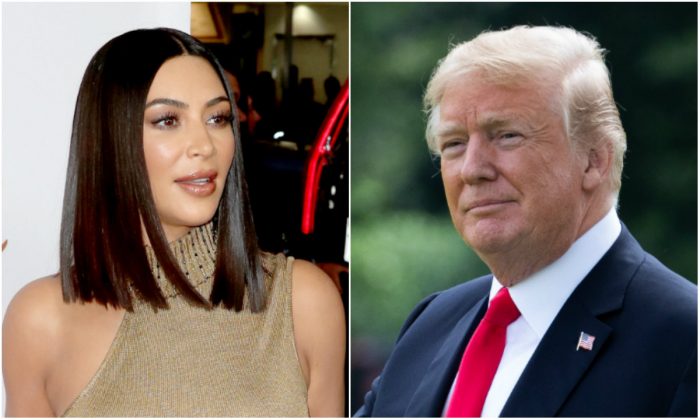 Reality television celebrity Kim Kardashian West met with President Donald Trump in the White House on Wednesday, May 30. She asked Trump to pardon a woman currently serving life in prison for drug conspiracy and money laundering.

“I would like to thank President Trump for his time this afternoon. It is our hope that the President will grant clemency to Ms. Alice Marie Johnson who is serving a life sentence for a first-time, non-violent drug offense,” Kardashian West said on Twitter the day after. “We are optimistic about Ms. Johnson’s future and hopeful that she—and so many like her—will get a second chance at life.”

I would like to thank President Trump for his time this afternoon. It is our hope that the President will grant clemency to Ms. Alice Marie Johnson who is serving a life sentence for a first-time, non-violent drug offense.

We are optimistic about Ms. Johnson’s future and hopeful that she —and so many like her—will get a second chance at life.

Kushner was already working on a prison reform initiative that has recently pushed the bipartisan First Step Act through a laudable 360-59 House vote. The act would provide to all federal inmates programs teaching life skills, morals, and academics, offer drug addiction treatment, prison jobs, mentoring, and more. It would also allow many non-violent offenders with low risk of recidivism to spend the last part of their sentences in alternative detention, like home confinement, halfway houses, and community supervision.

After a few months back and forth with Kushner, the Trump-Kardashian meeting was set up—a chance for her to plea for the release of the 63-year-old.

“I would explain to him that, just like everybody else, we can make choices in our lives that we’re not proud of and that we don’t think through all the way,” Kardashian West said about what she’d like to tell Trump in a recent interview with Mic.

Johnson grew up in Olive Branch, Mississippi, as one of nine children. During her high school years, she got pregnant and married. She had her first child at the age of 15. Still, she finished school with fairly good grades and even spent some time in college. In the early 1980s, she landed a job with FedEx and soon made it into management. By the end of the decade, she already had five children.

But something went wrong.

In 1989, she divorced the father of her children. A year later she lost her job—she was addicted to gambling. In 1991 she filed for bankruptcy and lost her house. She found a factory job, but it didn’t pay enough.

That’s when she made the decision to engage in the drug trade.

She got involved with a group of people that were getting large shipments of cocaine from Houston and distributing them in Memphis. Soon, the money started to roll in. She bought a commercial cleaning company franchise and made a $26,000 downpayment on a house. She didn’t even have to work very hard for the money, based on her account to the American Civil Liberties Union. She just let the traffickers use her phone, stashed money for them, and relayed coded messages.

The enterprise didn’t last long though. In 1993, she was arrested along with 15 others. Ten of the co-conspirators took plea deals and testified against the others, including Johnson. She was convicted of conspiracy to possess with intent to distribute cocaine, attempted possession of cocaine with intent to distribute and deliver, money laundering, conspiracy to commit money laundering, and structuring a monetary transaction. She was sentenced to life in prison without parole plus 25 years in 1997.

Johnson was at the top of the list of recommendations to President Barack Obama’s Clemency Project 2014 by CAN-DO, a nonprofit advocating clemency for non-violent drug offenders. Johnson has expressed remorse for her crimes, participated in vocational training and volunteer programs, and exhibited exemplary conduct. She’s also authored and produced multiple plays. Upon release, she’d like to help ex-convicts find jobs to reduce recidivism, according to her profile on the CAN-DO website.

Obama, however, denied her pardon without explanation.

Kardashian West was hoping to secure the pardon from Trump, who recently called America: “a nation that believes in the power of redemption” in support of Kushner’s prison reform. Trump also recently issued a rare posthumous pardon to legendary boxer Jack Johnson.

Johnson’s early 20th-century career was destroyed after he was prosecuted and imprisoned on racially motivated charges.

Boxers, historians, academics, and politicians have pushed for a pardon for Johnson for 14 years. Presidents George W. Bush and Barack Obama never acted on the requests. Trump revealed in April that he is considering a full pardon after speaking about it with actor Sylvester Stallone.