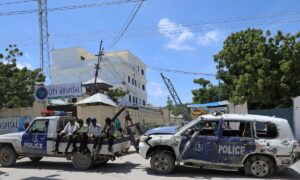 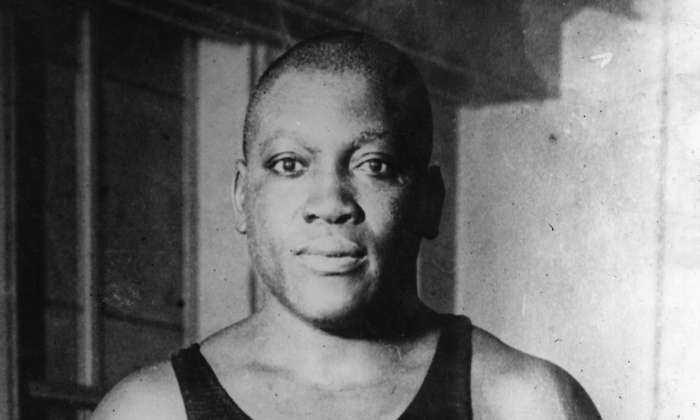 Jack Johnson (1878 - 1946) of the USA, one of the greatest heavyweight boxers of all time. In 1908 he took the world title from Tommy Burns and held on to it until Jess Willard beat him in 1915. (Hulton Archive/Getty Images)
Trump Administration

Johnson’s career was destroyed after he was prosecuted and imprisoned on racially motivated charges.

“I am taking this very righteous step, I believe, to correct a wrong that occurred in our history, and to honor a truly legendary boxing champion, legendary athlete, and a person that, when people got to know him, they really liked him and they really thought he was treated unfairly as a human being and unfairly as a champion,” Trump said.

Boxers, historians, academics, and politicians have pushed for a pardon for Johnson for 14 years. Presidents George W. Bush and Barack Obama never acted on the requests. Trump revealed in April that he is considering a full pardon after speaking with Stallone.

“Congress has supported numerous resolutions calling for Johnson’s pardon. Went through Congress numerous times. No President ever signed it, surprisingly,” Trump said. “They thought it was going to be signed in the last administration and that didn’t happen. So that was very disappointing for a lot of people.”

“Sylvester Stallone called me with the story of heavyweight boxing champion Jack Johnson. His trials and tribulations were great, his life complex and controversial,” Trump wrote on Twitter in April. “Others have looked at this over the years, most thought it would be done, but yes, I am considering a Full Pardon!”

Johnson was born into a family of former slaves and worked his way up to become one of the greatest heavyweight boxers in history.

“He overcame these difficult circumstances to reach the heights of boxing in the boxing world, and inspired generations with his tenacity and a very independent spirit,” Trump said.

The authorities first tried to target Lucille Cameron, who did not cooperate. Cameron later became Johnson’s wife. The authorities then found another white witness, Belle Schreiber, to testify against Johnson. After his conviction, Johnson fled the country. Years later, he agreed to come back to serve a 10-month sentence.