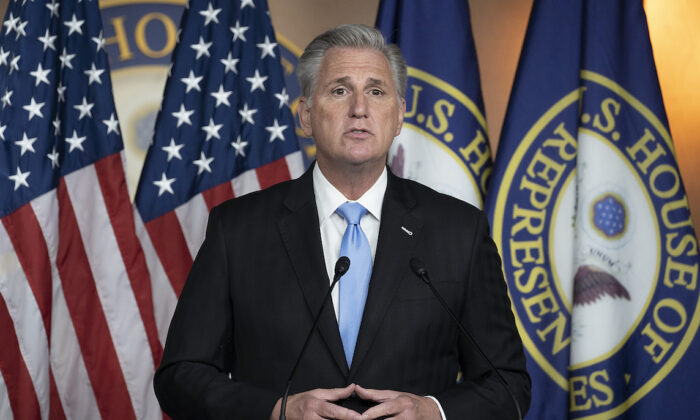 Kevin McCarthy Says 2020 Election Results Are a ‘Mandate Against Socialism’

“This election cycle has made one thing clear: The Republican Party is now the party of the American worker,” McCarthy told reporters on Nov. 12.

Republicans made gains in the House, netting five seats so far, with 22 races still not called. A recent race call in Alaska gave Republicans their 50th Senate seat, so the GOP needs to win just one of two Georgia runoff races to hold their majority.

House Speaker Nancy Pelosi (D-Calif.), last week commented on the Democrats’ relatively weak showing in House races, saying, “We did not win every battle in the House, but we did win the war.” She also said Democratic nominee Joe Biden “has a strong mandate to lead, and he’ll have a strong Democratic House with him and many Democrats in the Senate.”

In a follow-up interview with Fox News, McCarthy further clarified this perspective, saying, “Voters were given a clear choice between socialism and freedom. They chose freedom.”

In the press conference, McCarthy also questioned whether Biden would be declared the eventual winner of the presidential race, citing the need to count every vote.

“Every recount needs to be finished,” McCarthy said, responding to a question from a reporter who cited Democrat leaders claiming that the Trump team’s election-related lawsuits are “jeopardizing the democracy of America.”

“Not at all,” McCarthy responded. “You’ve got a hand recount going on in Georgia. Every recount needs to be finished. You’ve got challenges inside courts. Every challenge needs to be heard.”

“When you have more than 150 million Americans voting, let’s make sure we get this right,” McCarthy said.

The Epoch Times has not yet called a winner in the 2020 presidential race and will wait until the legal challenges are settled, vote-counting is finished, and the Electoral College votes.

A number of mainstream news outlets on Nov. 7 called the race for Biden, who later claimed victory in a speech.

Biden’s claim to the title of “president-elect” prompted pushback from Trump, who in a statement claimed that some media outlets are seeking to downplay claims of election irregularities in order to prematurely cement a Biden victory.

“The American people are entitled to an honest election: That means counting all legal ballots, and not counting any illegal ballots. This is the only way to ensure the public has full confidence in our election,” Trump added.