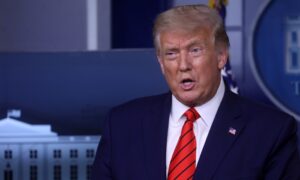 Trump to Visit Kenosha to Survey Damage From Riots, Speak to Business Owners
0 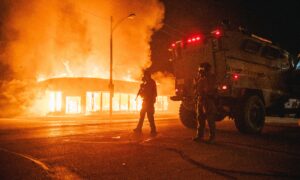 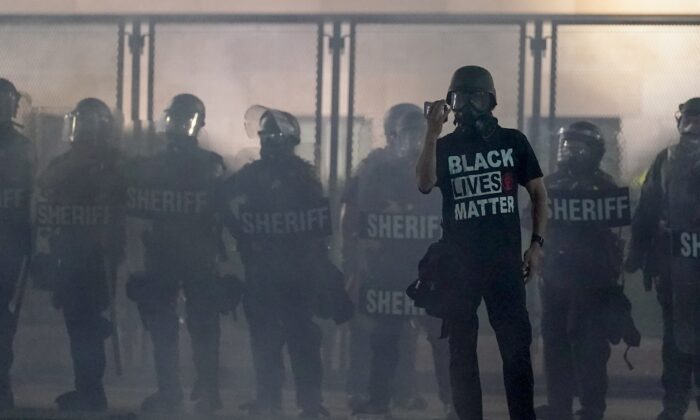 A protester holds up a phone as he stands in front of law enforcement officers in Kenosha, Wis., on Aug. 25, 2020. (Morry Gash/AP Photo)
US News

Documents filed in the U.S. District Court for the Eastern District of Wisconsin on Aug. 28 as part of a class action lawsuit against the City of Kenosha and Kenosha County show that the plaintiffs allege violations of the First Amendment and Equal Protection rights.

The equal protection rights claim refers to the Equal Protection Clause of the 14th Amendment of the U.S. Constitution, which states that no state shall “deny to any person within its jurisdiction the equal protection of the laws.” The clause essentially mandates that states must apply the law impartially, not based on arbitrary distinctions between citizens. The plaintiffs claim this is not the case in the law enforcement response in Kenosha, which saw an outbreak of violence amid largely peaceful protests in the wake of the Aug. 23 shooting of Jacob Blake, a suspect in a felony sexual assault who was shot while resisting arrest.

“In Kenosha, there are two sets of laws—one that applies to those who protest police brutality and racism, and another for those who support the police,” the complaint states, referring to pro-police demonstrators and armed citizen patrols that have sprung up in response to destructive riots, which they refer to as “militias.”

“Over the past 9 days, the Kenosha City Police Department and the Kenosha County Sheriff’s Department have arrested over 150 peaceful protesters for violating the County imposed curfew order, yet in spite of the presence of pro-police protesters and militias, NOT A SINGLE PRO-POLICE demonstrator has been arrested,” the suit contends, adding that authorities have used the curfew “to silence the voices of those who peacefully demonstrate against police brutality while allowing pro-police activists and militias to roam the streets without fear of arrest.”

“Plaintiffs bring this action to protect their right and the rights of others to protest police brutality free of retaliation and free from fear that they will be arrested solely on the basis of the content of their message,” the complaint adds.

The four plaintiffs said they were arrested while protesting in Kenosha, adding that they believe that as they plan to continue protesting, they will be either arrested in the future or “will be chilled from participating in such protests for fear of arrest.”

The lawsuit, which seeks unspecified monetary damages and calls for a jury trial, was filed on the same day that President Donald Trump visited Kenosha to express his support for law enforcement efforts and to members of the business community, who have seen their establishments damaged or destroyed due to riots.

Kenosha city officials said in recent estimates that the devastation of city-owned property alone has caused nearly $2 million in damage.

While the plaintiffs acknowledged that “some demonstrators have engaged in destructive activity, these incidents have been remote when compared to the hundreds of otherwise peaceful protesters.”

Kenosha’s streets exploded in violence in the wake of Blake’s shooting, though by Aug. 26, things had largely calmed down.

“Since Wednesday, the entire atmosphere of Kenosha has changed dramatically as far as the people who live here. And I think the crowds last night were small. There was a few hundred people and they walked peacefully through Kenosha and they did exactly what they wanted to do as far as the protest to make people know their concerns, but they did it without violence,” Kenosha County Sheriff David Beth told reporters at an Aug. 27 briefing.