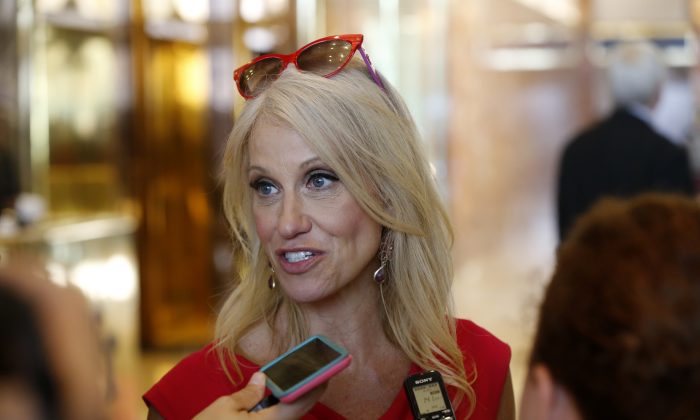 Kellyanne Conway in the lobby of Trump Tower in New York, on Aug. 17, 2016. (AP Photo/Gerald Herbert)
Crime and Incidents

White House counselor Kellyanne Conway says she was grabbed and shaken by a woman in a Maryland restaurant where she was dining with her daughter late last year.

In an interview with CNN aired on Feb. 8, Conway said she was at Uncle Julio’s, a Mexican restaurant Bethesda, Maryland, with her middle school-aged daughter and her friends in October last year when someone grabbed her from behind.

First on CNN: Kellyanne Conway describes alleged assault by “out of control” woman at a restaurant in October. The woman denies the charge. https://t.co/lv6pUIg8UU pic.twitter.com/oHVb1IsucZ

“I was standing next to my daughter and many of her friends at dinner and she was right here, right next to me. And her friends were too. And somebody was grabbing me from behind, grabbing my arms, and was shaking me to the point where I felt maybe somebody was hugging me,” Conway told CNN’s Dana Bash.

The president’s counselor described the woman as “unhinged” and “out of control.”

“I don’t even know how to explain her to you. She was just, her whole face was terror and anger,” Conway said when describing her assailant. “She was right here, and my daughter was right there.”

Conway said she eventually called 911 but the woman had left by the time police arrived.

The woman was identified as Mary Elizabeth Inabinett, reported CNN. The 63-year-old Maryland resident was subsequently charged in November with second-degree assault and disorderly conduct. Inabinett’s trial date is set for March in a Maryland state court.

Conway said Inabinett should face consequences for her actions.

According to a police report, Inabinett allegedly shook Conway for a few seconds then “continued to yell and gesture at her for approximately 8-10 minutes before she was escorted from the restaurant,” reported the network.

Lawyer William Alden McDaniel Jr., who represents Inabinett, denied the assault to CNN and said his client was exercising “her First Amendment right to express her personal opinions.”

Conway said she was reluctant to talk about the incident publicly as it happened in front of her daughter, but she added that it was necessary for people to understand that they needed “to control [their] temper, control [themselves].”

Harassment isn’t new to members of the Trump administration. Since President Donald Trump was elected, his staff, family, allies, and supporters have all been subject to similar public abuse.

Last year, White House press secretary Sarah Huckabee Sanders was asked to leave a Virginia restaurant by the owners because she worked for the president.

Similarly, Secretary of Homeland Security (DHS) Kirstjen Nielsen was confronted by protesters at a Washington restaurant, according to Tyler Houlton, DHS press secretary.

“While having a work dinner tonight, the Secretary and her staff heard from a small group of protestors who share her concern with our current immigration laws that have created a crisis on our southern border,” Houlton wrote on Twitter last June.

While having a work dinner tonight, the Secretary and her staff heard from a small group of protestors who share her concern with our current immigration laws that have created a crisis on our southern border.