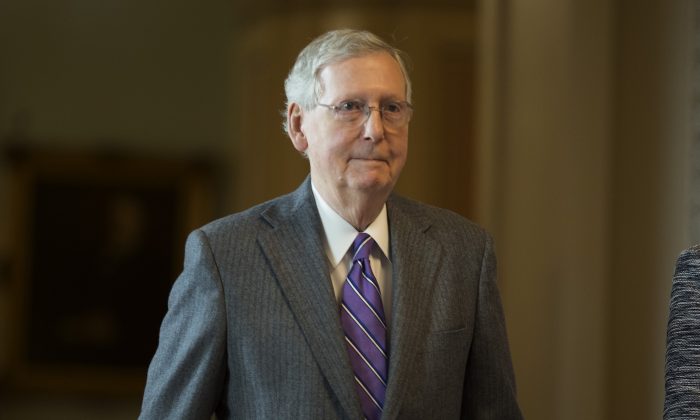 Senate Majority Leader Mitch McConnell (R-KY) walks to his office at the U.S. Capitol in Washington on Feb. 15, 2018. The Senate is set to vote on an immigration bill despite the threat of a veto from the White House. (Photo by Aaron P. Bernstein/Getty Images)
Trump Administration

Senate Majority Leader Mitch McConnell (R-Ky.) was confronted and verbally harassed by a small group of protesters as he was leaving a restaurant on July 7 in Louisville, Kentucky.

Recorded footage shows the group shouting “Vote you out” and “Abolish ICE” as they followed McConnell to his car.

One protester can be heard yelling out an apparent threat: “We know where you live, Mitch!”

In the footage, McConnell appears to be unruffled as he makes the short walk to his vehicle. He didn’t say anything to the group of protesters.

It’s the second time the senator has been accosted in public over the Trump administration’s enforcement of existing immigration policies. Around 2,000 children were separated from adults who brought them over the border in the six weeks from April 19 to May 31, after President Donald Trump ordered the strict enforcement of existing laws to apprehend those who enter the country illegally. Trump then signed an executive order on June 20 to help stop the separation of illegal immigrant families.

Last month, McConnell was accosted by protesters as he left a dinner at Georgetown University. During the incident, his wife, Transportation Secretary Elaine Chao, stepped in, telling them, “Why don’t you leave my husband alone?”

McConnell did not immediately respond to a request for comment.

The violent rhetoric against Trump administration officials has been emboldened by comments made by Rep. Maxine Waters (D-Calif.) on June 25 inciting people to “create a crowd” to “push back” against the officials as they go about their daily lives. Since the president was elected, his staff, family, allies, and supporters have all been subjected to similar harassment.

In the past month, multiple members of the Trump administration have been heckled at restaurants in separate incidents, including White House press secretary Sarah Huckabee Sanders, Secretary of Homeland Security Kirstjen Nielsen, and White House adviser Stephen Miller.

“After threatening to kill the campaign worker and other supporters, Astrof backed his car up in an aggressive manner nearly striking the worker,” the police said.