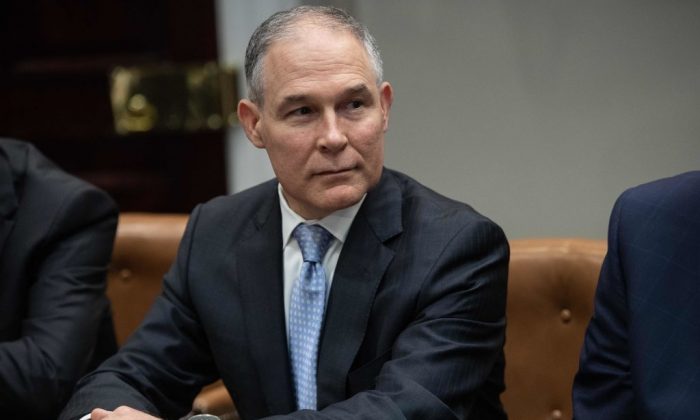 Environmental Protection Agency (EPA) Administrator Scott Pruitt attends a meeting between US President Donald Trump and carmakers in the Roosevelt Room at the White House in Washington, DC, on May 11, 2018. (Nicholas Kamm/AFP/Getty Images)
By Bowen Xiao

Scott Pruitt, the head of the Environmental Protection Agency (EPA), is the latest Trump administration official to be harassed while grabbing a bite at a restaurant, as recorded in a video posted on Facebook on July 2.

Pruitt was confronted inside a restaurant in Washington by teacher Kirstin Mink, who walked up to and heckled him, saying he should resign from his post. Video footage of the encounter, reportedly filmed by her husband, was later posted on social media.

“I just wanted to urge you to resign, because of what you’re doing to the environment in our country,” Mink said, while holding her 2-year-old son.

The footage shows Pruitt quietly listening to Mink’s statements before the video cuts out. Mink told The New York Post that Pruitt gave no response and left the restaurant before she returned to her seat. A spokesman for Pruitt said that he thanked Mink and left because he was finished eating.

In the past month, several members of the Trump administration have been heckled in restaurants. White House press secretary Sarah Huckabee Sanders, Secretary of Homeland Security Kirstjen Nielsen, and White House adviser Stephen Miller were harassed, in separate incidents. Sanders was directly asked to leave by the owner of The Red Hen in Lexington, Virginia.

“I was asked to leave because I work for President Trump,” Sanders said of the incident, in a White House press briefing on June 25. “We’re allowed to disagree, but we should be allowed to do so freely and without fear of harm, and this goes for all people regardless of politics.”

The current violent rhetoric against the administration stems from heated comments made by Rep. Maxine Waters (D-Calif.), who on June 25 incited supporters to “create a crowd” to “push back” against members of the Trump administration. Since the president was elected, his staff, family, allies, and supporters have all been subjected to similar provocation and badgering. Waters pushed that trend to a new level by openly calling on her supporters to confront Trump’s team in public.