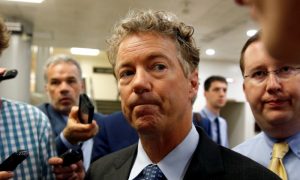 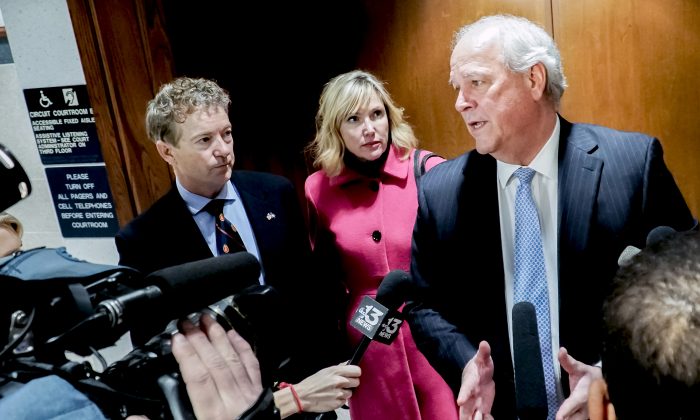 Tom Kerrick, right, attorney for U.S. Sen. Rand Paul, left, speaks to reporters on Jan. 30, 2019, next to Paul's wife Kelley during the final day of the civil trial involving Paul and his neighbor Rene Boucher in Warren Circuit Court in Bowling Green, Ky. (Bac Totrong/Daily News via AP)
US News

A jury awarded Sen. Rand Paul (R-Ky.) over $580,000 in damages for being the victim of a vicious attack by his neighbor.

Paul’s lawsuit asked for up to $1.5 million in damages.

“Kelley and I are glad, obviously, to have this behind us,” Paul said outside the courtroom in Bowling Green, reported WDRB. “It’s been a tough year, and we’re kind of glad to get this over.”

Paul was attacked in 2017 by neighbor Rene Boucher. Paul suffered six broken ribs and had to undergo hernia surgery. Boucher pleaded guilty and was sentenced to 30 days in federal prison.

Boucher has claimed that the attack stemmed from his rage over Paul not clearing piles of brush on his property and said that on the day of the attack, Paul used a lawnmower that blew leaves over the line separating their properties.

Paul said that he and Boucher had never spoken about the yard waste.

“There was no ‘longstanding dispute.’ This description is untrue,” a spokesman for Paul told Fox News previously. “It is impossible to have a dispute when no words of disagreement were ever spoken—neither immediately nor at any other time before the attack occurred.”

“I bend over to pick up a stick, and just as I’m straightening up, something hits me so hard,” Paul said, reported WDRB. “I really thought if I got another blow to my back, I wasn’t going to survive. And so really I thought I could die at that point.”

Boucher called the attack “an irrational thing,” adding, “What I did was wrong.”

Judge Tyler Gill had told jurors that they knew Boucher was guilty because of his plea so their job was to determine the damages that Paul should be awarded.

Paul wrote on Twitter about the award: “This lawsuit wasn’t about me. It was about all of us and what we find acceptable as a society. We need to send a clear message that violence is not the answer – anytime, anywhere. We can hold different views, whether it’s politics, religion or day to day matters.”

“It’s never ok to turn those disagreements into violent, aggressive anger. I hope that’s the message from today,” he added.

This lawsuit wasn’t about me. It was about all of us and what we find acceptable as a society. We need to send a clear message that violence is not the answer – anytime, anywhere.

We can hold different views, whether it’s politics, religion or day to day matters.

Boucher’s attorney had tried to argue against any damages being awarded, saying that Boucher had served time in jail and underwent community service.

After the sentencing in June, attorney Matthew Baker said that Boucher was also a victim.

“I think this is a real example of how a momentary lapse in judgement, just 20 to 30 seconds of poor decision making can have such a profound impact, not only on Senator Paul, but also Dr. Boucher,” Baker said, reported WBKO.

Paul said in a statement after Boucher was sentenced that “no one deserves to be violently assaulted.”

He added, “A felony conviction with jail time is appropriate and hopefully will deter the attacker from further violence. I commend the FBI and Department of Justice for treating this violent, pre-meditated assault with the seriousness it deserves.”