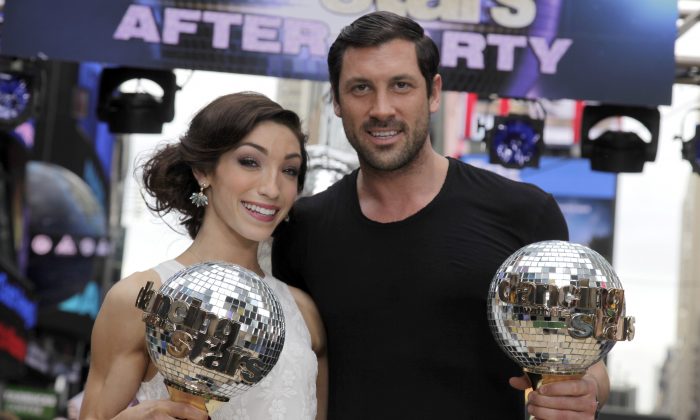 Olympic athlete Meryl Davis and dancer Maksim Chmerkovskiy, winners of "Dancing with the Stars" , appear on ABC's Good Morning America on Wednesday, May 21, 2014, in New York. (Andy Kropa/Invision/AP)
US

Maksim Chmerkovskiy was widely believed to be in line to be a judge on the upcoming Dancing With the Stars season 19, but the spot he would have occupied may have been taken by Julianne Hough.

Hough left the show years ago to pursue acting but hasn’t scored any success in that effort.

Sources connected to the ABC show told TMZ that the network made an officer to Hough to become the fourth judge (the other three are coming back).

The two sides are in negotiations and expected to strike a deal soon.

Unlike dancing on the show, judging doesn’t take a huge time commitment–as little as a couple hours a week.

If Hough does become the fourth judge, it would seem to take away any opportunity for Maks–who won last season with partner Meryl Davis, but has said he doesn’t want to dance in the show anymore.

TMZ said that Maks wanted the judging gig “BADLY” and “he’s really pissed he didn’t get it and has made it known to producers.”

Hough notably guest-judged on an episode in season 18 where the typical partners were switched, meaning Maks was dancing with Danica McKellar instead of Meryl.

“I felt like it was a little bit like, this week could get past so that you could be back with Meryl [Davis] , and you just had to phone it in,” Hough told Maks during the episode.

“I felt like this was lolly-gagging,” Hough added after the episode “I was like, ‘That’s not fair for Danica.’ I wanted to see more of her dancing, I mean, that was where I came from. It was not to be malicious at all.”