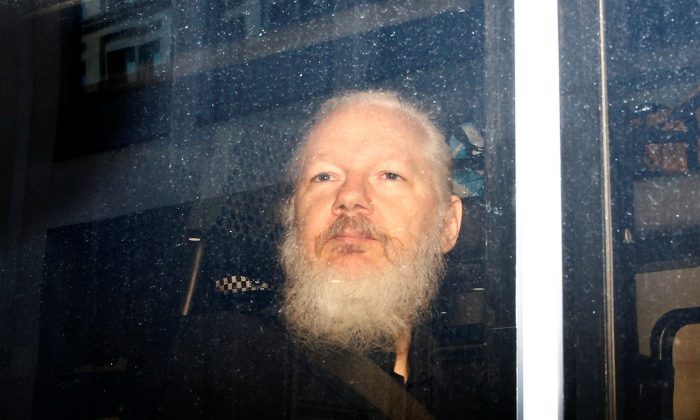 WikiLeaks founder Julian Assange is seen in a police van, after he was arrested by British police, in London, Britain April 11, 2019. (Henry Nicholls/Reuters)
UK

Assange Appears in British Court to Fight US Extradition Bid

LONDON—Julian Assange appeared before a British court Feb. 24 to fight an extradition request from the United States which wants to put the 48-year-old on trial for hacking government computers and violating an espionage law.

A hero to admirers who say he has exposed abuses of power, Assange is cast by critics as a dangerous enemy of the state who has undermined Western security. He says the extradition is politically motivated by those embarrassed by his revelations.

Almost a decade since his WikiLeaks website enraged Washington by leaking secret U.S. documents, Assange is wanted by the United States on 18 criminal counts of conspiring to hack government computers and violating an espionage law and could spend decades in prison if convicted.

Now, some 10 months after he was dragged from the Ecuadorean Embassy where he had been holed up for seven years, Judge Vanessa Baraitser will hear arguments as to why he should or shouldn’t be sent to the United States.

Wearing a blue-grey suit and cleanly shaven, Assange confirmed his name and age. Baraitser told the court that any disturbances would see people removed from the building.

Jennifer Robinson, Assange’s lawyer, says his case could lead to criminalizing activities crucial to investigative journalists and his work has shed an unprecedented light on how the United States conducted its wars in Iraq and Afghanistan.

“We are talking about collateral murder, evidence of war crimes,” she said. “They are a remarkable resource for those of us seeking to hold governments to account for abuses.”

Assange made international headlines in 2010 when WikiLeaks published a classified U.S. military video showing a 2007 attack by Apache helicopters in Baghdad that killed a dozen people, including two Reuters news staff.

The hearing at London’s Woolwich Crown Court won’t decide if Assange is guilty of any wrongdoing, but whether the extradition request meets the requirements set out under a 2003 UK–U.S. treaty, which critics say is stacked in favor of the United States.

Baraitser has agreed that the case will get underway before being postponed until May 18, when it will resume again for a further three weeks to allow both sides more time to gather evidence.

Assange’s lawyers have said in preliminary hearings that they would argue he was being sought for political offenses and that the treaty banned extradition on those grounds.

Other arguments would feature medical evidence, public denunciations by leading U.S. political figures and details from the case of Chelsea Manning, an ex-intelligence analyst who was convicted by a U.S. Army court-martial in 2013 of espionage and other offenses for leaking secret cables to WikiLeaks.

In 2012, Assange took refuge in Ecuador’s UK Embassy to avoid extradition to Sweden where he was accused of sex crimes, which he denied and which were later dropped, saying he feared he would ultimately be sent on to the United States.

After seven years, he was dragged from the embassy in 2019 and then jailed for 50 weeks for skipping bail. He has remained in prison ever since, after the United States launched its extradition request.

If the judge decides Assange should be extradited, the decision needs to be approved by Home Secretary (interior minister) Priti Patel. He would also have the right to appeal to London’s High Court and then possibly to the Supreme Court, Britain’s top judicial body.