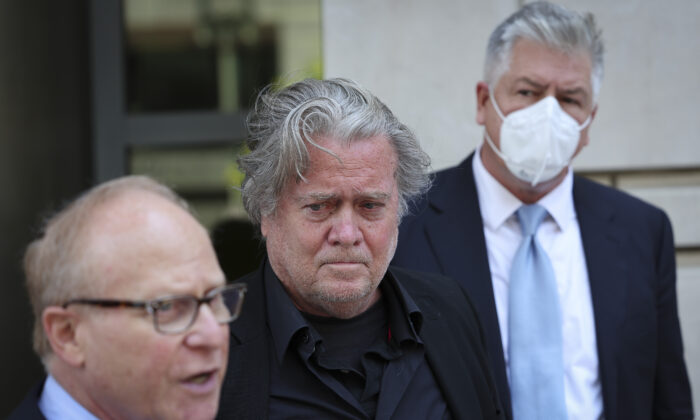 A federal judge on July 11 declined Steve Bannon’s request to delay his contempt of Congress trial, dismissing the former Trump adviser’s reasoning that publicity around the closely-watched trial would make it difficult for a jury to be impartial.

“I see no reason for extending this case any longer,” said U.S. District Judge Carl Nichols, after an hours-long hearing in federal court. He would reconsider granting a delay only if it proves impossible to select an unbiased jury, he said.

The Trump-appointed judge at the hearing dealt Bannon a series of setbacks as the latter prepares to face the July 18 trial, for criminal contempt charges for defying a House Jan. 6 Committee subpoena last fall.

Bannon was barred by Nichols from asserting multiple defenses, including his request to raise executive privilege and to subpoena House Speaker Nancy Pelosi (D-Calif.) and several other members of the Jan. 6 panel.

Bannon’s lawyers would also not be able to argue that the House committee violated rules in summoning Bannon to the stand. Instead, the Bannon team’s defenses are limited mainly to whether Bannon understood or was able to meet the deadlines for the House committee demands.

Nichols’ rulings left one of Bannon’s attorneys to question whether the 68-year-old could defend himself at all.

“What’s the point of going to trial here if there are no defenses?” David Schoen, a lawyer representing Bannon, asked in frustration as he sought clarification from Nichols.

To which Nichols answered: “Agreed.”

Bannon didn’t appear at the court hearing. Speaking to reporters later outside the courthouse, Schoen indicated that they would appeal.

“He’s the judge,” he said of Nichols. “That’s why they have a court of appeals.”

Nichols’ ruling came one day after Bannon agreed to testify in public before the Jan. 6 Committee after receiving a letter from former President Donald Trump waiving executive privilege over Bannon’s testimony.

“While Mr. Bannon has been steadfast in his convictions, circumstances have now changed,” Bannon’s lawyer Robert Costello wrote in a July 9 letter to the House Committee. “Mr. Bannon is willing to, and indeed prefers, to testify at your public hearing.”

The Justice Department is seeking to prevent the jury from learning about Bannon’s “last ditch” effort to testify before the House Jan. 6 Committee in the leadup to his trial.

In a court filing filed with the federal district court in Washington, submitted just past midnight on July 11, the prosecutors argued that Bannon’s sudden reversal of course “almost nine months after his default” is “irrelevant” to the trial.

Bannon’s “eleventh-hour efforts do nothing to begin to cure his failure to produce records,” the prosecutors in the filing said.

“The Defendant’s timing suggests that the only thing that has really changed since he refused to comply with the subpoena in October 2021 is that he is finally about to face the consequences of his decision to default,” wrote Vangn. She argued that Bannon’s “sudden wish to testify is not a genuine effort to meet his obligations but a last-ditch attempt to avoid accountability.”

The Epoch Times has reached out to Costello for comments about the Justice Department filing.