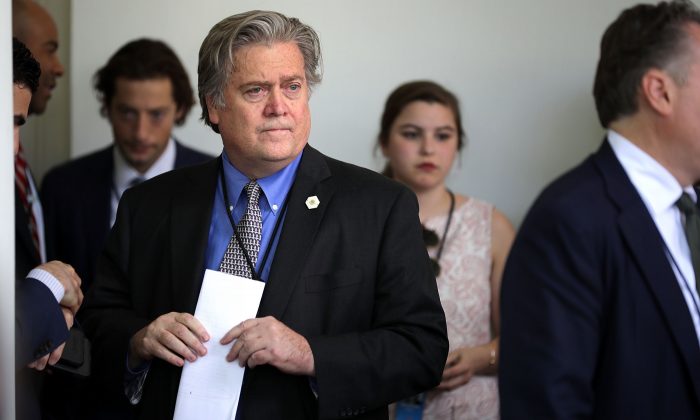 Former Trump adviser Steve Bannon has asked a federal judge to delay his trial over contempt of Congress charges by three months due to the Jan. 6 House select committee’s hearings garnering too much publicity, making it unlikely that a jury would be impartial.

Bannon was indicted in November 2021 by a federal grand jury on two counts of contempt of Congress stemming from his failure to comply with a subpoena issued by the House Select Committee investigating the Jan. 6, 2021, breach of the U.S. Capitol.

The former adviser had refused the subpoena, asserting a right to executive privilege as a former White House staff member.

After failing to hand over the requested documents and make an appearance before the House committee, lawmakers referred Bannon to the Department of Justice (DOJ) which decided to pursue a criminal case against him.

Bannon’s trial was set to start on July 18 but his lawyers, in a motion filed in a U.S. District Court for the District of Columbia on June 29, asked that the trial be delayed until October.

“When trial was scheduled, neither the Court nor the parties were aware of the June and upcoming July media blitz by Select Committee to Investigate the January 6th Attack on the United States Capitol,” the motion states, noting that the Committee had “hired a television executive to produce maximum public impact.”

James Goldston, the former president of ABC News, is helping the committee with its televised hearings, a move that has been criticized by a group of House Republicans.

“Public impact is not limited to the hearings themselves, but to the media coverage that magnified the hearings. In Washington, DC, where trial will take place—and where the acts alleged in the Indictment took place—every major media outlet treated the hearings as a top news story,” the attorneys continued, adding that “every person accused of a crime is guaranteed a fair trial under the U.S. Constitution.”

Bannon’s attorneys also pointed to the fact that the DOJ had recently agreed to delay the trial of five leaders of the Proud Boys after they argued they would be unlikely to receive a fair trial due to the media attention surrounding their case.

The motion goes on to state that Select Committee members have “made inflammatory remarks about the culpability of President Trump and his closest advisers, including Mr. Bannon, and have broadcast to millions of people their purported ‘findings’ on issues that may prejudice the minds of jurors in this case.”

“Those broadcasts have been repackaged and re-broadcast in countless forms, creating a saturation of the information sources available to Washington, D.C. residents. Under the circumstances, a continuance is warranted—to allow the effects of the Select Committee hearing coverage a chance to subside,” it adds.

Bannon’s attorneys added that the July 18 trial date was an “aggressive schedule given the complex legal issues involved” and should thus be delayed.

Bannon’s motion to delay the trial comes after former White House aide Cassidy Hutchinson delivered testimony to the Jan. 6 Committee in a last-minute hearing on June 28.

Hutchinson, who served as an aide to White House chief of staff Mark Meadows, claimed that the White House was aware of the fact that “things might get real, real bad” on Jan. 6, 2021.

Meadows himself has refused to cooperate with the House Committee’s subpoenas. In June, the DOJ announced that Meadows wouldn’t face charges.