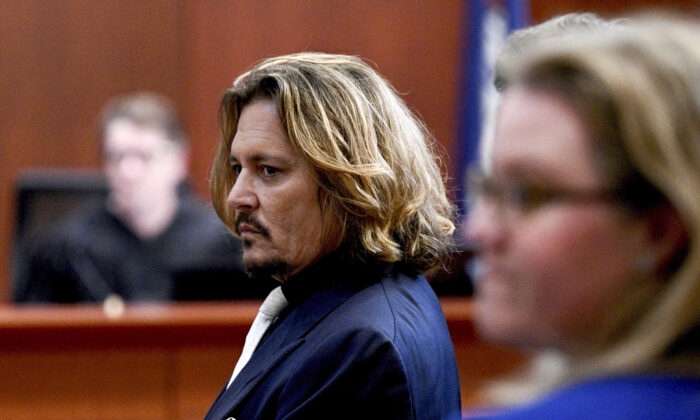 Actor Johnny Depp appears in the courtroom at the Fairfax County Circuit Court in Fairfax, Va., on April 12, 2022. (Brendan Smialowski, Pool via AP)
Crime and Incidents

A piece of actor Johnny Depp’s finger was found in his kitchen after he was involved in a fight with his ex-wife Amber Heard in Australia, his doctor testified in a Virginia court on Monday.

Depp’s addiction doctor, David Kipper, said via a videotaped deposition that the couple’s chef found a piece of his finger in March 2015. It occurred in Australia as Depp was filming “Pirates of the Caribbean: Dead Men Tell No Tales.”

The doctor’s testimony was part of Depp’s civil case against Heard, who he is accusing of defaming him in a Washington Post opinion article. He’s seeking $50 million in damages, while Heard has counter-sued for $100 million.

Kipper told attorneys that “I cleaned his wound” before he took Depp to the hospital. When he went back to their Australia rental home, the doctor said he found a piece of the actor’s finger on the kitchen floor, adding there was broken glass in the kitchen and “blood around the home.”

The doctor had been treating Depp for addiction to alcohol, cocaine, and various prescription medication.

Earlier in the trial, Depp’s lawyers claimed the finger was sliced when Heard threw a bottle at him. But Kipper told the court that Depp told hospital workers he cut himself with a knife, according to TheWrap.

When he saw Heard—who he was also treating—that same day in 2015, Kipper said he did not see any signs of abuse or any bruising.

Depp in April 2015 told Kipper via text messages that he’d “cut the top of my middle finger off. What should I do? Go to the hospital? I’m so embarrassed for jumping into anything with her,” according to reports.

And later that year, in June, Depp sent Kipper a message that said: “My deformed finger and I have no friends!!! By the way…Amber and I have been absolutely perfect for three [expletive] months solid!!! I have locked my monster child away in a cage within and it has [expletive] worked!!! We’re [expletive] best friends now,” according to Deadline.

Depp denies abusing Heard, but Heard’s lawyers say evidence will prove that he did. The actor’s denials, they argue, lack credibility because he frequently drank and used drugs to the point of blacking out and failing to remember anything he did.

On April 14, a former personal assistant to Heard said she never saw the actress suffer any physical abuse at the hands of Depp—but she said Heard once spit in her face when she asked for a higher salary.

Heard allegedly descended into screaming fits of blind rage, sent incoherent text messages at 4 a.m., and was often drunk and high on illegal drugs, Kate James testified in a video deposition that was played in court.

Depp, on the other hand, was very calm, almost shy, “like a total Southern gentleman,” James said.

Both Depp and Heard are expected to testify at the trial in Fairfax County Circuit Court, scheduled for six weeks, along with actors Paul Bettany and James Franco, and billionaire Elon Musk.