The White House announced the rules on Nov. 19, after restoring Acosta’s hard pass. A judge ruled the White House had to restore the pass as a court case filed by CNN made its way through court.

“We have created these rules with a degree of regret. For years, members of the White House press corps have attended countless press events with the president and other officials without engaging in the behavior Mr. Acosta displayed,” Press Secretary Sarah Sanders said at the time.

Following his unruly behavior on Nov. 7, Acosta refused to abide by the new rules, asking three questions of Sanders and continuing to take stances that relied on unconfirmed reports.

Sanders called on Acosta after he declined to ask a question regarding either National Economic Council Director Larry Kudlow or National Security Adviser John Bolton. He asked her if President Donald Trump would recommend that Paul Manafort, a former adviser to the president, should cooperate with Special Counsel Robert Mueller moving forward.

Mueller’s team claimed this week Manafort violated his plea agreement. Mueller’s investigation has remained troubled, with conflicts of interest, and has produced no evidence linking Trump or his team to alleged Russian interference in the 2016 presidential election.

Sanders said she could only speak about Trump’s cooperation with Mueller and said: “There was no collusion and we’re ready for this to wrap up.”

Acosta then interjected his opinion, claiming Trump doesn’t believe advisers on various issues. “That’s not accurate. That’s not true,” Sanders said. “The president has a great deal of faith in the intelligence community,” she said.

Acosta then asked a third question, violating the new rules, although Sanders didn’t reference the violation and answered his question.

Acosta had asked about the murder of Washington Post columnist Jamal Khashoggi in Saudi Arabia, claiming Trump “doesn’t believe the CIA” findings on the murder. The alleged confirmation that Acosta referenced was multiple stories relying on anonymous sources, which CNN and other publications have increasingly come to rely upon.

“What we have seen is a number of individuals that we know are tied to that, and those individuals have been sanctioned,” she added.

Unlike on Nov. 7, Acosta did not insist on asking even more questions and ceded the floor to the next reporter. 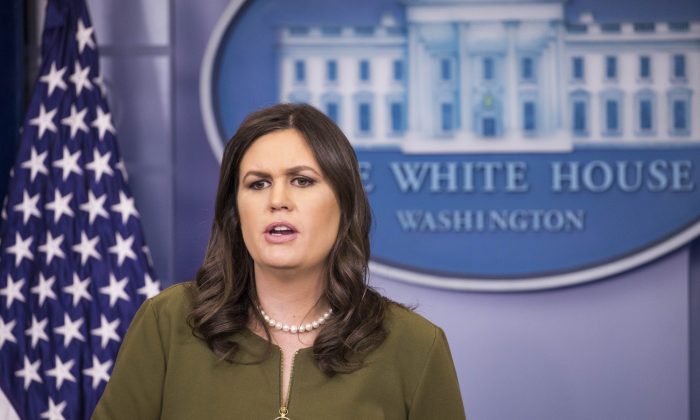