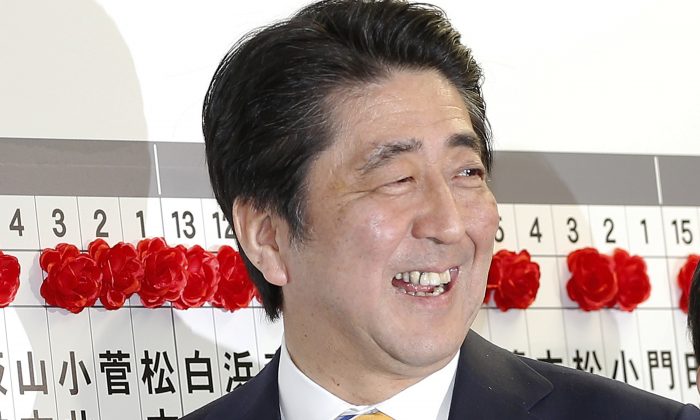 Japanese Prime Minister Shinzo Abe, leader of the Liberal Democratic Party, smiles as he places a red rosette on the name of his Liberal Democratic Party's winning candidate during ballot counting for the lower house elections at the party headquarters in Tokyo, Sunday, Dec. 14, 2014. Japan’s ruling coalition was headed for a landslide victory in lower house elections Sunday, firming up Abe’s hold on power as he prepares to push forward on several politically difficult fronts. (AP Photo/Shizuo Kambayashi)
Asia & Pacific

The conservative Liberal Democratic Party, which has ruled for most of the post-World War II era, locked up a solid majority, and appeared headed to winning at least two-thirds of the House of Representatives together with its coalition partner, the Buddhist-backed Komei party.

In a series of TV interviews from party headquarters, Abe said his top priority was the economy. “Economy first,” he told national broadcaster NHK, adding that he would also tackle other major issues, including national security.

The U.S. government hopes Abe will be able to win passage of a series of bills needed to expand Japan’s military role, so that it can play a bigger part in their alliance. A heated debate is expected when parliament takes up the legislation, likely after local elections in April.

With most of the votes counted, the Liberal Democrats had won more than 280 of the 475 seats in the lower house, and topped 310 with the Komei party, according to NHK. The main opposition party, the Democratic Party of Japan, had won about 70 seats.

The big victory will give a boost to Abe’s agenda, including economic reforms, nuclear plant restarts and his long-term goal of revising Japan’s constitution. But opposition from vested interests and sizeable segments of the public could still stymie his plans.

“I believe the results show that we have received a public mandate for the Abe administration’s achievement over the past two years,” Abe said in a live television interview with Tokyo Broadcasting System. “But we should not be complacent about the results.”

Share prices have risen and many companies have reported record profits, but the recovery has faltered in recent months, with the country returning to recession after a sales tax hike chilled demand among consumers and businesses.

“I believe this shows that voters gave the Abe administration a positive evaluation over the past two years,” said Finance Minister Taro Aso, who retained his seat in parliament. “Abenomics is still halfway through, and I feel a strong sense of responsibility to push it further.”

Despite weakening popularity ratings, a recession and messy campaign finance scandals, the Liberal Democrats were virtually certain to triumph thanks to voter apathy and a weak opposition.

The popularity of the Democratic Party of Japan, which held power from 2009 to 2012, plunged after it failed to deliver on campaign pledges and struggled in the aftermath of the 2011 earthquake, tsunami and nuclear disasters.

“I think Mr. Abe is the only choice we have considering from what I heard and saw in the reports,” retiree Hiroshi Yamada said as he came out of a downtown Tokyo polling station.

Abe’s agenda includes trying to carry out labor market reforms and secure a trans-Pacific trade agreement that faces stiff opposition from the farm lobby and others.

He also hopes to begin restarting some of Japan’s nuclear power plants, despite continued public concerns after the meltdowns at the Fukushima Dai-ichi plant following the 2011 earthquake and tsunami.

Many voters were perplexed over Abe’s decision to call an election.

“I think two years is too soon to decide whether his policy failed or not,” said Yoshiko Takahashi, a Tokyo businesswoman.