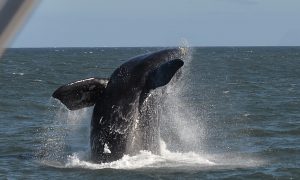 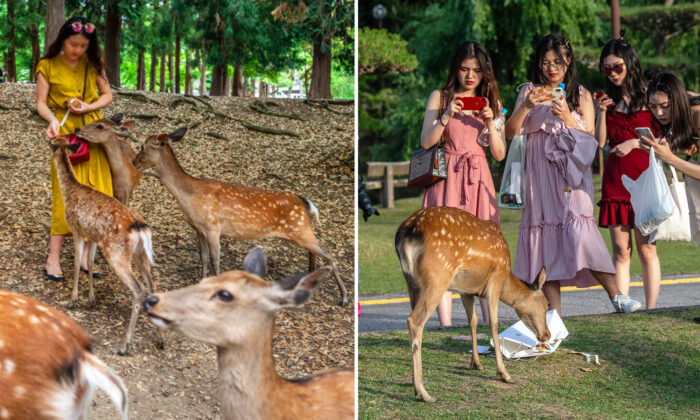 On the sprawling grounds of Nara Park, one of Japan’s largest, at the foot of Mount Wakakusa, millions of tourists come every year to see some very special attractions. Many come for the Tōdai-ji, a 1,300-year-old wooden temple complex that houses the world’s largest bronze Buddha statue, but the most popular draw in the park is its herd of tame sika deer.

Historically believed to be sacred animals, the deer have free reign of the grounds and regularly get fed special rice crackers (senbei) from visitors. Unfortunately, the plastic epidemic that has transformed the planet has also afflicted these special animals. With tourists smuggling in crackers wrapped in plastic and leaving litter in the park, members of the 1,388-strong herd are increasingly getting sick and even dying from consuming the trash.

As the Nara Park Deer Preservation Foundation told The Epoch Times, “From March 14 to October 13 [2019], we found out that 12 out of 18 dead deer in Nara Park had plastic trash in their rumen and 4 of them had more than 2.6 kg. We suspect plastic bags are the main reason of death in 3 deer.”

As tourists illegally smuggle in food from single-use plastic bags to feed the deer, the animals have learned to associate plastic with food. As ruminants, deer ingest food into their first stomach before it moves back through the other stomachs to be fully digested. Veterinarian Rie Maruko of the Nara Deer Preservation Foundation explained to Kyodo News how plastic blocks the normal digestive process. “The deer that died were very skinny and I was able to feel their bones,” she said. “Please do not feed them anything other than the designated shika senbei [deer crackers].”

After deer started dying, the park authorities put up signs all over the area in English and Chinese, as well as Japanese. They also organized a cleanup of the area, removing litter from the deer habitat as well as the areas around the temples and shrines. Over 70 pounds (approx. 32 kg) of plastic trash was collected by volunteers, showing the extent of the problem.

“The amount of plastic garbage we collected was over our expectation,” Yoshitaka Ashimura, secretary general of the Foundation, told CNN. “We are concerned that a mere clean up won’t solve the issue. It’s important that the visitors won’t throw them away to begin with to protect deer.” Historically, visitors have only been allowed to feed the deer the special crackers made for the park and purchased inside its grounds, which are wrapped in digestible leaf rather than plastic.

The problem seems in part to be a result of the massive influx of tourists in recent years. The number of international visitors to Nara Prefecture multiplied tenfold from 2012 to 2017 to a rate of over 2 million per year.

The legend of Nara Park’s deer population goes all the way back to 768 A.D., telling of one of the four gods of Kasugataisha Shrine traveling from the north of Japan all the way to Nara on a white deer. Since that time, the deer that roamed around the Nara shrines were considered to be sent from the gods and not to be touched. Nowadays, the deer are protected under Japanese law as a “national natural treasure,” and injuring or harassing them is a crime.

Unfortunately, the growth of tourism has meant that the deer have become increasingly oriented toward people when it comes to getting their meals. In addition to learning how to bow in order to get food from visitors, as CNN Travel explains, “In their quest for shika-senbei, the deer will happily dig through bags, purses, even strollers.” The park has tried to instill good feeding practices in its visitors, but many of them seem more concerned with getting a good selfie than with the animals’ health.

The rules are straightforward and commonsense, per CNN. “Don’t withhold snacks; don’t tease the deer; don’t refuse them a snack after they offer a proper bow. They’re complicated creatures too, and allowing them to perform for you without delivering the expected reward can cause confusion, and sometimes, anger and aggression.”

It’s not only the plastic issue that causing harm to the deer. According to the Japan Times, incidents with vehicles results in 37 deaths as deer cross roads to try to get more food from tourists. It is hoped that education and cleanup efforts in the park will make a difference for these special mammals that have become victims of their own mass popularity.