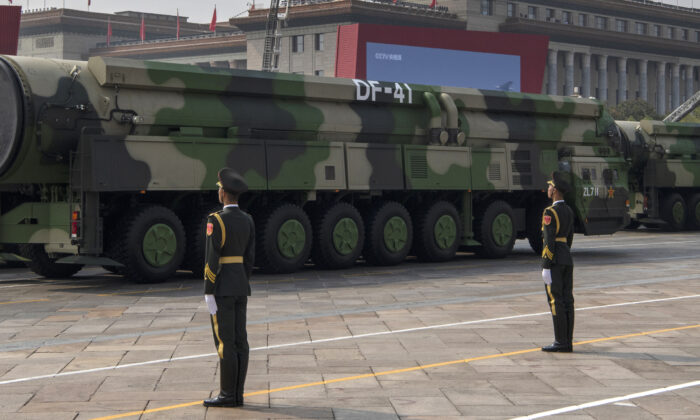 The Chinese military's new DF-41 intercontinental ballistic missiles, that can reportedly reach the United States, are seen at a parade to celebrate the 70th Anniversary of the Communist Party's takeover of China, at Tiananmen Square in Beijing on Oct. 1, 2019. (Kevin Frayer/Getty Images)
Chinese Regime

Kono stated on Sept. 27 that China may claim to have peaceful intentions, but by “deploying air and sea assets in the Western Pacific and through the Tsushima Strait into the Sea of Japan with greater frequency,” the communist country has become a national security concern.

Chinese leader Xi Jinping rode on a red carpet down the Avenue of Eternal Peace in an open-topped limousine past long rows of military gear. Speaking to the communist masses in a gray Mao-jacket, Xi bellowed: “No force can shake the status of our great motherland, and no force can stop the progress of the Chinese people and the Chinese nation.”

Holding the birthday in the same venue that Mao Zedong declared the founding of the “Peoples’ Republic of China” on Oct. 1, 1949, Xi trumpeted Mao and the primacy of the Communist Party.

With ecstatic crowds cheering and waving Chinese flags, Xi trumpeted that “Today a socialist China is standing in front the world.” But Xi warned the world, “No force can stop the Chinese people and the Chinese nation forging ahead.”

The centerpiece of the Chinese regime’s saber-rattling display of advanced communist weapons of mass destruction was the dozen 43-foot long JL-2 submarine-launched ballistic missiles (SLBM) that each have a range of at least 4,500 miles and can deliver a thermo-nuclear payload equivalent to one million tons of TNT. The 12 missile grouping represents the weapons throw weight for each of China’s eight modern Type 094 Jin-class nuclear-powered ballistic missile submarines (SSBN) that now patrol the South China Sea.

Another highly anticipated missile debut was four transporter-erector-launchers each carrying China’s first hypersonic glide vehicle named the Dong Feng 17 (DF-17) from the People’s Liberation Army Rocket Force (PLARF). First revealed in 2017, the highly maneuverable DF-17 travels at about 4,000 miles per hour and is rated by Defense Info as “optimal” for strikes against Taiwan from the PLA bases on China’s eastern coast.

The parade finale featured the first public release of battalion of 16 Dong Feng 41 (DF-41) intercontinental-range ballistic missiles (ICBM) mounted on transporter-erector-launcher vehicles. The 70,000 pound missile can launch in 3-5 minutes to hit most U.S. cities in about 30 minutes. The DF-41 is armed with 3-6 multiple independent targetable reentry vehicle (MIRV) nuclear warheads each rated at 50-100,000 tons of TNT.

The Epoch Times reported in the run-up to the 70th anniversary celebration that China under Xi has embraced a ‘Military-Civil Fusion’ strategy aimed at fully-integrating its civilian industry base into the People’s Liberation Army supply chain.

Japan Air Self-Defense Force also intends to buy at least another 105 F-35As attack fighters that will be equipped with the same Northrup Grumman AN/APG-83 Scalable Agile Beam Radar and integrated theater domination package as the 66 advanced F-16C/D fighters the Trump administration agreed to sell to Taiwan in mid-August.