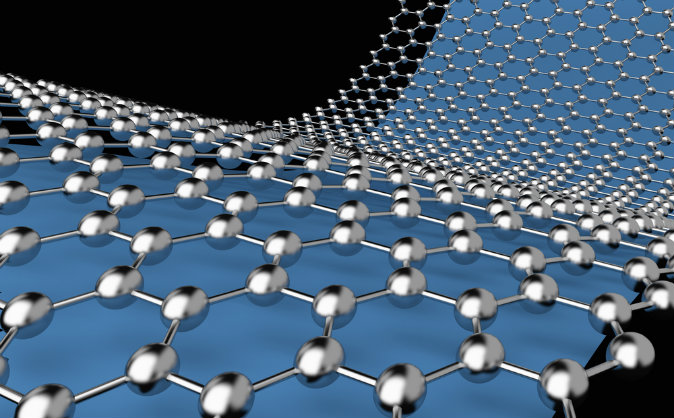 An illustration of graphene. (Shutterstock*)
Good to Know

It’s One Atom Thick, It’s Stronger Than Anything on Earth. What Can We Do With Graphene?

Graphene is a two-dimensional material, one atom thick, that is the world’s thinnest and also its strongest material. It is made of carbon atoms.

It was discovered in 2004 by Andre Geim and Konstantin Novoselov at the University of Manchester, and they won the 2010 Nobel Prize in physics for their discovery. Scientists are just beginning to discover and test the many potential uses for this material. Here are a few:

Swarms of micron-sized machines have hit a development barrier. Communication is key in controlling the swarm, and at that size, it is very difficult to manage, explains a Giz Mag article.

Researchers at Georgia Tech have discovered, however, that graphene can be used to make extremely small antennae that work with about the same efficiency as larger antennae made of conventional materials. We’re closer to being able to create swarms of microscopic machines, for better or for worse.

A computer chip contains millions of transistors. Transistors are components that help the chip make calculations, and they are essential to a computer’s ability to complete complex tasks quickly.

Graphene could allow engineers to pack a phenomenal amount of transistors onto a chip. Graphene conducts electrons thousands of times faster than traditional materials, explains an Extreme Tech article. Because of its size, if researchers one day succeed in creating graphene nanoribbons, they could pack 10,000 times as many transistors onto a chip.

Researchers at the University of California at Berkeley are working on this. They have not yet been able to master the extremely precise feat of creating such a nanoribbon—only 10 to 20 atoms thick, if a few atoms are out of place, it can make the ribbon useless—but they remain hopeful.

Graphene could be used as a thin coating on cars or in buildings to block electromagnetic energy across a high bandwidth. The material is transparent, so it can be used over windows without a problem.

Yang Hao co-authored a study published in the journal Scientific Reports that explores this use of the material.

Hao said in a press release that it could “improve secure wireless network environments.”

Electromagnetic fields have been shown to negatively impact human health. Graphene does not block all electromagnetic energy, but it can absorb some of it and could thus provide some protection.

See “Wi-Fi Could Harm Your DNA”

In December 2013, researchers at the University of Oxford published the results of their experiments with graphene-coated solar cells in an American Chemical Society journal.

They stated: “The graphene nanoflakes provide superior charge-collection … These solar cells show … a power conversion efficiency up to 15.6 percent [the previous record was 8.6 percent]. This work demonstrates that graphene/metal oxide nanocomposites have the potential to contribute significantly toward the development of low-cost solar cells.”

Artificial Graphene, the Next Level

Just as graphene is taking off, a group of European research institutes led by Dr. Efterpi Kalesaki at the University of Luxembourg has developed an artificial graphene that could have even greater potential.

It has the same structure, but it is made from nanometer-thick semiconductor crystals instead of carbon atoms. These crystals can be changed in a way the carbon atoms cannot.

A University of Luxembourg press release states: “Changing the size, shape and chemical nature of the nano-crystals makes it possible to tailor the material to each specific task.”

*Image of graphene via Shutterstock