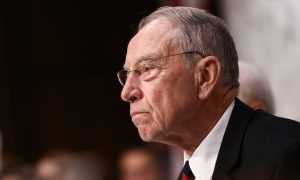 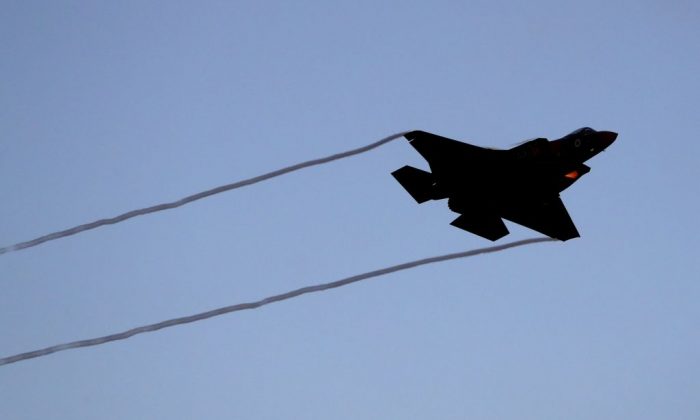 An Israeli fighter jet performs during an air show at the graduation ceremony of Israeli pilots in the Hatzerim Israeli Air Force base in the Negev desert, near the southern Israeli city of Beer Sheva, on June 27, 2019. (JACK GUEZ/AFP/Getty Images)
Middle East

JERUSALEM/DAMASCUS—Israeli aircraft on Saturday struck Iranian forces near Damascus that had been planning to launch “killer drones” at targets in Israel, an Israeli military spokesman said.

“The strike targeted Iranian Quds Force operatives and Shiite militias which were preparing to advance attack plans targeting sites in Israel from within Syria over the last number of days,” the military said in a statement.

The elite Quds Force, also known as the Jerusalem Force or Al Qods, is the overseas arm of Iran’s Revolutionary Guards (IRGC) under the Islamic regime of Ayatollah Khomeini that has supported terrorist activities and armed pro-Iranian militant groups in Syria, Lebanon, the Palestinian territories, Iraq, Afghanistan, and the Gulf state, according to the U.S. State Department.

He added that Israel had monitored the plot for several months and on Thursday prevented Iran from making an “advanced attempt” to execute the plan. Then, Iran tried again late Saturday to carry out the same attack, he said.

“We were able to thwart this attack with fighter jets,” he said, saying the Iranian attack was believed to be “very imminent.”

“This was a significant plan with significant capabilities that had been planned for a few months,” Conricus explained. “It was not something done on a low level, but rather top down from the Quds Force.”

He said Israel’s chief of staff was meeting with senior officers and forces were on high alert near the Syrian frontier.

“Iran has no immunity anywhere. Our forces operate in every sector against the Iranian aggression,” he said on Twitter. “If someone rises up to kill you, kill him first.”

In a major operational effort, we have thwarted an attack against Israel by the Iranian Quds Force & Shi’ite militias. I reiterate: Iran has no immunity anywhere. Our forces operate in every sector against the Iranian aggression. “If someone rises up to kill you, kill him first.”

Witnesses in Damascus said they heard and saw explosions in the sky.

“The aggression is ongoing and air defences are confronting hostile targets and are downing most of them in the southern region,” state media outlet SANA said, indicating areas south of Damascus.

The Syrian army said in a statement that “the majority of the Israeli missiles were destroyed before reaching their targets.” Conricus, however, said the impact of the Israeli strikes was “significant.”

It is not the first time Israel has been forced to defend itself against Iranian-backed forces in Syria, although it rarely confirms air strikes on Syrian territories publicly.

Israel says it has carried out hundreds of strikes in Syria against Iranian targets trying to establish a permanent military presence there and advanced weapon shipments from Iran’s Shiite proxy in Lebanon the Hezbollah terrorist group.

On Thursday, Netanyahu hinted of possible Israeli involvement in a series of blasts in the past few weeks that have hit weapon depots and bases belonging to paramilitary groups in Iraq, many of them backed by Iran.

The Associated Press and The Epoch Times staff contributed to this report.