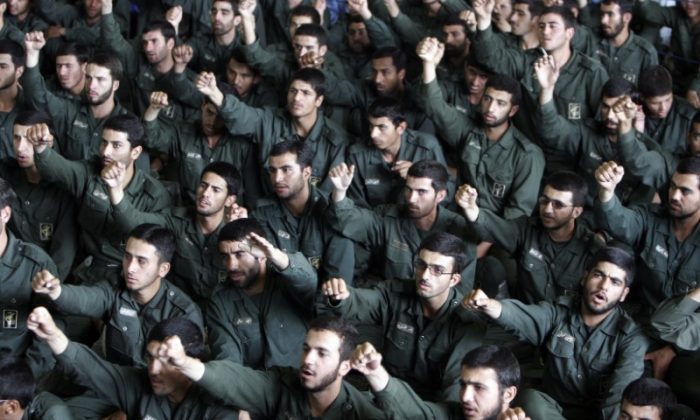 Only weeks after the U.S. State Department officially designated Iran’s Islamic Revolutionary Guards Corps (IRGC) as a terrorist organization, a new, extremely militant commander has been appointed to lead the elite organization.

According to the Times of Israel:

“Salami has frequently vowed to destroy Israel and ‘break America.’ Iran was ‘planning to break America, Israel, and their partners and allies. Our ground forces should cleanse the planet from the filth of their existence,’ Salami said in February. The previous month, he vowed to wipe Israel off the ‘global political map,’ and to unleash an ‘inferno’ on the Jewish state.

“Any new war, he said, ‘will result in Israel’s defeat within three days, in a way that they will not find enough graves to bury their dead.’”

During a July 2016 speech in Tehran, Salami stated, “Today, more than ever, there is fertile ground—with the grace of God—for the annihilation, the wiping out, and the collapse of the Zionist regime.”

Salami continued: “Only in Lebanon, more than 100,000 Qaem missiles are ready for launch … so that any time the Zionist regime seeks to repeat its previous mistakes with miscalculations, these missiles would … come down on the heart of the Zionist regime and be the prelude for a big collapse in the modern era. … They are just waiting for the command, so that when the trigger is pulled, the accursed black dot will be wiped off the geopolitical map of the world, once and for all.”

The appointment of the openly hardline Salami seems to signal that with the U.S.–Iranian nuclear deal now dead, Iran has little to lose and is comfortable (or desperate) enough to remove the mask and take off the gloves.

This is the first time the State Department has ever blacklisted a state entity. All previous listings have been of non-state actors, such as the Communist Party of the Philippines/New People’s Army, Peru’s Sendero Luminoso communist guerrillas, the Soviet-sponsored Popular Front for the Liberation of Palestine, and Hamas, Al Qaeda, and Hezbollah.

Almost all of the groups on the State Department’s official terror list are either directly sponsored by foreign states or are part of networks that receive covert state backing—Iran being a major player.

The IRGC is not a conventional military force. It was formed in 1979 to protect Iran’s Islamic leadership and to spread its influence across the globe. It functioned similarly to the former Soviet KGB as the “sword and shield of the Party,” which was tasked with defending the Communist Party of the Soviet Union at home and projecting the Party’s interests by covert means abroad.

Today, the Revolutionary Guard mirrors the modern Russian intelligence services, which have become a state within a state—or, perhaps, the state itself.

The IRGC is reputedly more than 100,000 strong and controls its own army, navy, and air force. The IRGC also oversees the Basij Resistance Force, a paramilitary wing reputedly marshaling a million “volunteers.”

The Russian parallels are no accident, as Iran’s leadership has been sponsored by Moscow since before the Iranian Revolution.

In 2016, a former jailed Iranian dissident and president of the Iranian Freedom Institute in Washington, Amir Abbas Fakhravar, published the explosive book “Comrade Ayatollah: The KGB’s Role in the Islamic Revolution and The Rise of Khamenei To Power in Iran.”

In the book, Fakhravar reveals that the Iranian Revolution that ultimately produced the most militant Islamic regime in the world was organized from Moscow through Iran’s communist Tudeh Party and bona fide Soviet agents among the Iranian elite.

Unfortunately, so far only published in Farsi, Fakhravar’s book exposes—with original documents—the “extensive Soviet Security Council’s plan to use Shi’a clerics to confront the United States and Israel, plan for the Islamic Revolution, and create widespread chaos and sabotage in Iran to clarify the fire of the revolution and the overthrow of the Shah’s regime.”

In the fifth and sixth chapters of his book, Fakhravar shows the role of Soviet intelligence and its agents, such as Seyyed Ali Khamenei and Seyyed Mohammad Mousavi Khoyini, in the occupation of the U.S. Embassy in Tehran, and crucially in the establishment of the Revolutionary Guards.

After the revolution, the Islamist government wiped out much of the Tudeh, leading many Western observers to believe that Iran’s new leadership was anti-communist.

A better explanation might be that Moscow wanted to use Iran as a proxy in the Muslim world and as a deniable front for terrorist activities.

Clare Lopez, a former CIA officer and an expert in Iranian affairs, wrote, “The Iranians have used classic clandestine tradecraft that their services learned directly from the KGB.”

Lopez also claimed that many of Iran’s current elite, including Supreme Leader Ali Khamenei, were trained in Moscow’s Patrice Lumumba University. Lopez stated that her CIA colleagues used to refer to the school as “KGB Tech.”

Iran is much more useful to Moscow as an Islamic state than as an openly communist one.

According to the U.S. State Department, the IRGC’s Quds Force has supported terrorist activities and armed pro-Iranian militant groups in Lebanon, the Palestinian territories, Iraq, Afghanistan, and the Gulf states.

Both the United States and the European Union have accused the Quds Force of providing weapons and support to help pro-Moscow President Bashar al-Assad suppress uprisings in Syria.

On May 30, 2013, Iranian American dual citizen Manssor Arbabsiar was sentenced in New York City federal court to 25 years in prison for participating in a plot to murder the Saudi Arabian ambassador to the United States.

Arbabsiar told arresting agents that his cousin, whom he had “long understood to be a senior member of the Quds Force,” had approached him in the early spring of 2011 about recruiting narco-traffickers to kidnap the ambassador.

According to the Justice Department:

“He told agents that he then met with CS-1 [confidential source] in Mexico and discussed assassinating the ambassador. Arbabsiar said that afterwards, he met several times in Iran with Gholam Shakuri, … a co-conspirator and Iran-based member of the Qods Force, and another senior Qods Force official, where Arbabsiar explained that the plan was to blow up a restaurant in the U.S. frequented by the ambassador and that numerous bystanders would be killed. According to Arbabsiar, the plan was approved by these officials.”

The current Iranian regime is certainly a very close ally, if not a completely owned proxy, of Moscow. The Revolutionary Guards, the “scimitar and shield” of the ruling regime, is heavily involved in terrorism across the Middle East and wherever Moscow and Tehran’s interests may take it.

The IRGC is indeed a terrorist organization. However, its activities shouldn’t be viewed in isolation but as part of a wider revolutionary axis encompassing Russia and its allies China, North Korea, Cuba, and Venezuela.