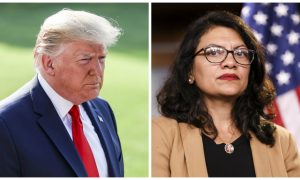 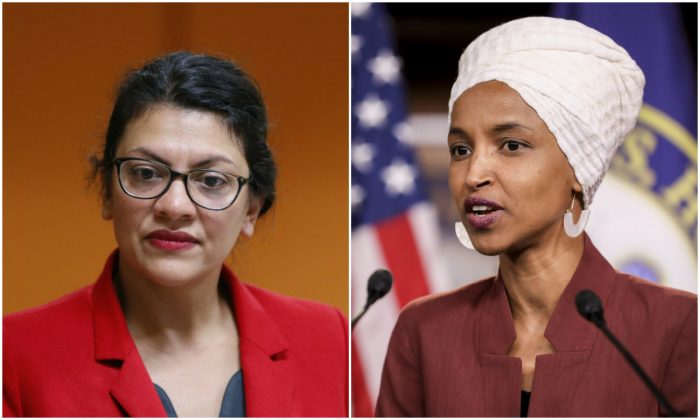 Israel Has Right to Deny Entry to Omar, Tlaib Who Support Group That Seeks to Destroy Country: Former Israeli Ambassador to US

Former Israeli Ambassador to the United States Dr. Michael Oren said Israel has a right to refuse entry to two Democratic lawmakers, who are openly critical of the country, because of their support of an organization that seeks to “destroy the state of Israel through economic strangulation.”

“Every country in the world, not just Israel, has a right to deny entry to those who would hurt that country or certainly want to destroy that country,” Oren told Fox & Friends in an appearance on Aug. 20. “Someone shows up to the United States and says, I’m here because I deny the right of the United States to exist and I’m going to work to try to eliminate the United States, believe me, that person is not getting into a U.S. airport. Same thing here is true.”

“These two members of Congress have supported an organization called BDS, which doesn’t aspire to create a better two-state solution. It aspires to destroy the state of Israel through economic strangulation,” he continued, referring to Boycott, Divestment, Sanctions (BDS), an international movement that aims to isolate Israel by “forcing companies, institutions, and governments” to end economic support to the majority Jewish state. Video footage of the founders of the BDS effort shows them saying they want a one-state solution—Palestine.

His comments come after the Israeli government denied entry to Reps. Rashida Tlaib (D-Mich.) and Ilhan Omar (D-Minn.)—both of whom have been criticized for pushing an anti-semitic narrative—stating that their itinerary “reveals that the sole purpose of their visit is to harm Israel and increase incitement against it.”

During the Aug. 20 interview, Oren underscored the fact that the freshman lawmakers’ trip is sponsored by the organization Miftah, an anti-Israel group that supports BDS and has praised terrorists.

“They were being sponsored by an organization … which not only supports BDS, [but] is known for anti-Semitic comments and for supporting terror. No such country would let such people in unless they had a diplomatic reason,” Oren said.

The Epoch Times previously reported that Miftah is a group that has advocated against the Jewish country on multiple occasions, praised terrorists, and published a neo-Nazi screed.

Israeli Prime Minister Benjamin Netanyahu also drew attention to this group in his statement on Aug. 15.

Omar and Tlaib held a press conference on Aug. 19 to publicly condemn Israel’s decision to bar them from entering the country.

There, Omar took the opportunity to suggest that the United States should retaliate by cutting or reducing its aid to Israel.

“We must be asking, as Israel’s ally, the Netanyahu government stop the expansion of settlements on Palestinian land, and ensure full rights for Palestinians if we are going to give them aid,” she said.

Meanwhile, the White House has expressed support for Israel’s decision to bar the two congresswomen. Spokesman Hogan Gidley said Israel has the right to bar those “who want to destroy it” from entering its borders.

“Congresswomen Rashida Tlaib and Ilhan Omar have a well-documented history of anti-Semitic comments, anti-Semitic social media posts, and anti-Semitic relationships,” Gidley said. “Israel has the right to prevent people who want to destroy it from entering the country—and Democrats’ pointless Congressional inquiries here in America cannot change the laws Israel has passed to protect itself.”

Omar previously drew widespread condemnation earlier in the year for perpetuating anti-Semitic tropes on social media, in one case implying that a prominent pro-Israel lobby group, AIPAC, paid off lawmakers for their support of Israel.

Her comments received bipartisan condemnation and the congresswoman subsequently apologized for her comments. The House passed a watered-down resolution in March that was meant to specifically censure Omar’s comments. The resolution (pdf), approved by a vote of 407–23, was expanded to include other forms of discrimination and omitted Omar’s name.

Along with her comments in February, Omar also received criticism for a 2012 post where she wrote on Twitter: “Israel has hypnotized the world, may Allah awaken the people and help them see the evil doings of Israel.” The tweet has since been deleted.

Similarly, Tlaib said in an interview last year that she is in favor of a “one-state solution” to the Israel-Palestinian conflict, which would essentially end the existence of Israel as a Jewish state.