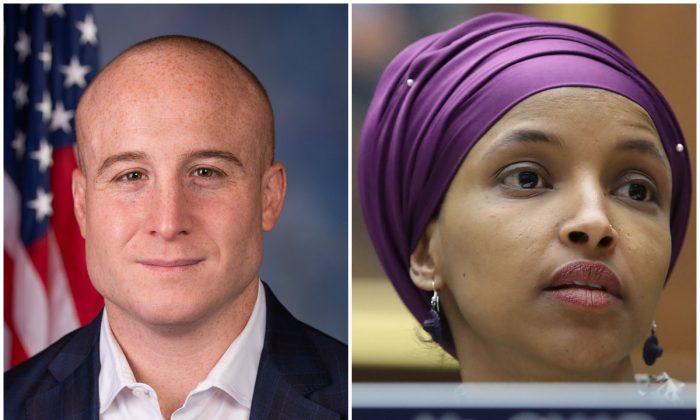 Omar, a freshman Democrat, received backlash for perpetuating antisemitic tropes in early February, when she implied a prominent pro-Israel lobby group, the American Israel Public Affairs Committee (AIPAC), paid off lawmakers for their support of Israel.

Her comments received bipartisan condemnation and the congresswoman subsequently apologized for her comments. Earlier this month, the House passed a watered-down resolution that was meant to censure Omar’s comments. The resolution (pdf), approved by a vote of 407–23, was expanded to include other forms of bias but does not include Omar’s name.

“As a young congressman, I’ve got to tell you I’m sorry,” Rose told the audience gathered by the Council of Jewish Organizations (COJO), reported the Jewish Insider. “You sent me to Congress to take responsibility. You sent me to Congress to have your back … and I failed you. Because I know that Congresswoman Ilhan Omar’s comments really caused you all a lot of pain by bringing up anti-Semitic tropes.”

Along with her comments in February, Omar also received criticism for a 2012 post where she wrote: “Israel has hypnotized the world, may Allah awaken the people and help them see the evil doings of Israel.”

Omar sparked a fresh uproar in late February when she accused some politicians in Washington who supported Israel as having dual loyalty. These comments even earned praise from former Ku Klux Klan leader David Duke.

Dr Duke & Eric Striker: By Defiance to Z.O.G. Ilhan Omar is NOW the most important Member of the US Congress! https://t.co/R4d4X81xdv pic.twitter.com/C083V57VQp

“I want to talk about the political influence in this country that says it is OK for people to push for allegiance to a foreign country,” Omar said. “I want to ask why is it OK for me to talk about the influence of the NRA, of fossil fuel industries, or big pharma, and not talk about a powerful lobby that is influencing policy.”

Rose said that although he was “horrified and sad” by Omar’s comments, he still accepted her apology as well as defended the Democratic leadership’s decision to not remove her from the House Foreign Affairs Committee, saying that her removal would be “escalating” the situation.

“I was horrified and sad when she made the comments,” Rose said. “So horrified that as a freshman member of Congress I stepped in front of my party’s leadership and I was the first member of the Democratic Party to criticize her. I did say that I accepted her apology. You know why I did that? Because I am an adult. Because my goal was to continue the quiet and non-glamorous actions of coalition-building and trying to protect the people in this room from those comments being made.”

“To equate Jewish organizations with the NRA, of course I’m upset. Of course I’m not satisfied and I don’t know any who are either. That’s why the first thing that I said is that ‘I’m sorry,’ I’m sorry because I couldn’t protect you from this. And that takes a lot to say,” he added.

During this saga, President Donald Trump has spoken out against Omar and the Democratic party on numerous occasions. He told reporters in February that her comments were terrible and that he didn’t “think her apology was adequate.” He added that “she should be ashamed of herself,” reported The Hill.

On March 8, a day after the House resolution was passed without Omar’s name, the president criticized the Democrats calling them an “anti-Israel party.”

He said, “I thought yesterday’s vote by the House was disgraceful, because it’s become—the Democrats have become an anti-Israel party. They’ve become an anti-Jewish party. And I thought that vote was a disgrace and so does everybody else if you get an honest answer.”

President Trump: “I thought yesterday’s vote by the House was disgraceful, because it’s become — the Democrats have become an anti-Israel party. They’ve become an anti-Jewish party. And I thought that vote was a disgrace and so does everybody else if you get an honest answer.” pic.twitter.com/TNmPRMwNJA