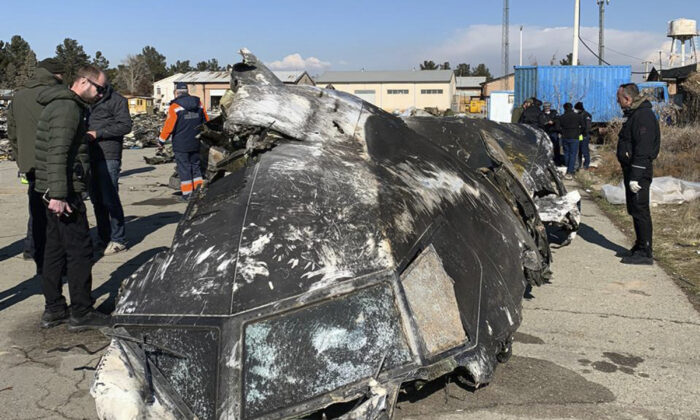 The wreckage of the Ukraine International Airlines Boeing 737-800 at the scene of the crash in Shahedshahr, southwest of the capital Tehran, Iran, in an undated file photo. (Ukrainian Presidential Press Office via AP)
Middle East

The audio file was part of the evidence that was given to Ukrainian experts as part of the joint investigative team’s examination of the crash.

“The technical investigation team of the Ukrainian airline crash, in a strange move, published the secret audio file of the communications of a pilot of a plane that was flying at the same time as the Ukrainian plane,” Hassan Rezaifar said, according to the semi-official Mehr news agency.

“This action by the Ukrainians led to us not sharing any more evidence with them.”

Ukraine’s President Volodymyr Zelensky said on Sunday that Kiev was not satisfied with the amount of compensation Iran had offered to families of Ukrainians killed in the downing of a plane near Tehran last month and would seek more money.

“As for the Iranian side, they immediately offered us $80,000 for each family… It is too small. We will press for a larger amount,” Zelensky told Ukrainian “1+1” TV.

The airliner was struck by a missile on Jan. 8 shortly after it left Tehran en route to Kiev. Iran admitted its forces had shot down the Ukraine International Airlines plane in error, after initially denying it had a role in the incident. All 176 people aboard, including 11 Ukrainians, were killed.