Ukraine Gets Access to Black Boxes From Iran Plane Crash 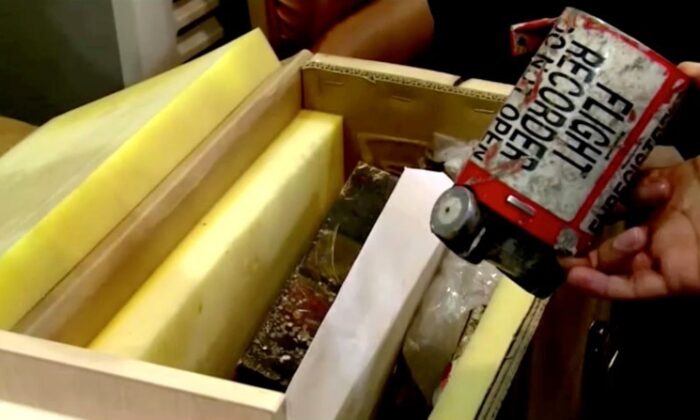 The crate containing purportedly the two black boxes recovered from the crashed Ukrainian airliner, Boeing 737-800, is seen in this still image taken from a video, in Teheran, Iran, on Jan. 10, 2020. (IRIB VIA WANA/Handout via Reuters)
By The Associated Press

Ukrainian Foreign Minister Vadym Prystaiko said on Jan. 10 that his country’s investigators have been given access to the flight data recorders that were recovered from the wreckage of a Ukrainian plane that went down in Iran, killing all 176 people on board.

“Our team has gained access to the ‘black boxes’, we plan to begin reconstruction of the conversations in the near future,” Prystaiko said.

Prystaiko’s comments came as allegations grow that an Iranian anti-aircraft missile shot down the plane.

Prystaiko said investigators also have been given access to the recordings of air-traffic controllers at the Tehran airport.

Although investigators have been to the crash site, he said “there are certain pieces that up until this time have not been found or gathered.”

Service director Ivan Bakanov said that although Western claims of a missile are attracting the most attention, there are still questions to be answered, including the flight range of the presumed missile and the “nuances” of operating the launch mechanism.

He said the possibility of a terrorist attack is being carefully studied.

“We do believe it is likely that that plane was shot down by an Iranian missile,” Pompeo said on Friday.

Pompeo said an investigation would continue into the incident and that once it was complete he was “confident that we and the world will take appropriate action as a response.” Leaders said the plane appeared to have been unintentionally hit by a surface-to-air missile.

The Trump administration on the same day announced a new wave of sanctions on Iran following this week’s missile strikes by the Islamic Republic on U.S. bases in Iraq.

The strike by Iran came in retaliation for the U.S. killing of a senior Iranian general in a drone strike.

Mnuchin said President Donald Trump will issue an executive order imposing sanctions on anyone involved in the Iranian textile, construction, manufacturing or mining sectors. They will also impose separate sanctions against the steel and iron sectors.