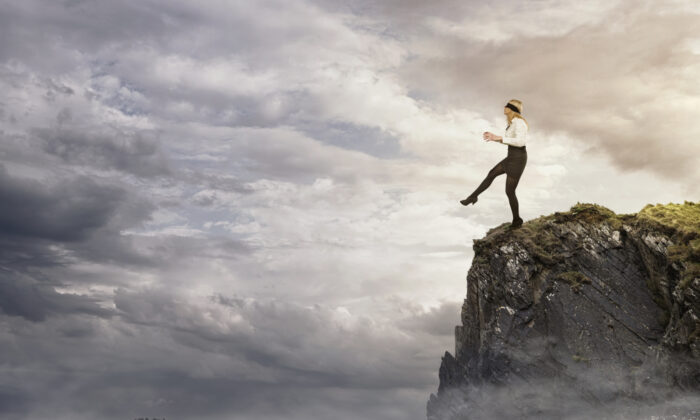 Into the Economic Abyss?

“Battle not with monsters, lest ye become a monster, and if you gaze into the abyss, the abyss gazes also into you.” — Friedrich Nietzsche

Most analysts are pondering whether the upcoming recession will be mild or a “bit more severe.” I do wonder, however, have my forecasting colleagues truly accounted for all things lurking in the shadows of the economy?

As mentioned previously, we envisaged a route to a deep economic contraction in December 2019. In the Special Report, we outlined what we saw as the main inflection points of the coming crisis. We said, “The two inherently-entwined vulnerabilities, where the crisis is likely to start, are: the [U.S.] credit/stock markets, outlined above, and the European banking sector.”

In late 2019, the ECB had just concluded stress testing of the major banks in the Eurozone, and its findings were not encouraging. Through Reuters, “It showed that four banks wouldn’t survive six months if they were frozen out of the wholesale funding market and 52 would go under within six months if financial counterparties and some commercial clients took their money out.”

The ECB noted in its press release that “Universal banks and global systemically important banks would generally be affected more severely than others by idiosyncratic liquidity shocks as they typically rely on less stable funding sources.”

This rang some bells. First of all, according to the findings of the ECB, recession, where withdrawals and bankruptcies of commercial clients tend to manifest, was a threat to the European banking sector. Secondly, the global systemically important banks (G-SIBs), that is, major global banks in the Eurozone would be likely to get hurt the most. From the 30 G-SIB’s globally (pdf), 10 reside in the euro area. That is why any banking crisis originating from the European common currency zone would go global in an instant.

In the December 2019 report, we also envisaged how the collapse of the credit markets would proceed: “In the onset, stresses already building in the junk bond markets will explode, making the ‘exit doors’ from that market extremely small. Downgrades of corporate debt in the U.S. and sovereign debt in the Eurozone will push large fixed-income investors, like pension funds, to higher-rated bonds, leading to large-selling of lower-rated bonds, forcing wider spreads and even more selling.

“Panic will build in the junk bond markets, and swathes of junk bond investors will lose everything. A frantic retreat to ‘safe-haven’ assets, including U.S. Treasuries, German Bunds and UK Gilts as well as precious metals will commence.”

Everyone can ask oneself, how far you think, we are from such an inflection point in the U.S. credit/asset markets?

The European banking sector is a trickier creation.

The main problem was that only a marginal fraction of European banks were allowed to fail during the Panic of 2008. This effectively “zombified” the European banking sector.

In total, 114 European banks received government support during the crisis. The recovery of bailed-out banks was slow, despite the fact that the ECB provided ample liquidity and they were allowed to carry non-performing loans and assets on their balance sheet. This meant that:

Effectively, the balance sheet of the European banking sector was divided into three layers. The first included the good assets, which were held mark-to-market,” meaning that their value was based on actual daily market quotes. The second layer included assets that had lost value, but which the banks could pretend had not.

The third layer, we named as the “dark pit,” included assets that were nearly or totally worthless, but banks could still pretend they had some value and keep them on their books. According to information we received, banks had considerable latitude in determining the value of these assets compared to their purchase price, a practice some have called “mark-to-fantasy.”

The coronavirus bailouts during and after the Spring of 2020, grew the “bubble” in the asset and credit markets to a monstrous size. Similarly, lockdowns and now the war-related costs are surely starting to wreak havoc among European banks. In the most recent Q-Review, published on July 7, we warned of yet another threat lurking in the background. That is, widespread shortages of goods and energy possibly hitting the European continent, and the globe, during fall/winter.

Looming shortages and an energy crisis would bear massive losses to corporations and push them into bankruptcies. The combination of ravaging inflation, rising interest rates, and bankruptcies will, almost surely, push some European banking giants “over the cliff.”

In the December 2019 report, we also envisaged how the crisis would proceed after the “Counterattack” of authorities eventually failed. We wrote: “Fiscal stimulus, by those countries which can afford it, will be too little too late. Most of the governments of the Eurozone, for example, are too indebted to engage in any meaningful stimulus especially when faced by cascading bank problems and failures. Due to the collapse of the banking sector, Europe is unlikely to see much fiscal stimulus.

“China will desperately try to enact one, but due to the collapse of global demand and the likely implosion of the housing and debt bubbles in China, it will be a ‘drop in the ocean.’ It will still probably provide support for a brief period of time. Yet, China’s massive debt mountain will eventually crush its economy. This in its turn will remove all support from under the global economy.

“Global trade will collapse. Protectionism, including tariffs and other ‘protective’ measures may help some domestic businesses, but ultimately make the world economy worse by further depressing already-moribund global trade. Calls for [Modern Monetary Theory] and other massive money-conjuring operations are likely to be made.”

Alas, the truly worrying question is, what will nation states do when the economic crises and shortages hit? Will they resort to protectionism essentially closing at least some parts of the global trade? If so, we could see an abrupt end to the current age of globalization, which would wreak havoc in our economies.

We are effectively standing in the middle of an ever-widening fault line between the comforting narrative of authorities and economic realities. I cannot help to think that we are already staring into the (economic and financial) “Abyss.”

There are “monsters” hiding in the dark corners of our financial system and the economy. The only question is when they start to gaze back at us? It may happen sooner than many think.