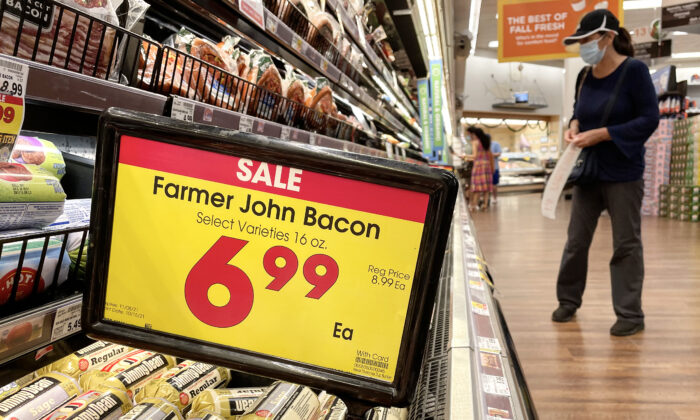 A person shops in the meat section of a grocery store in Los Angeles, Calif., on Nov. 11, 2021. (Mario Tama/Getty Images)
Inflation

Inflation concerns and, to a lesser extent, lingering worries about the pandemic drove U.S. consumer confidence down to a nine-month low in November, according to The Conference Board.

The Conference Board’s consumer confidence index fell in November to a reading of 109.5, down from 111.6 in October, according to a Nov. 30 release. The downtick represents the lowest reading in the measure since it hit 95.2 in February.

“Expectations about short-term growth prospects ticked up, but job and income prospects ticked down. Concerns about rising prices—and, to a lesser degree, the Delta variant—were the primary drivers of the slight decline in confidence,” Lynn Franco, Senior Director of Economic Indicators at The Conference Board, said in a statement.

The survey period didn’t cover the recent emergence of the new Omicron variant of the CCP (Chinese Communist Party) virus, the spread of which appears to have triggered a renewed sense of anxiety, sparking sell-offs in risk assets like stocks and fueling investor interest in havens like U.S. Treasurys.

Franco said that the Conference Board’s survey also showed a decline in the proportion of consumers planning to buy homes, cars, and major appliances over the next six months, casting a shadow over the trajectory of the recovering economy, which is heavily reliant on consumer spending.

While the Conference Board expects that the economic expansion will continue at least into early 2022, Franco said that “both confidence and spending will likely face headwinds from rising prices and a potential resurgence of COVID-19 in coming months.”

The drop in The Conference Board’s consumer confidence index follows an even sharper fall this week in the University of Michigan’s gauge of consumer sentiment, which in November declined to a decade-low, driven chiefly by concerns about surging inflation and a growing conviction among respondents that no effective policies have been put in place to tame runaway prices.

The university’s consumer sentiment index fell to a reading of 66.8 in November, down nearly 7 percent from October’s reading and a 10-year low.

“Consumer sentiment fell in early November to its lowest level in a decade due to an escalating inflation rate and the growing belief among consumers that no effective policies have yet been developed to reduce the damage from surging inflation,” Richard Curtin, the survey director, said in a statement.

Inflation has emerged as a key theme of the post-pandemic economic recovery, rising faster than wages and eroding the purchasing power of Americans.