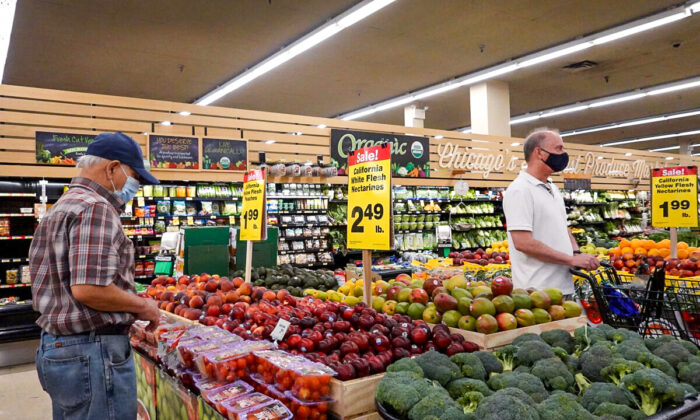 Customers shop for produce at a supermarket in Chicago, Ill., on June 10, 2021. (Scott Olson/Getty Images)
Inflation

U.S. consumer sentiment plunged to a decade low in November, according to a University of Michigan survey, which blamed inflation and a growing sense among Americans that no effective policies have been put in place to rein in surging prices.

The university’s most recent consumer sentiment index fell to a reading of 67.4 in November, down around four percentage points from October’s reading of 71.7 percent and a 10-year low.

“The decline was due to a combination of rapidly escalating inflation combined with the absence of federal policies that would effectively redress the inflationary damage to household budgets,” Richard Curtin, the survey director, said in a statement.

Curtin said one in four people responding to the survey “cited inflationary erosions of their living standards” while respondents universally “expressed less optimism in the November 2021 survey than any other time in the past decade about prospects for their own finances as well as for the overall economy.”

The sharp surge in inflation has emerged as a key issue amid the post-pandemic economic recovery, rising faster than wages and eroding the purchasing power of Americans.

“Inflation concerns are weighing on consumer confidence,” Bankrate Chief Economic Analyst Greg McBride told The Epoch Times in an emailed statement. “When household costs rise faster than income, it puts the squeeze on buying power, which in turn holds back economic growth.”

While average hourly earnings rose 4.9 percent in the year through October, the Labor Department said in its most recent release on U.S. earnings data (pdf), the higher 6.2-percent pace of over-the-year consumer price inflation means that wages actually contracted by around 1.3 percent in real terms.

The Michigan sentiment survey showed that more consumers in November than in October expected their real incomes to decline.

“Consumers anticipated declining inflation adjusted incomes,” Curtin said, adding that they also expect inflation-related spending cutbacks to have a negative impact on the economy in the coming year.

For now, consumers have shown no signs of holding back on spending due to high inflation, with a Nov. 24 Commerce Department report showing that consumer spending, which accounts for around two-thirds of U.S. economic output, jumped 1.3 percent in October after rising 0.6 percent in September.

And a recent report from the Boston Consulting Group (pdf) showed that a net 18 percent of U.S. consumers plan to spend more shopping on Black Friday this year than the last.

But recently-released minutes from a Fed policy meeting in early November showed officials worried about persistent price pressures, softening their tone on the “transitory” inflation narrative, and acknowledging the growing risk that future inflation expectations could become de-anchored, potentially leading to changes in spending patterns and driving up wage demands.

While Fed officials judged that the elevated price pressure was mostly driven by production bottlenecks and other factors that they expect to be temporary in nature, they agreed that they should make the case for “transitory” inflation less forcefully. They also vowed to use monetary policy to try and tame higher prices if inflationary pressures become more entrenched.