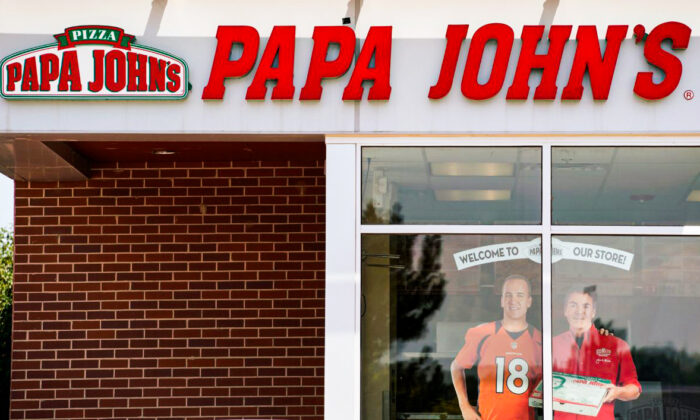 Tom Ozimek
Reporter
Tom Ozimek has a broad background in journalism, deposit insurance, marketing and communications, and adult education. The best writing advice he's ever heard is from Roy Peter Clark: 'Hit your target' and 'leave the best for last.'
View profile
Follow
and Steve Lance

John Schnatter, founder of the Papa John’s pizza chain, said that the combination of supply chain problems, surging inflation, and the labor shortage are pushing up costs for businesses, hurting quality, service, and the bottom line.

“We’re seeing a lot of pressure now at Papa John’s and throughout the economy,” Schnatter told NTD News in an interview, commenting on the impact of inflation, which in the year through January hit a fresh 40-year high of 7.5 percent.

“It’s definitely having a significant impact on everybody’s cost—and that includes Papa John’s,” he added.

“We simply can’t get people to come to work,” said Schnatter, adding that staffing problems have led product and service quality to suffer.

“And now all of a sudden, we have to raise prices,” he said, describing the combination of the labor crunch and inflation as a “double-edged sword” that’s cutting into Papa John’s customer base.

Schnatter’s remarks on the painful impact of inflation echo concerns raised by many of America’s businesses.

A recent survey from the National Federation of Independent Business (NFIB), found that a record-high number of small business owners cited inflation as their single most important business problem.

“Small businesses across the country are feeling the impact of the highest inflation rate in 40 years,” Kevin Kuhlman, NFIB vice president of Federal Government Relations, said in a statement.

“For most small business owners, this is a new and challenging environment that they have to navigate along with the ongoing labor shortage and supply chain disruptions,” he added.

The cost of primary inputs for businesses surged to a record high of 9.8 percent in the year through November, slowing only slightly to 9.7 percent in December—the latest month of available data.

Surging input costs have in many cases been passed on to consumers, with the NFIB report showing that the net percentage of small business owners raising prices in response to higher costs has risen to its highest level since 1974.

U.S. wage growth data confirms that businesses are raising compensation to attract and retain workers. Average hourly earnings of all private-sector employees rose by 23 cents to $31.63 in January, for an over-the-year increase of 5.7 percent.

While American workers are sure to view the wage acceleration with glee, the higher pace of inflation means those gains have been more than erased and purchasing power has declined. Real average hourly earnings, which are adjusted for inflation, declined 1.7 percent in the year through January.