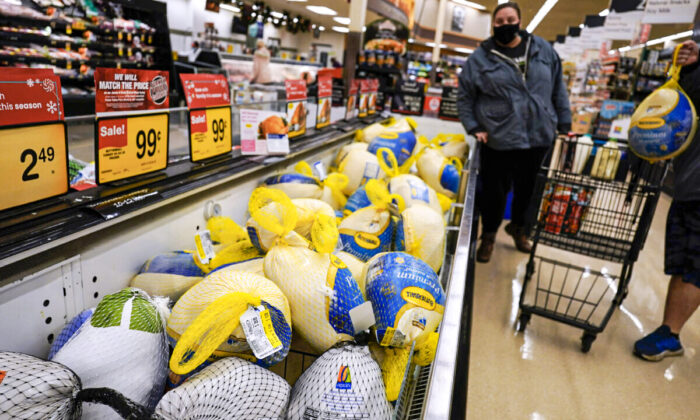 Inflation in the United States picked up its pace once again, accelerating to an annual 7.5 percent in January, the highest rate in 40 years and above analysts’ expectations, according to data released by the Bureau of Labor Statistics (BLS).

January’s acceleration in the Consumer Price Index (CPI), which reflects inflation from the perspective of end consumers, marks the eighth straight month of prices rising faster than 5 percent year-over-year and a faster pace than December’s 7.0 percent pace.

On a month-over-month basis, the pace of headline CPI inflation held steady at 0.6 percent in January, matching December’s pace and delivering a fresh sign of inflation stuck in high gear.

Consensus forecasts predicted a 7.3 percent rate of annual CPI and a 0.5 percent reading in the monthly measure.

Inflation Risks ‘Tilted to the Upside’

Not only is January’s annual pace of CPI inflation the highest since February 1982, when it hit 7.6 percent, it is also far above the Federal Reserve’s target of 2 percent as reflected in a separate but related inflation gauge, pressuring policymakers to tighten loose monetary settings to knock some of the wind out of surging prices.

“Inflation readings in the U.S. are at their highest levels in nearly 40 years, and nominal wages are accelerating at a faster pace than we have seen in decades,” Loretta Mester, president of the Cleveland Fed and a voting member of the Federal Open Market Committee (FOMC), said in prepared remarks on Wednesday for a virtual event hosted by the European Economics and Financial Centre.

Noting that inflation risks are “tilted to the upside,” Mester said she backs raising the Fed’s key interest rate in March.

“While the Omicron variant may weigh on activity in the near term, the high levels of inflation and the tightness in labor markets make a compelling case to begin recalibrating the stance of monetary policy,” she said.

Wages have shot up in the United States, adding to fears of a possible wage-price spiral of the sort that bedeviled the U.S. economy in the 1970s. Average hourly earnings of all private-sector employees rose by an annual 5.7 percent in January, which was the highest on record with the exception of a sharp, one-month increase in wages in April 2020. That’s when millions of relatively low-paid workers lost their jobs while their relatively high-paid counterparts remained employed, with the structural shift in employment composition leading to a boost in average wages.

In her speech, Mester touched on the risk of a wage-price spiral, saying that if longer-term inflation expectations become de-anchored, price pressures could stay elevated for even longer.

“Allowing inflation to remain at high levels can lead firms, households, and financial market participants to expect higher inflation over the longer term. A rise in longer-term inflation expectations could then spill over into wage- and price-setting dynamics, leading to even more persistent inflation,” she said.

While Mester, like other Fed policymakers, expects some improvement in inflation readings later in the year as supply-side constraints ease and demand softens, she said that there was uncertainty around the timing and magnitude of the projected decline.

While Mester said the economic data doesn’t make a “compelling case” for a 50-basis-point hike in March, she stressed it was time for the Fed to roll back accommodative monetary policies more aggressively. She added that each FOMC meeting is going to be “in play” and the pace of rate hikes will depend on what happens with inflation and the economy.

Markets are pricing in five rate hikes through 2022.

Meanwhile, so-called core CPI inflation, which strips out the volatile categories of food and energy and is considered a better measure of underlying inflationary pressures than the headline CPI figure, also picked up its pace in January.

“Not only have home prices jumped 20 percent in the past year, but now many rents are too, rising 0.5 percent in the past month alone. Nothing squeezes household budgets more than the outsized increases we’re currently seeing on costs for shelter and housing,” he added.

McBride said Fed moves to dial back easy money settings would take some wind out of demand but do nothing to fix the supply-side constraints, suggesting inflationary pressures would take longer to lose steam.

President Joe Biden, who has repeatedly said he believes inflation will fall once supply-side bottlenecks and other pandemic-related dislocations abate, doubled down on that sentiment in a statement reacting to Thursday’s data on rising prices.

“While today’s report is elevated, forecasters continue to project inflation easing substantially by the end of 2022,” Biden said.

Biden added that his administration would do all it can to “win this fight” against surging prices, singling out such measures as shoring up domestic supply chains, pushing for cheaper prescription drugs, and promoting more market competition.

*This article has been updated to include President Joe Biden’s statement.