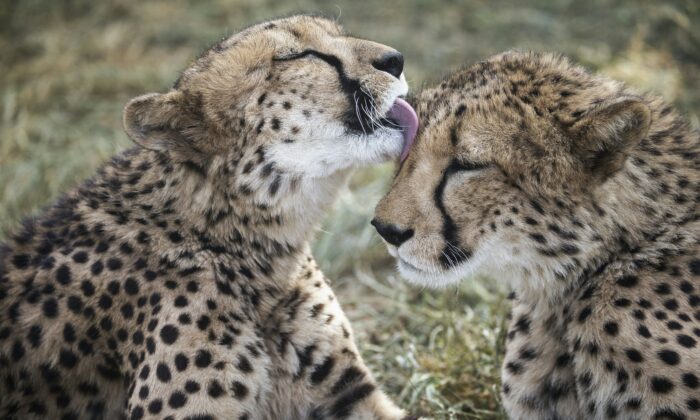 A captive cheetah licks her sibling in an enclosure at the Cheetah Conservation Fund in Otjiwarongo, Namibia, on Feb. 18, 2016. (GIANLUIGI GUERCIA/AFP via Getty Images)
Environment

India and Namibia have signed an agreement to relocate eight African cheetahs to India in the hopes of seeing wild cats establish themselves in the Asian nation, where Asiatic cheetahs have been declared extinct since 1952 due to over-hunting and habitat loss.

The two countries signed a memorandum of understanding on July 20 to promote the conservation and restoration of cheetahs to the habitat range of the species before it disappeared from recorded sightings.

The cheetahs from Namibia are expected to arrive in India by Aug. 15, coinciding with India’s independence day, and will be relocated to the Kuno wildlife sanctuary in Madhya Pradesh in central India. They will remain for a trial one year period.

Happy to share that India has signed a historic MoU with Namibia to promote Wildlife Conservation and Sustainable Biodiversity Utilization. The MoU seeks to promote conservation and restoration of cheetah in their former range from which the species went extinct. pic.twitter.com/MNVyw8S2eQ

The environment in Kuno National Park is estimated to be able to support a maximum of 21 cheetahs, which would be increased to 36 cheetahs when the Kuno wildlife division is restored, according to the Indian environment ministry.

“The main goal of cheetah reintroduction project in India is to establish viable cheetah metapopulation in India that allows the cheetah to perform its functional role as a top predator and provides space for the expansion of cheetah within its historical range,” the ministry said.

Environment Minister Bhupender Yadav said the return of cheetahs in India would “rekindle the ecological dynamics of the landscape” and, in the long run, enhance local community livelihoods through eco-tourism prospects.

“Cheetah as a flagship species will lead to greater focus on the status of the dry-open forest [or] savanna ecosystems and the need to restore and manage them,” he said in a post on Twitter.

The project will show whether the African cheetahs will be able to adapt to India’s climate and ecology.

Yadav said the India-Namibia deal would help to facilitate cheetah conservation in both countries by exchanging expertise, use of technology, and sustainable management of biodiversity.

“Cheetah reintroduction in India has a larger goal of re-establishing ecological function in Indian grasslands that was lost due to extinction of Asiatic cheetah. This is in conformity with IUCN guidelines on conservation translocations,” he added.

The government’s initial plan was to start relocating 20 cheetahs, but this was reduced to eight cheetahs because the Madhya Pradesh government lacked funds for species management, the Times of Hindu reported, citing unidentified officials.

The state-owned Indian Oil Corporation has allocated Rs50 crore ($6.29 million) for the project.

Namibia has the world’s largest population of wild cheetahs, with over 3,500 individuals. Yadav said in January that India is aiming to relocate 50 cheetahs in various national parks over the next five years.

“Conservation of cheetahs has a very special significance for the national conservation ethic and ethos. The very name ‘Cheetah’ (Acinonyx Jubatus Venaticus) originates from Sanskrit and means ‘the spotted one’,” the Indian government stated.

Cheetahs, the world’s fastest land animal, are listed as a threatened species by the International Union for the Conservation of Nature (IUCN) and are considered “critically endangered” in North Africa and Asia.

“The low density of cheetahs throughout their range means they require conservation action on a scale that is seldom seen in terrestrial conservation,”the IUCN said.

The conservation action includes transboundary cooperation, land use planning across large landscapes to maintain habitat connectivity, and human wildlife conflict mitigation, according to a statement released by the World Wildlife Day.

Earlier efforts to reintroduce Asiatic cheetahs to India from surviving wild populations in Iran failed in the 1970s due to the upheaval of the Iranian revolution.