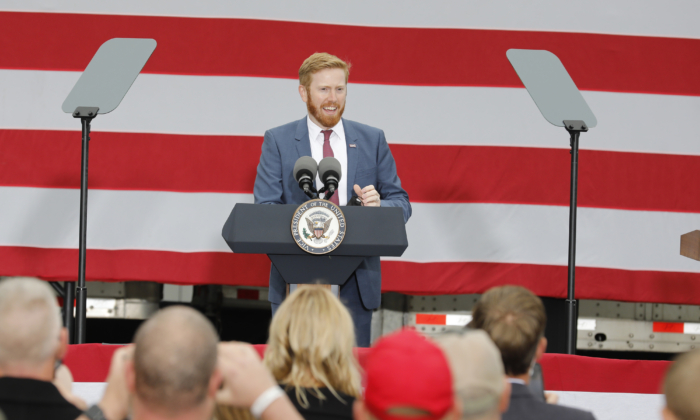 One of 10 House Republicans who voted to impeach President Donald Trump, Rep. Peter Meijer is fighting to remain in Congress beyond his freshman term.

Meijer, whose surname is familiar because of his family’s national supercenter chain that is based in Michigan, will face John Gibbs in the state’s 3rd Congressional District primary on August 2.

Endorsed by Trump, Gibbs was a U.S. Department of Housing and Urban Development (HUD) official during the Trump administration. He was appointed by Trump to lead the Office of Personnel Management but was not confirmed by the U.S. Senate.

That alone would make it a compelling race. The added element of redistricting elevates this to one of the most closely watched elections nationwide as Republicans strive to regain control of the U.S. House and Democrats try to flip the seat.

Meijer or Gibbs will meet Democrat Hillary Scholten in November’s general election in a newly drawn 3rd District that once favored Republicans but is now friendlier to Democrats.

Michigan’s political districts saw little change for several decades when they were handled by state legislators.

In 2018, a constitutional amendment transferred authority to the Michigan Independent Citizens Redistricting Commission, which includes four Republicans, four Democrats, and five individuals not affiliated with a major party.

The district has not seen a Democratic congressional member since 1993, but with the new map, organizations like the Cook Political Report, Inside Elections, and Sabato’s Crystal Ball rate the general election as a toss-up.

Gibbs grew up in the Lansing area, but he did not live in west Michigan until last year.

He earned a bachelor’s degree in computer science from Stanford University and a master’s degree in public administration from Harvard University, served as a missionary in Japan, and worked in Silicon Valley as a software engineer before his role with the housing department.

First elected in 2020, Meijer is a Columbia University graduate and the son of Meijer executive chairman Hank Meijer. He served in the Army Reserves from 2008 to 2016, including a one-year deployment to Iraq.

Gibbs and Meijer applaud the overturning of Roe v. Wade, and they support gun ownership rights and do not approve of Biden’s policies, but they drastically differ about Trump and the 2020 presidential election.

Three days after Meijer was sworn into the 117th Congress as a freshman legislator, he cast his vote to impeach Trump after the U.S. Capitol breach on Jan. 6, 2021

It was a vote of conscience, Meijer said.

“I’ll be honest, this is something I agonized over,” Meijer told NPR about the decision. “You know, I read the articles and they were appropriate. They were what we experienced and what happened. I had to vote ‘yes’ and support that impeachment.”

Gibbs, who has called for a complete forensic audit of the 2020 presidential election, says that Meijer’s vote to impeach Trump “is a big issue. It is the elephant in the room that looms large over everything else.”

“I’m sure he’s a very good person, but I think politically when he made that decision, he had to accept the consequences that came with it. And I think this is one of those consequences of voters in his district, are very, very upset about it,” Gibbs told Fox 17 West Michigan.

Meijer remains adamant that he made the right decision, and he also believes that President Joe Biden was duly elected.

Rep. Tom Rice (R – S.C.) also voted to impeach Trump, and he remained outspoken against the former president leading to South Carolina’s Republican primary in May when he was trounced by challenger Russell Fry by almost 27 percentage points.

For months, Meijer embraced his role as a Trump antagonist through media interviews and social media posts, but he has mostly remained quiet about the impeachment decision in recent weeks.

Meijer’s predecessor in the House was Justin Amash, who served as a Republican for eight years before becoming an independent and eventually switching to the Libertarian party in his fifth and final term. Amash cited the GOP’s allegiance to Trump as the reason he made the decision. He was the first GOP lawmaker to call for Trump’s impeachment in 2019, and he voted to impeach the president that year.

Initially, Meijer ran against Amash before Amash announced in July 2020 that he would retire and not seek another term.

When he was nominated by Trump to direct the Office of Personnel Management in 2020, Gibbs was confronted with tweets he posted when he was a political commentator, including a 2016 tweet when he called the Democratic party “Islam, gender-bending, anti-police, ‘u racist!’”

During his confirmation hearing, Gibbs said the comments were in his past and that he is the grandson of black sharecroppers and does not tolerate racism.

Meijer is funded by organizations like the Super PAC called Principled Leadership for Michigan, which has provided $757,000 to his campaign, according to disclosures.

Meijer has also received $10,000 each from Majority Committee PAC, which is led by House Minority Leader Kevin McCarthy; and the leadership PACs of Minority Whip Steve Scalise (R-La.) and Kinzinger; and $5,000 from the leadership PAC of Rep. Liz Cheney (R-Wyoming).

The Democratic Congressional Campaign Committee has waded into the 3rd District primary by placing a $425,000 ad buy in the Grand Rapids media market reminding voters of Gibbs’ ties to Trump.

“Gibbs has promised to push that same conservative agenda in Congress—a hard line against immigrants at the border—and so-called patriotic education in our schools.”

At first glance, the spot appears to attack Gibbs, but it also provides airtime for a campaign that has not had the money to elevate its name recognition on television.

“The DCCC boosting John Gibbs is clear evidence of who [House Speaker] Nancy Pelosi prefers in this race,”  Meijer Spokesperson Emily Taylor said in a statement. “We are confident that voters will see through Democrats’ political games while Peter remains focused on the issues that matter most to the people he represents.”

Gibbs believes that his background and his grassroots following will propel him to victory on Aug. 2.

“Money does matter—yes,” Gibbs told an audience during a campaign stop at a Baptist church earlier this month.

“You need enough money to get your name out there and pay your staff. But it doesn’t quite mean what it used to. People are getting sick of money being able to buy elections.”

Polling on the race has been minimal so far. A February survey conducted by Impact Research showed that Gibbs had 37 percent support compared to 19 percent for Meijer while 38 percent were undecided. At the time, other contenders were in the field and gained 6 percent.

On June 1, Scholten’s campaign released a Public Policy Polling survey placing Scholten at 39 percent and Meijer at 37 percent in a head-to-head matchup in November.

The report indicated that Scholten had a 44 percent to 35 percent advantage over Gibbs.