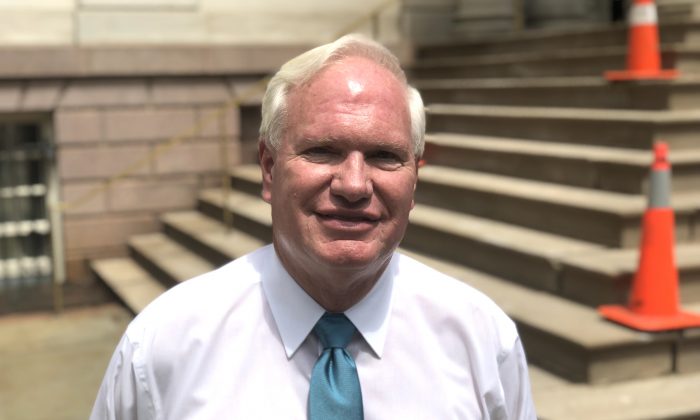 NEW YORK—Standing near the steps of City Hall on July 31, New York state Sen. Tony Avella gave a look of reproach upon hearing a familiar name had again entered the political ring.

“I think every citizen pays a lot of attention to following the law,” Avella told The Epoch Times. “As a candidate wanting to represent the people, you have to set an example. He [Liu] has not. He has flouted the campaign finance laws time and time again.”

According to a recent financial disclosure report, a political committee dubbed “No IDC NY,” spent a total of $11,693 to provide recent petition services on Liu’s behalf, but the committee’s spending had already exceeded the primary limit contribution by thousands of dollars this year. Both the senator and the candidate are Democrats.

Liu’s campaign also missed the deadline on July 16 to file its financial disclosure statement with the New York State Board of Elections.

“I just think it’s wrong that somebody with such an obvious flouting of the campaign finance laws is running again,” Avella said.

Any candidate who fails to comply with requirements on the disclosure statement may be subject to financial penalties. Liu’s campaign has a history of breaking such laws. During his 2013 mayoral campaign, two of his top aides were sent to prison after they were found guilty of using straw donors to illegally funnel contributions.

Liu, himself, was fined $26,000 by the CFB just last year in relation to the straw donor scheme.

Liu’s former campaign committees, “Friends of John Liu” and “People for John Liu,” also failed to file recent financial disclosure reports despite the accounts still being active, according to a recent letter sent to officials from Avella’s campaign committee.

“Is he paying the fine? I mean he’s asking people to vote for him who pay their property taxes, who if they get a ticket—they pay the ticket. But meanwhile, he doesn’t want to do the same thing that the average voter does,” Avella said. “I think it’s a disgrace.”

“I don’t think any candidate should be allowed to run for the office with such a scandalous record. I really don’t,” Avella continued. “It’s a shame on the system that somebody, who apparently abuses the system and doesn’t follow the laws, can run.”

Liu was under federal investigation in 2013 but was not charged for fraud himself after the undercover operation was shut down prematurely after a New York Times article blew the lid on the FBI investigation. The special agent involved in the operation said that everything in the investigation “points to the next level.”

But the contentious issues surrounding his campaign go deeper than just finances.

In 2007, Liu personally met with leaders connected with the Chinese Communist Party (CCP). During the overseas trip, he met up with vice president of the Overseas Chinese Affairs Office, Xu Yousheng, who works with one of the regime’s primary foreign espionage offices that also helps monitor and harass overseas Chinese communities.

One of Liu’s fundraisers, Xing Wu “Oliver” Pan, was also found to have ties to the Chinese regime. Pan, a businessman, was executive vice chairman of the Fukien American Association which is affiliated with the Fuk Ching gang, known for its involvement in human trafficking, extortion, and protection rackets, according to a report published by the National Institute for Justice.

The Fukien American Association is also one of the main organizations in Chinatown that organizes events for visiting CCP officials. Liu’s dealings with the association continued in his 2013 mayoral campaign through Pan.