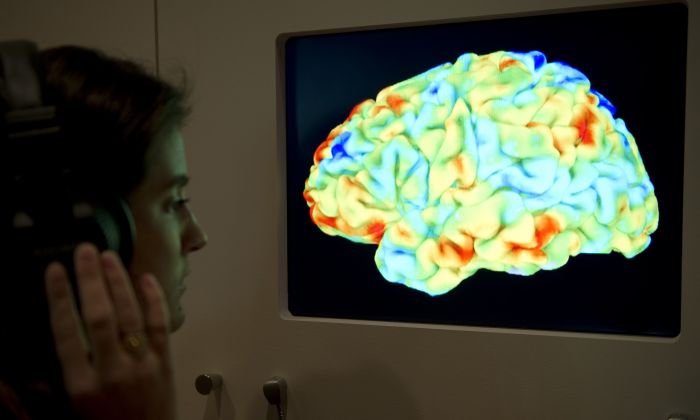 A woman looks at a functional magnetic resonance image (fMRI) showing the effect of Stravinsky's Rite of Spring and Kant's 3rd Critique on the human brain during the Wellcome Collection's major new exhibition "Brains: mind of matter" in London on March 27, 2012. (MIGUEL MEDINA/AFP/Getty Images)
By Nicole Hao

The secretive technology is kept under wraps, but tens of thousands in China say they have suffered from its deleterious effects.

Through online forums, many have shared about how they suddenly experienced mind-altering symptoms, such as hearing voices or seeing images that others can’t. They believe they have been targeted by authorities as unwitting “mind control technology” test subjects.

The symptoms are similar to those reported by several U.S. diplomats working at the U.S. consulate in Guangzhou City, in China’s Guangdong Province. They said they heard “abnormal” sounds and felt sensations of air pressure. Afterward, they showed signs of “mild traumatic brain injury.”

Jinnie Lee, a spokeswoman for the U.S. Embassy in Beijing, told The Associated Press at the time that a U.S. government employee first reported a variety of physical symptoms between late 2017 and April 2018.

At the time, the U.S. State Department said it would investigate the incident, noting that it was similar to an incident in 2017, when about 40 diplomats at the U.S. Embassy in Havana, Cuba, also reported falling ill after hearing an unusual sound. That led to speculation that they were attacked by a sonic or electromagnetic weapon.

Brain scans of affected U.S. embassy staff in Cuba revealed abnormalities in their brain tissue, The Guardian reported in July.

A China-based NGO, whose name translates to “Against Concealed Technical Control” in English, was established to assist victims of such attacks to file lawsuits against local authorities.

The Chinese-language Epoch Times interviewed several victims as well as the NGO’s representative, who recounted their experiences.

A man using the surname of Zhong—to protect himself from reprisals by the Chinese regime—has organized victims to file joint lawsuits against 24 provincial governments since 2016, as well as six national-level suits since 2017.

Zhong said that the victims come from different age, social, educational, and working backgrounds, and are from places all across China. That’s led him to believe that provincial governments are each involved in their own “mind control” testing.

Victims have reported experiencing similar symptoms since the 1980s. For decades, victims felt mental and physical distress, with some choosing to take their own lives as a result of the torment, but local courts have refused to hear the victims’ cases. Many are confined at psychiatric hospitals as a result.

Zhong said that in an attempt to silence him, authorities have also forced him into a psychiatric hospital.

Li Da, an engineer and former deputy general manager at the Shanghai Taidao Control Engineering Company, said he was a victim of “mind control technology.” He told the Chinese-language Epoch Times that beginning in 2015, many victims joined an online message board, called “Global Mind Control Forum,” to share their experiences.

By the time the forum was shut by censors in 2017, it had more than 70,000 members who registered with their real names, valid contact information, and their reported symptoms.

A man from Beijing surnamed Wang, a former director of the sports division at a large Chinese media group, told the Chinese-language Epoch Times that around 2016, he began hearing extraneous noises whenever he picked up his phone, including during phone calls with his mother in the United States.

“I kept hearing a third person talking to me [during phone calls],” Wang said.

Eventually, Wang began hearing voices. “Whatever I had on my mind, that voice was able to verbalize it. Moreover, only I could hear it, and others couldn’t.”

The situation became worse and worse.

“It follows you all the time, like your shadow. … the voice could get to know your private thoughts and memories, including your weaknesses, shortcomings, past wrongdoings. Then, he [the voice] would take advantage of this knowledge to humiliate, scorn, and berate you, and go to the extreme in verbal attacks.”

Wang tried to figure out the source.

“In one experiment, I stayed inside a room and used newspaper printing metal plates [which can block electromagnetic waves] to cover the walls, ceiling, and floor. In this closed room, I found that … the disturbing voice could not read my mind anymore.”

The voice also interfered with his daily living.

“I would inevitably fall asleep when driving for longer than 10 minutes. It was not a deep sleep, but a state of quasi-sleep, and I had absolutely no control over it,” Wang said. He was involved in four car crashes in less than a year.

That convinced Wang that the voice was controlled by someone conducting a “mind control” experiment.

Wang said that he sought out a friend who is a senior official within the Chinese Communist Party. This friend confirmed to him: “There is mind control technology, and our government treats it very seriously.”

He believes he’s been targeted by authorities because his sister is a technology expert in the United States; he had refused to submit to pressure from the government to convince his sister to supply trade secrets to Beijing, he said.

Others who sought help with the NGO recounted similar experiences.

Yao Duojie, a former manager at a five-star hotel in Shenzhen City, told the Chinese-language Epoch Times that since 2007, he had been disturbed by strange voices, as well as irritating and terrifying messages that would appear before his eyes.

“Whatever I think about, whatever I do, whatever I see, the voice will verbalize it. Some time later, there were also intimidating messages, saying that someone will kill me or arrest me. At a later stage, as soon as I closed my eyes, unpleasant images would appear [in my mind]. I lived in terror day in and day out. I felt that my situation was like that of a mental patient,” Yao said.

Chinese authorities have admitted to the existence of such technology, but only to explain that other governments have conducted related experiments.

“Whether the secretly selected test subjects are in a private residence, public space, industrial setting, or on public and private transportation, they can be affected by the chemical and biological stimuli emitted by the mysterious weapon,” state broadcaster China Central Television reported in 2008. “After a long period of time, the test subjects will become socially isolated and their immunity will go down, leading to various diseases and even death.”

The Chinese Communist Party’s mouthpiece newspaper People’s Daily reported in May 2012: “Soldiers who were attacked by such weapons have altered behavior, and become like ‘zombies’ who can be easily controlled. They can be ordered to turn off the engine of a tank.”

The report added that “mind control” technology can cause soldiers to kill each other.

In January, a U.S. congressional study on “nuclear EMP” weapons developed by China, Russia, Iran, and North Korea was declassified and published, offering more insight into EMP weapons that can cripple infrastructure.

A Chinese NGO published a report in February about “mind control” technology, after affected individuals conducted their own research.

A military official based in Xuzhou City, Jiangsu Province, who was involved in developing “mind control” technology told the NGO in June that the Chinese regime has a machine “that can interfere or attack a person’s brain from thousands of kilometers [1 kilometer = about 0.62 mile] away. It can connect the person’s brain, monitor his or her intention, control his or her autonomic nervous system, and can even stop the beating of his or her heart,” the official said.

The NGO study concluded that the machine mentioned by the official likely had the ability to emit electromagnetic waves at the same frequencies as a human brain.

The device can emit an electromagnetic wave that mimics real human frequencies to the target person, creating a fake feeling or hallucination, or controlling the subject’s bodily functions, according to the study.